About
/
Board of Directors
/
Downey Bridgwater 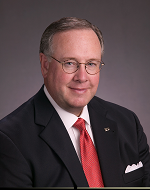 J. Downey Bridgwater is Chairman, President, Chief Executive Officer, and Chief Risk Officer of Sterling Bancshares Inc. and Sterling Bank. Mr. Bridgwater began his banking career at the First National Bank of McAlester, Oklahoma. In 1979 he joined Allied Bank (later acquired by First Interstate Bank) where he spent the next 11 years holding positions of increasing responsibility, including serving on the Bank's merger team during its consolidation with First Interstate. Mr. Bridgwater then joined Charter Bank in 1991 as Senior Vice President of Corporate Banking. In 1996 he joined Sterling Bank as CEO of the Memorial office. Mr. Bridgwater was named President of Sterling Bank in 1998, CEO in 2002, and Chairman in 2005.

Mr. Bridgwater is a graduate of the University of Houston and a Senior Fellow of the American Leadership Forum. He serves on numerous community and professional boards including the Texas Medical Center, The University of Texas Health Science Center, BioHouston, Houston Technology Center, and University of St. Thomas. He is also a member of the Bauer College of Business Deans Executive Board at the University of Houston, the Smith-Hutson Endowed Chair of Banking Advisory Board at Sam Houston University, the Greater Houston Community Foundation, Community Foundation Council, and the Development Committee of the Archdiocese of Galveston-Houston. Mr. Bridgwater and his wife Kerri are active members of St. Anne's Catholic Church.