About
/
Board of Directors
/
John L. Nau 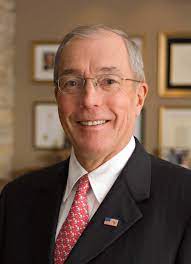 John L. Nau, III, has served as president and CEO of Silver Eagle Distributors since 1990. Under his leadership, it has become one of the nation’s largest distributors of Anheuser-Busch products and is responsible for distribution of all Anheuser-Busch products in the Greater Houston region.Nau serves on the executive committee of the National Capital Campaign of the University of Virginia and as chairman of the College of Arts and Sciences campaign.
In 1993, Nau was appointed to the Texas Historical Commission to serve a six-year term. In January 1995, he was elected chairman and was reappointed to the commission in 1999 by then-Gov. George W. Bush.
In 1998, Nau was elected to the board of The Civil War Trust. He also serves on the Texas State History Museum Advisory Committee and on the board of the Downtown Historic District. He is an advisory board member for the Greater Houston Preservation Alliance.
Nau graduated from the University of Virginia with a bachelor’s degree in history.