About
/
Board of Directors
/
Kathy Banks 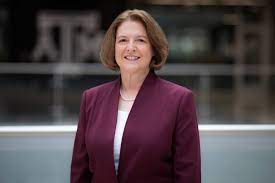 M. Katherine Banks is the 26th president of Texas A&M University, which is one of the largest universities in the United States with more than 71,000 students and 10,000-plus faculty and staff members. She also serves as Vice Chancellor of National Laboratories and National Security Strategic Initiatives for the Texas A&M University System through her involvement with Los Alamos National Laboratory and the George H.W. Bush Combat Development Complex at the RELLIS campus.
Prior to June 1, 2021, Banks served for nine years as vice chancellor of engineering and dean of Texas A&M’s College of Engineering. She coordinated and collaborated with the engineering, academic and research programs at seven universities throughout the Texas A&M System, as well as three state agencies. Those entities include the Texas A&M Engineering Experiment Station (TEES), the Texas A&M Engineering Extension Service and the Texas A&M Transportation Institute.
Banks also served as TEES director, overseeing research administration, technology commercialization and technology workforce development. Between the engineering agencies, she had oversight of $310 million in sponsored research. As dean, University Distinguished Professor and holder of the Harold J. Haynes Dean's Chair in Engineering, Banks led one of the largest engineering schools in the country with 21,000 students and 700 faculty.
The longtime national leader in higher education established Texas A&M’s Engineering Medicine program, EnMed, which is an engineering medical school program designed to educate physicians who will create transformational technology for health care.
Banks is a member of the National Academy of Engineering and an Elected Fellow of the American Society of Civil Engineers. She is a board member and principal executive engaged with Triad National Security, LLC for the management and operation of Los Alamos National Laboratory. Banks is the principal investigator for a $65 million cooperative agreement with the U.S. Army Combat Capabilities Development Command Army Research Laboratory. This cooperative agreement is part of the A&M System initiative with Army Futures Command and the new Bush Combat Development Complex, a $130 million investment by the A&M System and the State of Texas.
She received her BS in engineering from the University of Florida, MS from the University of North Carolina at Chapel Hill, and PhD in civil and environmental engineering from Duke University.