About
/
Board of Directors
/
Lesia Crumpton-Young 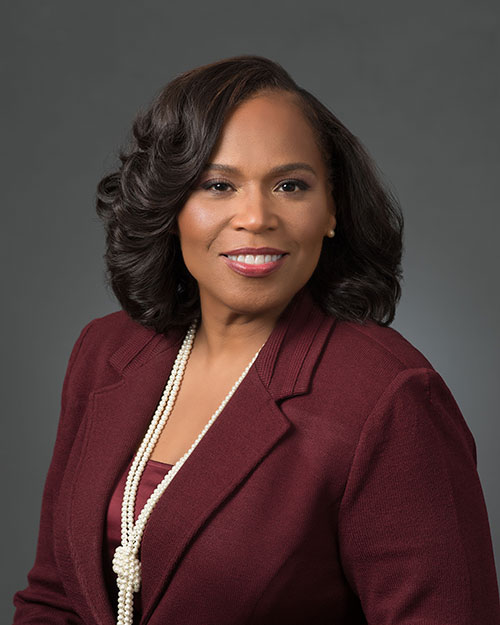 She previously served as Provost and Senior Vice President for Academic Affairs at Morgan State University (MSU), where she has led innovative and data-driven adjustments to campus operations and pedagogical shifts in response to COVID-19. She served as the Vice President of Research and Institutional Advancement and Chief Research Officer at Tennessee State University, where she significantly increased the new research awards at the university, which advanced the university's national research ranking. In addition, she led an initiative to create a 90-acre Research and Innovation mixed-use district at Tennessee State University and served as Director of the Center for Advancing Faculty Excellence (CAFÉ), which conducts research and provides professional development services for assisting faculty and students in enhancing their effectiveness, performance and productivity.

Dr. Crumpton-Young also served as the Associate Vice-President at Tennessee State University, where she assisted in restructuring faculty workload policies, enhanced faculty incentive programs, and engaged more students in research and innovation programs. At Texas A&M University, Dr. Crumpton-Young served as Associate Provost. She also had the distinction of being a Program Director at the National Science Foundation. She served as Department Head and Professor of the Industrial Engineering and Management Systems Department at the University of Central Florida (UCF), where Dr. Crumpton-Young led her department to become the first to be ranked in US News and World Report, and she received the "National 2006 Outstanding Women of Color in Science and Technology Educator Award" and the "Trail Blazer Award" for being the first female to serve as a Department Head within the College of Engineering.

Dr. Crumpton-Young was also the first woman to serve as Associate Dean of Engineering at Mississippi State University (MSU) and served as the developer and Director of the Ergonomics/Human Factors Experimentation Laboratory during her tenure at Mississippi State University. She was one of the first women to receive the "Hearin-Hess Distinguished Professor of Engineering Award." She also received the 1999 "Janice A. Lumpkin, Educator of the Year Golden Torch Award" from the National Society of Black Engineers. In 1997, Dr. Lesia L. Crumpton-Young received the "Black Engineer of the Year Education Award," which is given to the one candidate whose qualifications place him/her in the ranks of the nation's highest achievers in the field of engineering.

Dr. Crumpton-Young received the US Presidential Award for Excellence in Science, Mathematics, and Engineering Mentoring (PAESMEM) from President Obama for her achievements in helping to diversify the STEM Workforce in our nation. Dr. Crumpton-Young is a current fellow in the African Scientific Institute and holds the distinction of being one of the first African-American females to reach the rank of Full Professor in Engineering in the country. She has served on the National Science Foundation (NSF) Congressional oversight Committee on Equal Opportunities in Science and Engineering (CEOSE), the NSF Engineering Advisory Committee, and the United States Army Science Board. Dr. Crumpton-Young also currently serves on several national advisory boards focused on increasing the underrepresented students successfully completing degrees in STEM fields. She is a member of Phi Kappa Phi, Beta Gamma Sigma, Alpha Kappa Mu, and Golden Key International honor societies.

Dr. Crumpton-Young received her BS, MS and Ph.D. in Industrial Engineering from Texas A&M University. She holds the distinction of being the first African-American female to receive a Ph.D. in Engineering and she holds an MBA degree from Tennessee State University. She is an accomplished researcher and scholar and recipient of the STEM Innovators award in 2017. As a researcher, she has served as Principal Investigator on numerous research projects, published numerous scholarly publications and was awarded nearly $6 million in research funding.

Her publications include the book entitled "Key Productivity and Performance Strategies to Advance Your Career," co-authored the book entitled "Company Success in Manufacturing Organizations: A Holistic Systems Approach," authored a workbook entitled "Advancing Your Faculty Career" and co-authored the "You've Got The Power!" workbook series dedicated to empowering individuals to unleash their greatness. Dr. Crumpton-Young was the founder and former CEO of PowerfulEducation Technologies, a company dedicated to enhancing youth and adults' personal and professional development throughout our nation. She also served as founder and Executive Director of the Power Promise Organization, a non-profit entity dedicated to helping students realize the promise of a brighter future.

Dr. Crumpton-Young has been married for 29 years to Mr. Reginald Young and is the mother of two beautiful daughters, Mattlyn, age 22, a Biology/Pre-Med Graduate from Hampton University, and Ashlee, age 20, Junior Psychology Major at Prairie View A&M University.