About
/
Board of Directors
/
Uwem Ukpong 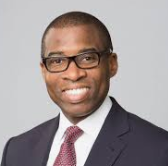 Uwem Ukpong is Executive Vice President, Regions, Alliances & Enterprise Sales for Baker Hughes. In this role, he is responsible for identifying and realizing growth opportunities through deep customer relationships around the world and market-backed strategic partnerships.

Uwem began his career at Schlumberger, where he held multiple oilfield services operating roles, including petrophysicist, and reservoir engineer. He served as President of Schlumberger Software, where he was responsible for overall strategic development of oil and gas software and services covering reservoir characterization, production optimization, and drilling to solve exploration and production challenges. He also held executive positions in HR and regional operations.

Uwem holds a Bachelor of Science degree in mathematics and computer science and a master’s degree in petroleum engineering from Heriot-Watt University, Edinburgh, United Kingdom.