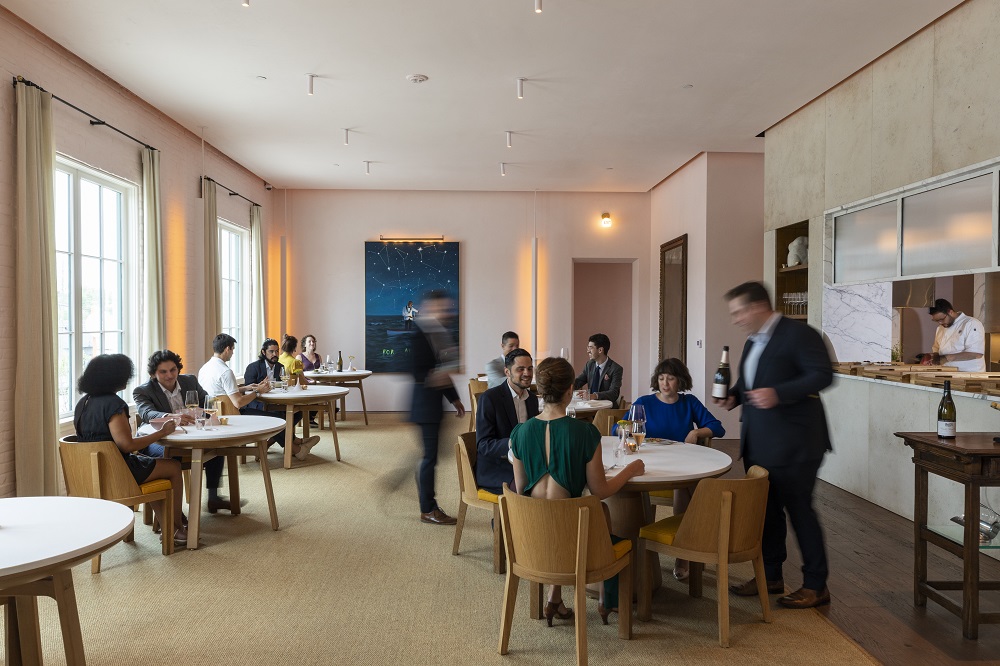 The Houston restaurant scene — once dominated by traditional steakhouses, barbecue joints and Tex-Mex cantinas — has evolved over the last two decades into one of the most sophisticated and diverse dining landscapes in the nation. Here you’ll find delectable dishes from across the globe in line with the city’s expansive expat communities — from Vietnamese and Indian to Polish and Ethiopian. Foodies have come to expect a constant flow of new flavors and options in a city with more than 10,000 restaurants, and Houston restaurateurs do not disappoint. Here are a few places that have opened in recent months and are shaking up the dining scene.

Several tasting menu-driven concepts have debuted of late, including Degust in the Spring Branch area, which offers up a mix of Spanish and Mexican-inspired dishes. Chef Brandon Silva employs Japanese techniques in this intimate, highly sustainable, farm-to-table concept. The menu changes regularly, but expect produce-forward dishes like turnips two ways, smoked tomato with radish and caramel and scallop with a tomatillo aguachile.

Chef Lance Fegen gained a following among Houston foodies for his Liberty Kitchen concept that began in the heart of Houston Heights. Now back in that original location, his namesake project, Fegen’s, dishes out old-school American classics alongside Italian favorites. Think salmon crudo and chicken saltimbocca meets skirt steak and grilled Alaskan halibut.  Then there’s the extensive wine list and inventive cocktail menu from beverage director Nicole Meza. It’s all happening in a warm, cozy atmosphere filled with nostalgic images and deep, rich tones that make this a perfect spot for an intimate date night.

The wife and husband duo of Erin and Patrick Feges have been wowing Houston diners with their distinctive approach to barbecue for years. Patrick first began smoking meats through pop-ups and catered events in 2012 while he continued to train with some of the best chefs in town. The couple opened the first Feges BBQ in the Greenway Plaza area in 2018 and more recently expanded to Spring Branch. Expect exceptionally prepared meats, including pork ribs, brisket, pulled pork and burnt ends, as well as outside-the-box sides such as sweet and spicy sprouts, Moroccan spiced carrots and chana masala. Also catch Feges at the Urban Harvest Farmer’s Market on Saturday mornings for vacuum-sealed smoked meats you can enjoy at home.

Another tasting menu concept has opened in Montrose, courtesy of Goodnight Hospitality. Located above Rosie Cannonball on an eclectic stretch of Westheimer is March, a Mediterranean driven fine dining restaurant helmed by Chef Felipe Riccio. Diners have the option of six or nine-course tasting menus inspired by the coastal regions along the Mediterranean. Though the menu changes regularly, expect to find dishes like couscous with sea urchin and goat cheese mousseline. The restaurant is also gaining a reputation for its expansive, 11,000-bottle wine selection.

Set on the ground-level of one of Downtown Houston’s most iconic buildings, The Nash is serving an impressive assortment of plates — from pizzas and steaks to Venezuelan-style tequenos and a delectable short rib pappardelle. Located in the Star, formerly the Texaco Building, this spot offers impressive floor-to-ceiling windows overlooking the bustle of the central business district. With Chef Omar Pereney at the helm, The Nash is serving a slice of the diverse, modern American menu. Be sure to dine on the elegant patio when the weather is nice.

The Houston Farmer’s Market, the city’s oldest and largest market of its kind, is getting a major upgrade that will transform it into a world-class dining destination. Aiming to play alongside the likes of Washington D.C.’s Union Market or Pike Place in Seattle, the reimagined Houston Farmer’s Market is combining a diverse array of produce and foodstuff vendors with new restaurant concepts from some of the city’s most recognized chefs. Two concepts from Chris Shepherd’s Underbelly Hospitality, Underbelly Burger and Wild Oats, are on the horizon along with a new outpost of the much-loved Chinatown favorite Crawfish & Noodles. Set to open within months, the restaurants will surround the market’s iconic central stalls where you’ll find produce and spices from around the world.

It simply doesn’t get more intimate than Neo. The sushi concept from former Uchi chefs Luis Mercado and Paolo Justo doesn’t have its own storefront or much other infrastructure, like a phone number. Rather, it's held in a Montrose clothing store and reservations are made via Instagram for just four to six diners per night. Needless to say, it’s not an easy reservation to lock down, but it’s worth the wait for 15 to 20 courses of fresh nigiri, sushi and more complex plates.

Gatsby’s Prime Steakhouse is looking to evolve the concept of the traditional steakhouse. With an elegant, modern interior dominated by antique chandeliers and dark accents, Gatsby’s offers a sophisticated experience in a storied Montrose space. The appetizer menu offers favorites such as foie gras, crab cakes and tuna tartare while the entrees provide a mix of the turf (rack of lamb, bone-in ribeye and wagyu filet to name a few) and surf (twin lobster tails and ahi tuna among other options). As one might expect, there’s an extensive wine and cocktail menu as well.

Midtown has long been known for its nightlife, less so its dining options. Kanau Sushi, located on the ground floor of one of the neighborhood’s newest residential high-rises, aims to change that. The smallish restaurant offers diners fabulous Japanese-style dishes, including poke tacos, pan seared scallops, and tempura ika (fried squid with a spicy aioli). You’ll want to sample several of the maki, including the signature Kanau roll with salmon and asparagus topped with ikura.

Another restaurant power couple igniting the dining scene are Chef Aaron Bludorn and Victoria Pappas — the formerly of New York’s much-lauded Café Boulud and she of the Houston-based Pappas restaurant family. Last year, the duo opened Bludorn on Taft Street in Montrose, where Chef Aaron is showing off his love for Gulf Coast fare prepared with classic technique. To get started, try the oysters everyway (just like it sounds) and the squash blossom with ricotta, basil and pepper jam. From there, it’s a journey to either land or sea, where you’ll find lamb served with apricot, mint and yogurt or the house favorite lobster pot pie.

Houstonians love brunch, and 93 ‘til is doing it right. Located near the Menil Collection, the homey hotspot is serving up cocktails and grub along with hip-hop tunes. Chefs Gary and Lung Ly deliver a menu filled with their interpretation of favorites like the chicken sandwich and a classic double-patty burger along with more inventive fare such as Romanesco “Kung Pao” and a cucumber gazpacho. The craft cocktail selection is a boozy adventure — try the 24 Carrot Magic of EVOO fat washed toki with a carrot simple syrup.

Mustaafer translates to "a traveler" and that's just what you are in this Indian feast for the senses located in the Galleria. The stunning two-story restaurant offers multiple rooms, each with its own distinctive, elegant look and feel. The menu is a trek across the states of culinarily diverse states of India. You'll find lamb kebabs and baked oysters, lentil with coconut soup and beef vindaloo and a laal maas (smoked goat) with mathania chili that's simply delectable. The restaurant is open for dinner only during the week and both lunch and dinner on the weekends.

A massive new mixed-use development just north of I-10 on Shepherd is sure to become a culinary destination as a wide range of new restaurant concepts open within weeks. The four-acre M-K-T Heights will soon be home to Anglo-Indian restaurant Da Gama Canteen, Houston-centric concept Homestead Kitchen & Bar, Blue Sushi Sake Grill and several others. The project will also include soft goods retailers along with a number of services and a small park.