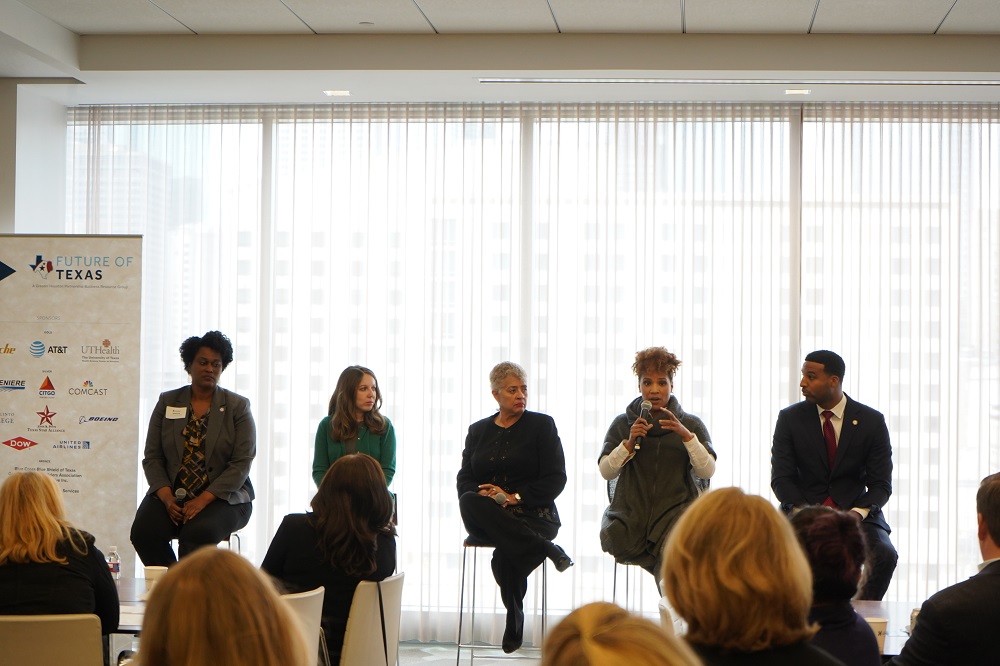 Providing opportunity for all and a great quality of life through quality city services was top of mind for five Houston City Council Members at the Greater Houston Partnership on Friday. They addressed a sold-out room at a Future of Texas event and included:

Here are highlights from the discussion:

Opportunity for All: Providing high-quality education to Houston students

The panel answered questions regarding the city’s role in supporting education in the city and collaborating with regional partners to improve opportunity for all.

Council Member Evans-Shabazz, a former Houston Community College Board of Trustee Chairwoman, discussed the importance of the city’s role in supporting education. She said that it is important for the city to help ensure school safety, including cleaning up communities around schools to foster a safe environment for students. Council Member Evans-Shabazz also discussed workforce development as a priority for residents in the area she represents, District D.

Council Member Thomas agreed. As a former member of the Alief ISD Board of Trustees, she said that as a business community and a city, we need to think differently about leveraging our efforts in workforce development to address Houston’s workforce gap. You can read more about the Partnership’s efforts to strengthen the region’s talent pipeline, here.

Vice Mayor Pro-Tem Castex-Tatum addressed public education in Houston. She said that it is incumbent upon the city to support all school districts in the region, and it is incumbent on city leaders to work closely with school districts, including Houston ISD, to support those districts. Vice Mayor Pro-Tem Castex-Tatum concluded, that great communities have great schools, and quality of life within communities is strongly tied to education.

Council Members also discussed the city’s response to Hurricane Harvey and how to build a more resilient Houston.

Council Member Pollard said that the city’s response to severe weather events needs to be multi-pronged. He called on city leaders to go into each impacted community to talk with residents and learn how flooding affects them and to learn from them how Houston should improve its mitigation efforts. He emphasized that city leaders need to convene experts from Harris county as well as the private sector to mitigate flooding issues.

Vice Mayor Pro-Tem Castex-Tatum also agreed that city leaders should look to residents and engage them for input and solutions to Houston’s flooding challenges. She urged residents and businesses to consider the members of Houston City Council as allies in finding solutions.

Vice Mayor Pro-Tem Castex-Tatum established a clean district as a baseline of what the city offers. She said that combating illegal dumping is a priority in her district, District K, which has launched the #CleanStateofMind campaign. She discussed her district’s efforts to curb illegal dumping, including adding regular patrols around 22 chronic dumping spaces.
Council Member Evans-Shabazz discussed city services more broadly, and she urged residents to utilize the 3-1-1 app to report issues in real time to city services.

During Mayor Turner’s inaugural address, he announced plans for an initiative to continue to address Houston’s homeless challenge. During the Future of Texas panel discussion, Houston City Council Members also discussed their priorities for housing and supporting Houston’s homeless.

Council Member Evans-Shabazz focused on the homeless population that has been previously incarcerated. She outlined a priority for compassionate second chances for housing, employment and other supportive services to help Houston’s homeless.

Council Member Thomas said that homelessness goes hand-in-hand with Houston's housing crisis. She said that city leaders need to develop a more comprehensive housing plan to address this issue as well as wraparound services to move people from the streets into permanent housing.

Next Month: Future of Texas

The Future of Texas series, which is a part of our Business Resource Group (BRG), features elected officials shaping our state's future, giving Partnership members the opportunity to engage with these leaders and hear their perspectives on our city and state's most pressing issues. Learn more here.

HOUSTON (September 17, 2020) -Â The Greater Houston PartnershipÂ released theseÂ statements on behalf of its president and CEO, Bob Harvey, with regards to Governor Abbott's expansionÂ of the stateâs reopening plans. More details about the announcement and the modified metrics may be found here. Statements Attributable to Bob Harvey, president and CEO, Greater Houston PartnershipÂ  On Governor Abbottâs announcement We are pleased that Governor Abbott has signaled we are moving forward with reopening a greater portion of the Texas economy. Houstonians have done a great job working together â masking up and maintaining social distancing â to slow the spread of COVID-19 in our community. It is now critical that we get Houstonians back to work and restore our small businesses that have been so severely impacted.Â  However, as we continue to reopen, it is even more critical that we do so safely and sustainably.Â  On importance of maintaining practices to safely reopen the economy Houstonians have shown we can manage COVID-19 in our community by wearing masks, washing our hands and keeping our distance from others. As the economy continues to reopen, it is crucial that we continue these practices to ensure the safety and wellbeing of our families, our employees, and our community.Â  As we increase our activity, we cannot let our guard down. COVID-19 is still prevalent in greater Houston. We must be vigilant and continue practicing the same safety measures that helped us slow the spread of COVID-19 in recent weeks. If we all do our part, we can enjoy a better quality of life this fall.Â  ### Greater Houston Partnership The Greater Houston Partnership works to make Houston one of the best places to live, work and build a business. As the economic development organization for the Houston region, the Partnership champions growth across 12Â counties by bringing together business and civic-minded leaders who are dedicated to the areaâs long-term success. Representing 1,100 member organizations and approximately one-fifth of the regionâs workforce, the Partnership is the place business leaders come together to make an impact. Learn more at Houston.org. CONTACT: Â  Â  Vice President, Communications Â  Â  Â  Â Â  (c) 504-450-3516 |Â amistretta@houston.org Maggie MartinÂ  Senior Manager, Communications Â  Â  Â  Â Â  mmartin@houston.orgÂ
Read More

The Rice Alliance isÂ launching a clean energy accelerator in 2021 atÂ The Ion, the innovation hub in midtown Houston.Â  The new hands-on, 12 week program will supportÂ early-stage energy startups from across the U.S. and around the world.Â Startups will have access to Rice Allianceâs network of energy corporations, energy investors, and energy advisors, and experience curriculum and programming designed to increase their likelihood of success and accelerate their path forward.Â Â  âHouston is our home, and we are strong believers in our city, " saidÂ Brad Burke, Managing Director of the Rice Alliance.Â "It is here that some of the greatest minds in energy are innovating. New technologies, many driven by startup companies, have enabled the US to become energy self-sufficient for the first time in history. But the global energy needs are growing and changing. So we need to apply that same entrepreneurial spirit and technology innovation to meet these challenges for the future.âÂ  The energy accelerator will support, champion, and align with the momentum and efforts happening in Houston to further the energy transition. The Greater Houston Partnership isÂ working alongside the business community, stakeholders, elected officials and others to identify solutions to take on the dual challenge of meeting the worldâs increasing energy needs while lowering the worldâs carbon footprint. Over the last year, the Partnership hasÂ been dedicated to strengthening Houstonâs position by convening key leaders, advocating for sound public policy and attracting innovative companies who share this vision. âHouston truly is the hub of the global energy industry, and it is here where the next generation of energy leaders will create and scale innovations that will change the world,â said Bob Harvey, President and CEO ofÂ the Greater Houston Partnership. âWe are home to major corporate energy R&D centers, corporate venture arms, a range of VC-backed energy startups, and a host of startup development organizations supporting energy technology. Rice Alliance for Technology and Entrepreneurship has long served as a catalyst for positioning Houston as a leading center of technology entrepreneurship. The new Clean Energy Accelerator will build on that legacy and align with the work already taking place in Houstonâs robust energy innovation ecosystem.â This announcement aligns with Rice Allianceâs 20-year anniversary. The globally recognized initiative, within the Jones Graduate School of Business at Rice University, supports entrepreneurship education, technology commercialization, and the launch of technology companies. Since inception, Rice Alliance has connected with more than 2,675 startups that have raised $21.5 billion in funding. With a vibrant community, including more than 52,000 entrepreneurs, investors, and members of the entrepreneurial ecosystem attending over 200 programs hosted by the Rice Alliance, the accelerator is a commitment to expand that impact and continue to support the energy transition.Â  Applications for startups will open in early 2021. Learn more aboutÂ innovation in Houston.Â
Read More

State of the City