8 Mixed-Use Projects Set to Change the Face of Houston 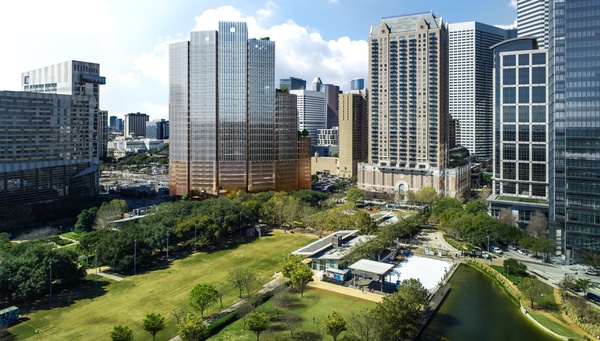 A growing number of new developments across the metro region are incorporating multiple uses—from retail and office to residential and even hotels—in more pedestrian-centric designs. Developers recognize that more residents and workers want to feel connected to the spaces where they’re spending time instead of pulling up directly to a storefront in their car. That’s led to large-scale mixed-use projects, particularly in the urban core. Here are just some of the projects that are helping reshape the look of Houston.

1550 on the Green and Discovery West
Global developer Skanska has assembled a prime three-acre site in Downtown Houston overlooking Discovery Green. The company began construction in summer 2021 on 1550 on the Green, a 370,000-square-foot office tower that includes 7,000 square feet of ground-level retail and restaurant space. It’s the first phase of a master plan for what the company calls the Discovery West district, which will include additional retail, restaurant, and green space, creating a new destination adjacent to the iconic 12-acre park.

East River
East River will feature roughly 1 million square feet of commercial and residential space to be developed by Houston-based Midway in phases over the next 20 years. The first 26-acre phase of the East End project broke ground this year and will feature 360 apartment units, 250,000 square feet of office space and another 110,000 square feet of street-level retail. Amenities will include a golf course, green space, a plaza and access to hike and bike trails along the bayou. The project’s developers and community leaders believe East River will be an economic catalyst for the previously industrial site and the East End neighborhoods that surround it. They also hope it will become a communal gathering place with special events, festivals and other activities for both residents and visitors.

Post Houston
In November, Post Houston opens on the northern edge of downtown with restaurants, an international market, creative workspaces and a 210,000-square-foot rooftop park and garden. Lovett Commercial says future additions to the 550,000-square-foot former post office will include a concert venue and a possible hotel. Post Houston could prove to be a catalyst for additional projects on the northside along Buffalo Bayou, an area that has not experienced the same level of redevelopment activity as other parts of downtown. It could create a synergy with the nearby Theater District and reimagined Bagby Street corridor.

Katy Boardwalk
Aiming to capitalize on the exponential growth of the Katy area, the new Katy Boardwalk District will blend multifamily residential, office space, the community’s first full-service hotel and retail and restaurant space to create a unique entertainment district set on a 90-acre lake. The project is going up on 169 acres just south of I-10 at Kingsland Boulevard, and partners say the first tenants will be announced in early 2022. The yet-unnamed hotel will include a conference center and ballroom with an estimated 304 rooms. Katy Boardwalk will only add to the retail draw of the community that’s already home to Katy Mills outlet mall and Bass Pro Shops.

The Allen
Rising between Downtown and Montrose along Buffalo Bayou, The Allen is a 1.3 million-square-foot project spanning multiple high rises. The development includes a 42-story hotel and condo tower along with a 22-story, 340,000-square-foot office building and a large-scale retail pavilion all set on a landscaped campus. Thompson Hotels, which operates luxury properties in the U.S. and Mexico, will run the 180-room hotel—a first along Buffalo Bayou Park. The whole six-acre project is estimated at $500 million.

Autry Park
Further west along Allen Parkway, Hanover Company’s Autry Park promises to be an “urban village” complete with more than 1,400 residential units, 350,000 square feet of office space and 100,000 square feet of high-end retail—all positioned around a central green space. The 14-acre development is set to open in three phases, with the first phase slated for completion late this year. Along with The Allen, Autry Park is one of several high-density developments materializing west of downtown along Buffalo Bayou that aim to take advantage of the waterway and its linear park.

Midtown Innovation District
Expected to become the epicenter of Houston’s burgeoning innovation ecosystem, Rice University’s Innovation District in Midtown is beginning to take shape. Major construction is now complete on the campus’ primary anchor, The Ion, and tenants including Chevron Technology Ventures and Common Desk have moved in. The 288,000-square-foot facility located on Main Street in Midtown is offering rentable coworking space for startups, as well as office space for corporate partners and more advanced startups. Ground level restaurant spaces will start filling up later this year. However, the bigger picture for the 16-acre district includes residential, retail, office and other uses built out in collaboration with development partners in the years to come. The innovation district has the potential to become a destination for both companies and individuals looking for a dynamic, pedestrian-oriented urban experience.

Skanska Montrose
Following the demolition of an aging retail strip center and a Kroger grocery store near the intersection of Montrose and Westheimer, developer Skanksa has divulged few details about the future project. The sheer possibility for the three-acre site on the southwest corner of this prime intersection makes this a transformative project. The smart money is on a multi-tower, mixed-use concept that’s likely to include residential and plenty of ground-level retail. Office space or even a hotel are also within the realm of possibility considering the size of the opportunity. Real estate watchers say whatever is planned would need to be timed with the inevitable, and long overdue, rebuild of Lower Westheimer.

Learn more about business districts and neighborhoods in the Houston region.

Houston is the Leading Destination for California Residents Headed to Texas

More former California residents are ending up in Harris County than any other part of Texas, according to a new report.Â  Harris County saw 8,408 new arrivals from California in 2019, an analysis of Census data from StorageCafe shows. The vast majority of those relocating residentsâ3,263 to be exactâmoved from Los Angeles County. Itâs unclear whether the dynamics of the pandemic altered that trend or intensified it, but itâs evident that Harris County is an attractive destination for folks looking for options outside the Golden State.Â  Between 2010 and 2019, nearly 690,000 Californians moved to Texas, or roughly 190 moves a day. Cost of living is playing a big part in the decision process. For instance, an average home in Harris County is 57% cheaper than in Los Angeles County. Plus, the local unemployment rate is just 7.4% compared with LA County at 10%.Â  âI think thereâs no question that the main driver is housing prices in California,â said Bill Fulton, Director of the Kinder Institute for Urban Research at Rice University. âWhen housing prices in California go up, so does migration to Texas. When housing prices in California go down, migration to Texas goes down as well.âÂ  California gave up more than 82,000 residents to the Lone Star State in 2019. Here are the top Texas destination counties for former Californians:Â  Harris County â 8,408. Dallas County â 7,923.Â  Travis County â 6,725. Tarrant County â 6,623. Bexar County â 5,340. Collin County â 5,294. Denton County â 4,028. Williamson County â 2,877. El Paso County â 2,521. Bell County â 1,727. San Diego County is the second leading origin city for Californians moving to Texas, the report shows. Many of those residents are choosing Tarrant and Bexar counties.Â  Learn more about Houston area neighborhoods and living in the region.Â  Â
Read More

Perfect Patios for Fall in Houston

When it comes to patios, Houston has many to choose from across the city. As the weather cools down, now is the perfect time to be outside sipping on your favorite cocktail or enjoying some of Houstonâs delicious cuisine. Although the city has countless options to suit just about every taste, we have narrowed down a few of our favorite spots that make Houston a great place for patio season. Of course, with Houstonâs mild winters and pleasant spring season, that prime patio period often gets extended.Â  Lucilleâs Lucilleâs is a locally-owned restaurant in the heart of Houston's Museum District with delicious, fine southern foods. Chef Chris Williams opened the restaurant in 2012 to pay homage to his great-grandmother who was a culinary entrepreneur well ahead of her time. In addition to great food, Lucilleâs also hasÂ a great patio with live music on Thursday evenings and Sunday for brunch. Rainbow Lodge Another great patio destination with live music on Friday evenings is Rainbow Lodge. Known for its succulent wild game and seafood as well as beautiful multi-level deck with views, this is a great spot for any special occasion or date night.Â  Hungryâs Hungryâs CafÃ© is currently celebrating 45 years of service. There Â are reasons this local favorite continues to attract customers: good service, great outdoor seating and delectable food. Visit either one of their locations in Rice Village or Memorial Drive for lunch, dinner or weekend brunch!Â  St. Arnolds St. Arnolds is Texas' Oldest Craft Brewery with an amazing view of the Downtown Houston skyline from the north side. Open seven days a week, their beer garden is a perfect outdoor spot to enjoy a pint and bar bites (with wine and cider options as well). They also have a large screen to watch sporting events â cheers!Â  Boheme Boheme offers a great, secluded patio experience with a full bar and unique menu, which includes their much-loved Bangkok fries topped with smoked pork shoulder, curry mayo and siracha. The large outdoor space isÂ perfect for a casual outing or a first stop on a night out in Montrose. With fire pits and a largely covered portion of the patio, Boheme is an ideal spot for the approaching cooler weather.Â  Brennerâs on the Bayou For an upscale dining experience, visit Brennerâs on the Bayou. This local favorite features breathtaking views of Buffalo Bayou. The deck creates an elegant atmosphere with lush greenery, a waterfall and picturesque gazebo. Come here to enjoy nature, fine dining and specialty cocktails.Â  Casa Nomad New to the scene is Casa Nomad. Escape the hustle and bustle of city life when you visit this restaurant, inspired by the YucatÃ¡n paradise of Tulum. The patio has a tropical vibe with artfully-prepared dishes and tasty cocktails; a perfect getaway, without the long flight. Â  Backstreet Cafe Under the direction of award-winning Executive Chef Hugo Ortego, Backstreet Cafe not only has outstanding food, but a beautiful courtyard patio as well. This charming restaurant is located inside a 30's-era house in River Oaks and has a menu that changes seasonally, ensuring that each visit to Backsreet Cafe is as unique as the city of Houston itself. These are just a few of the countless patios the great city of Houston has to offer. In fact, Houston is home to over 12,000 food service and drinking establishments covering more than 80 categories of cuisine. As you explore, tag us on Instagram: @LiveWorkHOU or use the hashtag #LiveWorkHOU. We would love to see you at the places mentioned above or any other favorite spot to enjoy Houstonâs lovely fall weather! Â  Learn more about living in Houston.Â
Read More

The Houston DiverseCity Summit will inspire action to advance equity and inclusion in the greater Houston region. The Summit offers content for companies and organizations of all sizes with a focus on best practices…