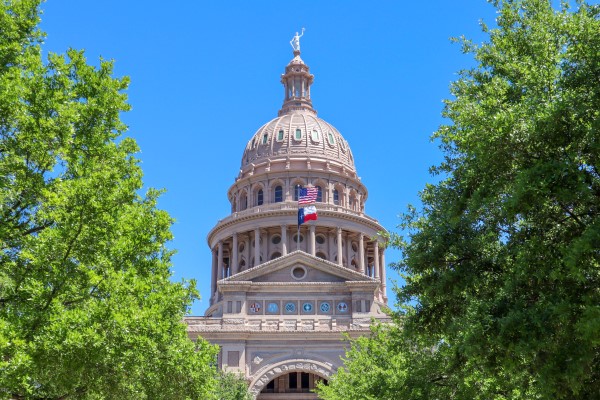 With the end of the 87th Texas Legislative Session, the Partnership produced a summary report on its legislative priorities. This is the first in a series of posts on the issues featured in that summary report focused on energy competitiveness.

To ensure that the Houston region plays a key role in the global energy transition to a more efficient and sustainable, low-carbon future, the Partnership advocated for a series of measures during the legislative session aimed at energy competitiveness. Permitting and regulatory solutions – along with legislation positioning the region to lead the development of carbon capture, use, and storage (CCUS) – were part of this priority strategy.

After six years of negotiations among industry, trade groups, legislators and landowners, legislation passed this session to reform the eminent domain process in Texas. The Partnership supported legislative negotiations providing an equitable eminent domain process that ensure the protection of landowners' constitutional rights and allowed just compensation based on fair market value and the loss of property value. Additionally, the Partnership advocated for expeditious proceedings to protect all parties from unreasonable financial and legal burdens and processes that do not add unreasonable expenses, increased litigation, or changes to long-held judicial principles.

HB 2730 aligns with these principles and ensures the continued development of infrastructure in our state and region necessary to improve quality of life and drive economic growth. This includes roads, railroads, ports, pipelines, power transmission and distribution systems, utility connections, communication networks, and drainage and flood control systems.

The final passage of this important bill improves the eminent domain process in a manner that satisfies affected parties and ensures future investments in critical infrastructure throughout the state and the region can be made with confidence while alleviating bottlenecks to growth.

Carbon Capture, Use and Storage

Advancing energy competitiveness within Texas and our region is a top Partnership priority. Key to those efforts is supporting policies that will help Texas maintain its competitive advantage to lead the global energy transition to a low-carbon future. The use of carbon capture, use and storage (CCUS), is recognized as one of the most significant components of the transition, however, there are some obstacles that need to be overcome to accelerate its implementation in Texas.

In working with stakeholders in the region, the Partnership identified that one of the primary obstacles needing to be addressed this session was the clarification of which state agency has regulatory authority over long-term underground storage of captured carbon, also called geologic sequestration, through injection wells classified as Class VI injection wells.

To date, state regulatory authority over sequestration wells has been split between the Railroad Commission (RRC) and The Texas Commission on Environmental Quality (TCEQ), and primary jurisdiction lies with the Environmental Protection Agency (EPA). With all these agencies to work with, obtaining approval for a Class VI well can be a long and cumbersome process, thus significantly delaying CCUS development and implementation in Texas. The state can seek primary jurisdiction over Class VI wells, known as “primacy,” which would significantly speed up the process, but obtaining primacy from the EPA can take years or may not happen at all if it is not clear which state agency would be the regulating authority.

North Dakota and Wyoming are the only two states that have Class VI primacy, and Louisiana is currently seeking it. To stay competitive, Texas must also start on the path to primacy. HB 1284 does just that by clarifying that the Railroad Commission will have the sole regulatory authority over Class VI injection wells and directs it to seek primacy under this new authority.

The Partnership joined a broad consensus of support among industry and environmental groups to pass this critical piece of legislation. While other obstacles to fully realize all potential applications of CCUS in the state remain, the passage of HB 1284 cleared a pathway to position the region to lead in its development and implementation. The region's massive geologic storage potential, particularly within offshore state-owned lands, enables the region to take advantage of HB 1284 and be a national leader in the development and implementation of Class VI injection sites. This competitive advantage can drive the region's position as a leader in CCUS and in the overall energy transition.

Houston Described as 'Solar Leader' as it Continues Increasing Capacity

A new environmental report ranks Houston No. 16 in the nation for total installed solar photovoltaic (PV) capacity, moving up three spots from its previous ranking. According to the Environment Texas Research and Policy Centerâs report Shining Cities 2022: The Top U.S. Cities for Solar Energy, Houston nearly doubled its solar capacity to 81.4 megawatts between the end of 2019 to the end of 2021.Â  âThe Bayou City once again stands out as a solar leader,â Executive Director of Environment Texas Research and Policy Center Luke Metzger said in a press release. âHoustonâs leadership on solar to date has helped secure a cleaner environment, healthier community and more resilient future.â This month marks two years since the City of Houston released its Climate Action Plan (CAP), a strategy to reduce greenhouse gas emissions, become carbon neutral by 2050, and lead the global energy transition. One of the planâs targets is to produce five million megawatts of solar power per year by 2050. Â In 2021, the City of Houston launched a solar co-op to help homeowners and business owners go solar. âBy setting big goals to grow solar here at home and helping more Texans see the benefits of solar for themselves, we are both setting an example for our peers to follow and ensuring a better future for our community,â Mayor Sylvester Turner said.Â  This year the City of Houston announced the Sunnyside Solar Farm, which will transform a 240-acre former landfill into a solar power farm. Once completed, it will be the largest urban solar farm in the nation built on a landfill, according to the City. The project is expected to remove an estimated 120 million pounds of carbon from the air each year and create jobs. Turner also recently signed a decarbonization policy for city-owned and operated buildings. The City estimates the policy will avoid over 250,000 metric tons of greenhouse gas emissions by 2030. Here are a few other highlights from the report: The U.S. now has 121.4 gigawatts of solar PV capacity, producing enough solar energy to power more than 23 million homes Los Angeles leads the nation in total installed solar PV capacity San Antonio led the South Central region and the state, ranking No. 5 in the nationÂ  Texas produces more wind power than any other U.S. state and more solar power than any state other than California.Â  Last year the Partnership launched a regional energy transition strategy to help Houston lead the global energy transition. The Houston Energy Transition Initiative (HETI) aims to drive sustainable and equitable economic growth in the Greater Houston region through a portfolio of technology, policy, and market initiatives that scale and export solutions for realizing a low-carbon energy world. The strategy also aims to take steps to support solar and wind development by actively attracting and retaining project developers, asset owners and financial traders to Houston. Read more about Houston's Energy Industry and how your company can join in the commitment to leading the global energy transition. Â  Â
Read More