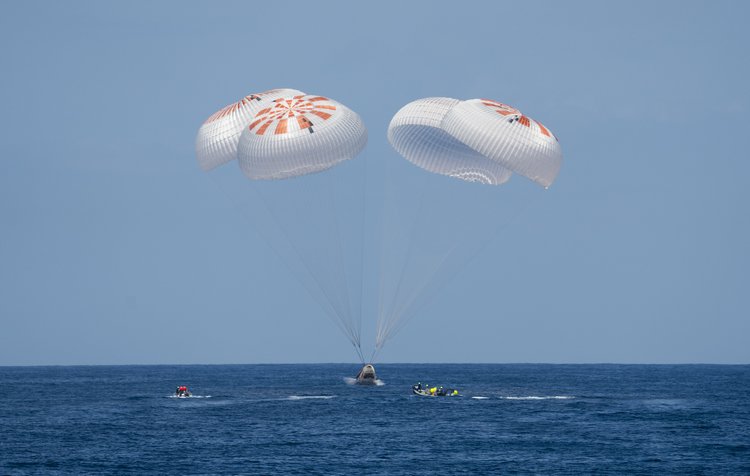 A Houston company is charting new territory in the rapidly evolving commercial aerospace sector after completing a historic mission.

The crew of Axiom Mission 1 splashed down off the coast of Florida on April 25 inside a SpaceX Dragon spacecraft. The return of Axiom Space's crew to Earth concluded the first all-private astronaut mission to the International Space Station (ISS), paving the way for a new era in commercial spaceflight and research.

The 17-day mission 6.3 million-mile mission included 15 days aboard the ISS. A few highlights from the mission according to Axiom include:

“Axiom Space is incredibly proud of this mission and these astronauts, whose training rigor and commitment to a robust research portfolio set the standard for future private spaceflight,” said Michael Suffredini, President and CEO of Axiom Space, which is building its new headquarters at the Houston Spaceport. “The Ax-1 mission is a pathfinder, showing the value of this new method of access to orbit and progress toward Axiom Station, a next generation platform in which the benefits and products of life, work and research in space will be available to a greater number of people.”

Ax-1 is the first of several planned Axiom missions to the ISS and is an important step for Axiom Station, the first commercial space station that will serve as a global academic and commercial hub. The station will be constructed in Houston.

Axiom is a major player in Houston’s bid to regain prominence in the aerospace sector. The creation of the Houston Spaceport at Ellington Airport is galvanizing activity and creating synergies between private companies, NASA and researchers.

NASA has selected two aerospace companies with a Houston presence to move forward in developing next-generation spacesuits and spacewalk systems.Â The announcement is the latest in a series of high-profile developments that are reigniting Houston's aerospace industry. Axiom Space, which recently broke ground on its headquarters at Houston Spaceport, and Collins Aerospace, which is building a manufacturing facility and startup incubator at Houston Spaceport, will compete for task orders under the Exploration Extravehicular Activity Services (xEVAS) contract. The contract has a maximum potential value of $3.5 billion through 2034. Â  âWith these awards, NASA and our partners will develop advanced, reliable spacesuits that allow humans to explore the cosmos unlike ever before,â said Vanessa Wyche, NASAâs Johnson Space Center Director. âBy partnering with industry, we are efficiently advancing the necessary technology to keep Americans on a path of successful discovery on the International Space Station and as we set our sights on exploring the lunar surface.â The spacesuits will be for the International Space Station crew, astronauts on Artemis missions and future human missions to Mars. According to a company press release, Collins Aerospace says its new suits, designed by astronauts, are lighter and more adaptable, allowing for increased mission times. âCollins was there when the first man walked on the moon, and weâll be there when humankind goes back,â said Phil Jasper, president of Mission Systems for Collins Aerospace. Axiom Space will design its spacesuits to provide increased flexibility and specialized tools for exploration and scientific needs, according to the company. âWe are immensely pleased that NASA recognizes the value Axiom Space is providing across a range of human spaceflight activities, from our recent private astronaut mission to the ISS to the design and development of Axiom Station, and now to providing this critical system and associated services for astronauts in LEO [low Earth Orbit] and beyond,â said Michael Suffredini, Axiom Spaceâs President and CEO.Â  Houston Spaceport is located 20 miles south of Downtown Houston at Ellington Airport and describes itself as the worldâs first truly urban commercial spaceport. The Houston Airport System is building the spaceport in phases collaborating with private sector tenants. Houston is home to 500 companies and institutions involved in aircraft or space vehicle manufacturing, research and technology, making the city an ideal site for aerospace and aviation companies to build or expand operations.Â  Learn more about Houston's aerospace and aviation industry.
Read More

While Houstonâs wide-ranging scientific innovations date back to mid-20th century, a discovery in 1985 by two local professors laid the foundation for research and innovation in materials science, electronics and nanotechnology. Dr. Richard Smalley and Dr. Robert Curl of Rice University, and Dr. Harold Kroto of Sussex University won a Nobel Prize in chemistry for discovering a new carbon molecule, buckminsterfullerene. Company Innovating Nanotechnology to Focus on Green-Scaling Houston-based DexMat Inc. is one of various local companies that has emerged from the cityâs scientific advancements in the nanotechnology space, positioning it as one of Houstonâs top manufacturers of products deriving from carbon nanotubes (CNT). From tape to insulated yarn, DexMatâs patented material âGalvorn CNT fibersâ has demonstrated breakthrough advancements in materials science. The Galvorn CNT fibers can be used to create various conductive products and have been recognized by NASA, the U.S. Air Force, and the National Science Foundation, among other elite entities in the scientific community.Â  The CEO of DexMat, Dmitri Tsentalovich, states that although the product is successful, it has not yet reached the maximum performance of its molecular build-up. âOn average, weâve been improving the electrical and mechanical properties by about 20-25% a year for the last 20 years,â Tsentalovich said. The cadence of product improvements allows the company to continue growing and innovating new products.Â  Tsentalovich said he sees Houstonâs position as a hydrogen hub as a major opportunity to scale CNT products without generating greenhouse emissions. âYou can make them [CNT] with net-zero greenhouse gas emissions while at the same time producing hydrogen.â He also noted the cityâs existing infrastructure of energy focused companies creates opportunities for possible adaptations of natural gas emissions to synthesize CNT. Staggering Textile Applications While the productsâ conductivity and strength allow for implementation in large technologies, its malleable properties have opened the door for next-gen projects and research.Â  Sofia Izaguirre, a materials engineer at DexMat, said their productâs flexible characteristics have led to opportunities in the wearable technology space. âThe yarn can be sown into a garment, and essentially turn a shirt into a smart shirt [by] connecting it to a hardware,â she said.Â  Izaguirre said they have partnered with e-textile expert company Hexoskin to explore replacing their current electrodes with Galvorn CNT yarn electrodes. The proposal would improve the products by using more conductible electrodes, according to Izaguirre. She said the CNT electrodes would increase the conductivity with skin by eliminating the need for ECG/ultrasound gel used to decrease skin resistance. The materials engineer emphasized the Galvorn CNT material would improve the contact with skin simply by sowing the fabric with it. âYou can sow a shirt with CNT yarn and [have it] act as an electrode (conductor) as it makes contact with the skin,â Izaguirre said.Â  The Welch Institute for Next-Gen Material Manufacturing In September 2020, Rice University announced a $100 million dollar gift from the Robert A. Welch Foundation to establish The Welch Institute. âThe goal of The Welch Institute is to attract top researchers from around the world to collaborate with Rice University's internationally renowned faculty and scientific resources, making the Institute a center of intellectual discovery, innovation and transformation in advanced material,â according to a press release.Â  Estimated to open in 2023, the new institute will join University of Houstonâs Center for Advanced Materials as two of the cityâs academic spaces dedicated to materials research & development. With many companies eyeing Houstonâs scientific industries, itâs clear a growth for nanotechnology will continue incrementing, following the cityâs culture of discovery and innovation.Â  Learn more about Houstonâs energy industries and why itâs set to become the Energy Transition Capital of the World.Â
Read More