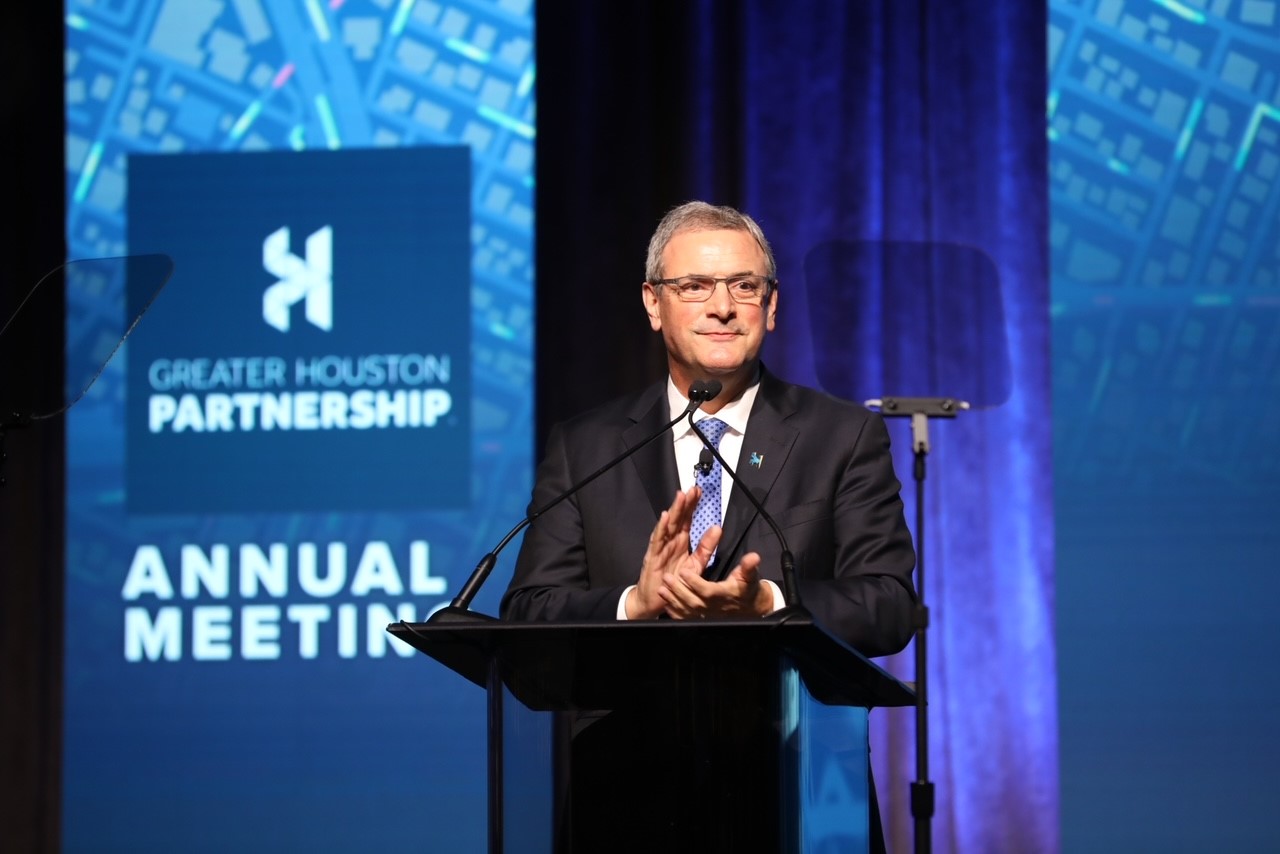 I want to start by thanking Amy again for her leadership over the last year and for her remarks earlier in the program.

It was quite a year, what with the Legislature in session for 240 days.

But you could tell from Amy’s comments that Houston has been on quite a roll – particularly as it relates to innovation and technology, which are the keys to a great future.

But let me zoom out a bit.

Many of us here today recognize that over the last several decades, a remarkable transformation has taken place here in Houston.

The Houston I grew up in – back in that other century – could be characterized as a largely biracial, highly segregated, Southern industrial city, with most of that industry tied to oil and gas and far fewer cultural experiences or attractions.

Frankly, there wasn’t a lot going on here beyond work.

Much of what we associate with Houston today, like the medical center, didn’t develop until after the second world war -- we didn’t even get our first professional sports team until 1960, and even that was in the upstart American Football League.

The Houston of today is the nation’s fourth largest city—a remarkably diverse, vibrant metro filled with talented people drawn to Houston from almost everywhere—with a dynamic quality of life brimming with things to do, and a wide variety of growing industries.

We truly have become one of the world’s great global cities, and we are viewed as such by people all around the world.

Despite the fact we are approaching the two-year mark of a global pandemic, Houston is in a strong position to lead.

I won’t repeat everything Amy said earlier, but goodness – The Ion, Greentown Labs, Hewlett Packard Enterprise, NRG's Headquarters. The incredible development happening out in communities like The Woodlands, Katy, Sugar Land, and Pearland.

And as Amy noted, Houston is becoming a hub for startups, building off our core industries to foster new companies focused on solving the problems that matter.

So, these are really good days for Houston.

We’ve got momentum and so much opportunity ahead of us! We just have to play our cards right.

Amy mentioned the Houston Energy Transition Initiative. I think this may be the single most important issue relative to Houston’s long-term success that we have faced or will face in our lifetimes. We are the undisputed Energy Capital of the World, but we know the industry is changing very rapidly.

Fortunately, Houston has the talent, physical infrastructure, innovation ecosystem and all the other ingredients to lead the global transition to a low-carbon future.

I am so pleased that Houston’s top energy, academic, and civic leaders are committed to this effort, invested in our energy transition strategy and actively engaged in moving the industry and Houston forward.

I am also excited about the work the Texas Medical Center has been doing with the TMC Innovation Institute and now TMC3.

Combine that with the growth of the individual TMC member institutions, the large new A&M presence in the TMC, plus the 52-acre Hines development just east of the Medical Center, and you have the makings of a burgeoning life science sector in Houston.

I could go on in this vein – but I won’t. You all know that Houston is on a roll. But I will tell you this, we can’t take Houston’s success for granted.

When people ask me what the Greater Houston Partnership is about, I tell them “it’s simple, really -- We are about growth and opportunity.”

Growth of the Houston region and opportunity for all Houstonians.

And when we say all Houstonians, we mean just that.

Our role is to harness the collective commitment and resources of the Houston business community to strengthen Houston as the most diverse, inclusive, and equitable city in the country.

This starts with our public and higher education systems, and extends to corporate hiring and procurement practices, up to and including executive leadership roles and board composition.

I am pleased with the early work of our One Houston Together initiative, but it’s clear we’ve got a long way to go.

Yet, we know good things don’t just happen.  Someone must take the lead.

I am pleased to say that today, the Partnership board, our members and our staff – and all of you in this room – are united in working together to move Houston forward.

We have never been more focused on growth and opportunity than we are now, and I ask each of you to think about how you can help.

For example, be vocal in your support of programs and projects we need to move Houston forward, such as public education reform, our flood mitigation investments and the I-45 improvements from downtown to the beltway.

Please don’t simply assume others will champion them or that they will simply happen on their own.

And support elected officials who unite behind our message of growth and opportunity – political leaders who help bridge the gaps, iron out the differences, and forge the solutions that allow us to move forward.

We have shown ourselves to be a city that works together, across neighborhoods, income, race, and ethnic lines, to create a better future for everyone.

So, again, we at the Partnership are for growth and opportunity, united with you in our effort to move Houston forward. We welcome anyone who is prepared to work alongside us to make great things happen in Houston.

Rise to the Top: Melanie Johnson of Collaborative for Children

In this episode of the Partnership's Rise to the Top podcast, we talk with Dr. Melanie Johnson, President and CEO of Collaborative for Children.  Host and Partnership Chief Development Officer Katie Pryor chats with Melanie about the organization's work to provide relevant early educational opportunity to Houston's children. The two also discuss Melanie's experience helping lead several local institutions and her passion for education. Other topics include effective mentorship and prioritizing career and family. We also learn about some of the Houston places and experiences that are special to  this extraordinary professional.  Launched in 2021, the Greater Houston Partnership's Rise to the Top podcast aims to amplify the insight of accomplished female leaders in the Houston region.  Apple Podcasts linkSpotify link
Read More

The Greater Houston Partnership celebrates our members making important announcements and sharing news about their operations and impact in our community. Learn more about some of those announcements over the last month below.  Houston-based global real estate company Hines announced a new commitment this month to achieving net-zero carbon emissions across its worldwide portfolio of more than 1,500 buildings. The company, which operates millions of square feet of commercial space in metro Houston, aims to realize net-zero by 2040. It’s estimated that buildings account for roughly 31% of global carbon emissions, making real estate one of the biggest areas of focus in combatting climate change.  One of the metro region’s four-year universities recently announced it will begin guaranteeing admission to students graduating from certain community colleges in Texas. Houston Baptist University said it has inked agreements with a number of colleges, including four in the area: Houston Community College, Alvin Community College, Lone Star College and Wharton Junior College. Graduates who submit a transcript showing they earned a degree and finished with a cumulative GPA of 2.0 or higher are eligible for HBU’s guaranteed admission.   IT software provider Liongard has raised $10 million in a new round of funding that will help fund expanded customer service. According to InnovationMap, Liongard has roughly 2,000 partners in support of more than 60,000 end customers for its MSP software services.  Two local institutions are combining their research efforts in the battle against leukemia. Rice University and MD Anderson researchers believe they’ve identified a combination of drugs that, when used together, can help knock out leukemia cells.  just discovered a potential one-two punch that could, they hope, knock out an insidious disease. According to a newly published study, teams from Rice and MD Anderson screened roughly 45,000 different compounds to identify which ones are the most lethal to leukemia cells. Though the research shows promise through a number of combinations, researchers say much more work is needed before a new treatment becomes clinically available.  The Ion is taking a giant leap in innovation by partnering with NASA’s Johnson Space Center to launch a “technology transfer center” at the Ion to bolster the Houston-Galveston region’s aerospace innovation ecosystem. According to a release, the private-public partnership will include events, programming and initiatives to develop new technologies for the commercial and private space industries and “accelerate tomorrow’s space endeavors” by giving entrepreneurs access to NASA’s IP portfolio. A subsidiary of the energy firm Sempra has signed an agreement with ConocoPhillips to develop Sempra’s Port Arthur LNG project and collaborate on other related energy infrastructure in Southeast Texas and the Pacific Coast of Mexico. The agreement between ConocoPhillips and Sempra Infrastructure lays the groundwork for a 20-year LNG collaboration at the Port Arthur facility now under construction. The agreement also calls for cooperation between the two companies on carbon-sequestration and low-carbon hydrogen across multiple projects.  Accounting firm Weaver has a new headquarters in the Uptown area. The firm relocated from Greenway Plaza to a 60,000-square-foot space at Five Post Oak Park near the intersection of San Felipe and the 610 Loop. Weaver officials said in an announcement that the new headquarters space is intended to increase the firm’s visibility and increase flexibility in the new hybrid environment.    If you are a member and want us to help communicate news about your organization, please send a press release or information about the announcement to member.engagement@houston.org and we will share it with our content team for possible inclusion in an upcoming roundup. Learn more about Partnership membership.
Read More

Join the Greater Houston Partnership for the 3rd series in our Why Houston Webinar series, featuring Regional Allies.  The greater Houston region is one of the most attractive destinations to…