Houston firmly retains its spot as the fourth largest city in the nation with 2.3 million residents, according to population estimates released May 23 by the U.S. Census Bureau. The City of Houston increased its population by 8,057 residents to 2,325,502.

The top 20 most populous cities in the nation remained relatively the same as last year, with some shifting along the bottom. New York, Los Angeles, and Chicago remain the first, second and third most populous, respectively. Fort Worth rose two spots from 15th in 2017 to 13th in 2018, adding 19,500 residents in the past year, a 2.2 percent growth rate, the fastest among large cities. Other Texas cities in the top 20 include San Antonio as seventh, Dallas as ninth and Austin as 11th. 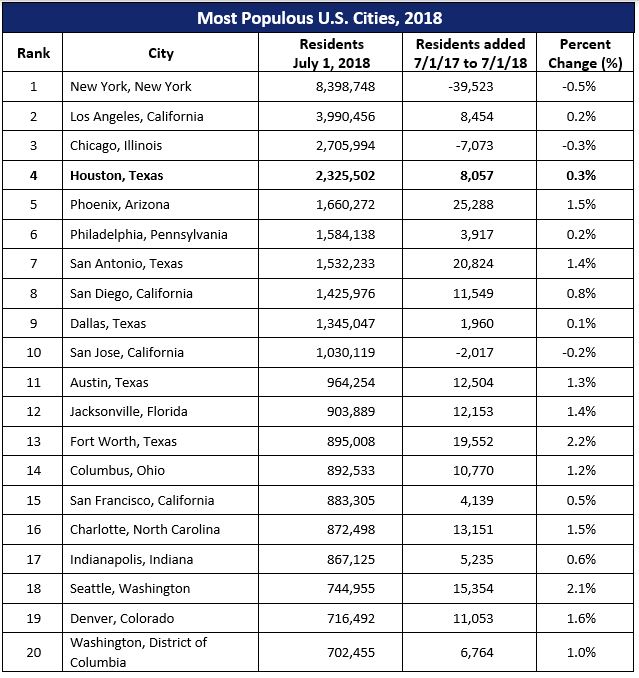 Despite the city’s recent slow-down in population growth, Houston still holds the top spot for the largest increase in population between 2010 and 2018, adding nearly 232,000 people. 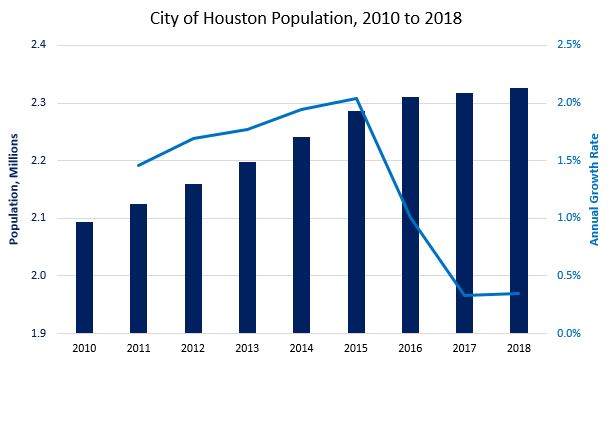 In this episode of Bayou Business Download, we talk about the latest figures from the U.S. Census and what they tell us about the region's growth in the middle of the pandemic. We're joined by Partnership Senior Vice President of Research Patrick Jankowski. In this episode we cover:Â  The changes in metro Houston's population between July 2020 and July 2021 How those changes compare with the nation's other major metrosÂ  What the local figures tell us about where the region is growing fastest and where it's losing populationÂ  What the long-term trajectory looks like for metro Houston's population Â  Bayou Business Download is presented exclusively by:Â  Â  Â  Â  Â  Â  Â  Visit Website
Read More

Houston was one of only a few major metros in the U.S. to see its population grow during the worst period of the COVID-19 pandemic, according to newly released Census figures.Â  The nine-county Houston metro area added 69,094 new residents between July 2020 and July 2021. That took the regionâs population to 7,206,841, up from 7,137,747. While a few other major metros such as Dallas, Phoenix and Atlanta also experienced gains, most including Los Angeles, New York, Chicago, Miami and Washington D.C. saw population declines.Â  According to the Census Bureau: âIn 2021, fewer births, an aging population and increased mortality - intensified by the COVID-19 pandemic - contributed to a rise in natural [population] decrease across the country, but particular hitting big cities the hardest.â Hereâs a breakdown of how the 12-month period affected some of the largest U.S. metros:Â  Dallas: +97,000 Phoenix: +78,220 Houston: +69,094 Austin: +53,300 Atlanta: +42,000 Miami: -38,990 San Francisco: -55,000 Los Angeles: -91,000 Chicago: -91,000 New York City: -328,000 Learn more about the demographics of the area in Houston Facts and get information about living in Houston.Â  Â
Read More