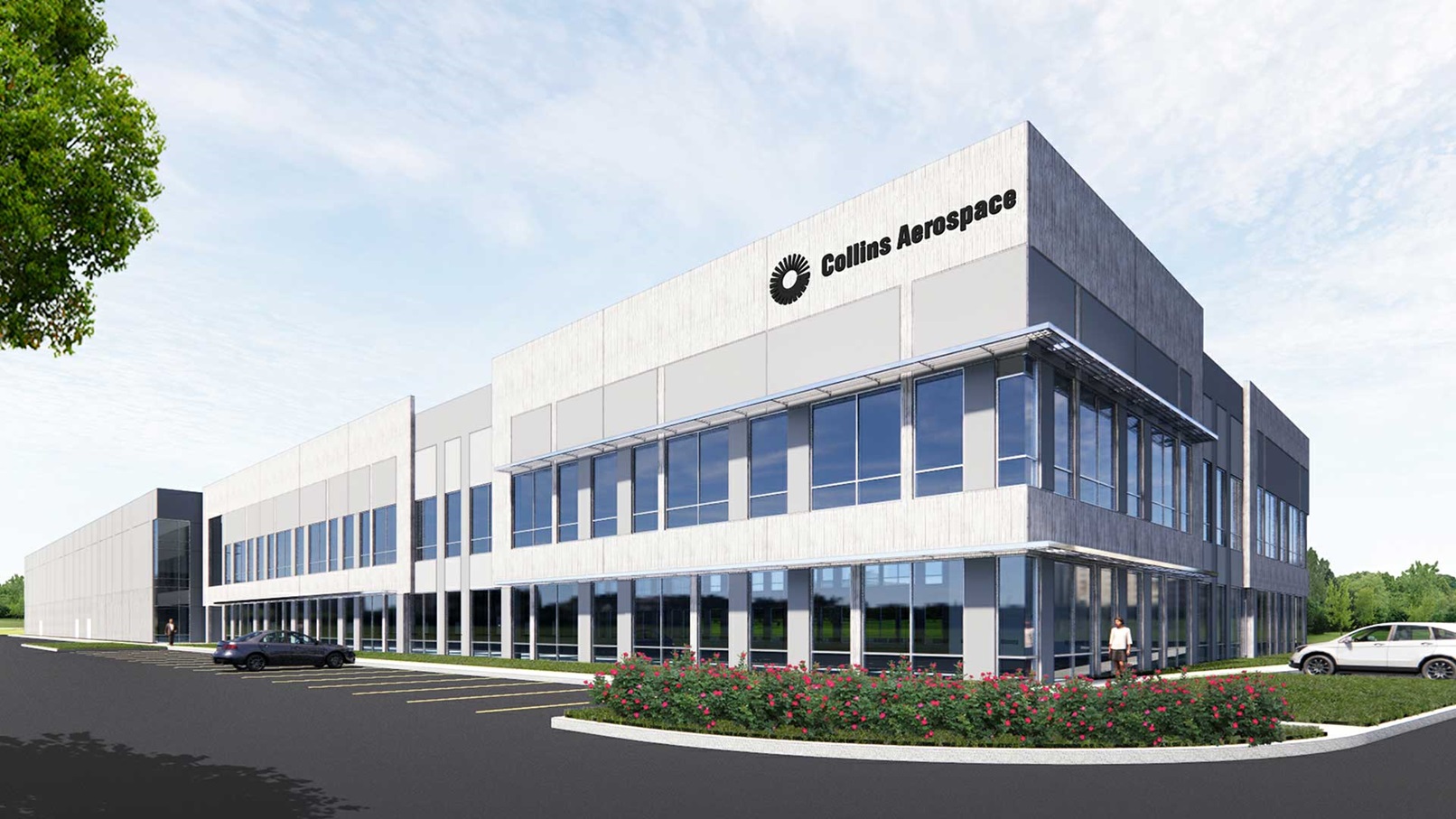 Houston Spaceport is getting a new tenant that will host Houston’s first spaceflight incubator.

Collins Aerospace, a unit of Raytheon Technologies, said it will occupy an eight-acre, 120,000-square-foot campus that will support spaceflight and house the incubator. The Houston Chronicle reports the project will break ground in June, with construction slated to wrap up by the end of next year.

The new campus will continue to be part of the company’s Mission Systems business, one of six strategic business units of Collins Aerospace. The 10,000 square-foot spaceflight incubator will create space for startups and universities to collaborate on solving critical space technology challenges, including robotics, medicine and additive manufacturing.

Houston Spaceport at Ellington Airport is one of only a handful of commercially licensed spaceports around the country. The facility, located 20 miles south of Downtown Houston, is being built out in multiple phases by the Houston Airport System in collaboration with private sector tenants. Its proximity to NASA Johnson Space Center is a draw for many companies looking to work with, and build off of, NASA technology.

“On behalf of Collins Aerospace, I would like to thank the City of Houston, Houston Airports and Bay Area Houston Economic Partnership for creating a robust business climate and for their strong support of this important expansion of our business,” said Phil Jasper, President of Collins Aerospace’s Mission Systems business unit. “Building on our 40 years in the Houston community, this expansion will further strengthen collaboration with our customer to support spaceflight.”

As an anchor tenant of Houston Spaceport, Collins Aerospace will receive up to $25.6 million in financing from Houston Airports for capital improvements. The amount financed will be reimbursed by Collins Aerospace. Collins Aerospace currently has a facility in Houston, which is at capacity, that develops and produces systems for NASA’s human-manned space flight programs.

“Collins Aerospace’s new campus is yet another game-changer for Houston as we position our region as one of the country’s leading next-generation tech and aerospace hubs,” said Houston Mayor Sylvester Turner. “We are leveraging Houston’s many advantages, including our dynamic workforce, to fuel the future of aerospace— a potentially trillion-dollar, 21st-century commercial space economy.”

Bay Area Houston Economic Partnership President Bob Mitchell said his organization has worked very closely with the aerospace community in Houston over the last four decades to help the industry cluster continue to be successful. “The work Collins Aerospace has brought to Houston for nearly 40 years has provided valuable aerospace career opportunities for Houstonians,” he added.

This is the second major announcement for the Houston Spaceport in recent months. In December, Axiom Space announced plans to build a 14-acre headquarters campus there to develop its Axiom Station, the world’s first free-flying, private space station. That project is expected to bring more than 1,000 jobs to Spaceport and will include a 322,000-square-foot facility to accommodate Axiom Station modules as well as terminal space to house private astronauts, operations, engineering and related activities.

The Ion is taking a giant leap in innovation by partnering with NASA’s Johnson Space Center to launch a “technology transfer center” at the Ion to bolster the Houston-Galveston region’s aerospace innovation ecosystem.  According to a release, the private-public partnership will include events, programming and initiatives to develop new technologies for the commercial and private space industries and “accelerate tomorrow’s space endeavors” by giving entrepreneurs access to NASA’s IP portfolio. “This partnership will allow us to increase startups through our aerospace accelerator targeting minority businesses and help achieve NASA’s goals to enhance scientific and technological knowledge to benefit all of humankind, as we propel commercialization of space and work to land the first woman and first person of color on the Moon under Artemis,” said Vanessa Wyche, director of NASA’s Johnson Space Center. Houston has a large pool of aerospace talent and expertise with more than 23,000 professionals. The Houston Spaceport also positions the region as a leader in the emerging commercial space flight sector. In 2021, the Ion launched the Aerospace Innovation Accelerator for Minority Business Enterprises, which develops businesses tackling aerospace-related challenges with the support of NASA and DivInc. “Together our Ion community of startups, entrepreneurs and academic institutions, across industries and disciplines – from health care to sports, to ecommerce to resiliency – is the perfect place for human performance and for NASA to derive talent. Just as NASA is the perfect team to inspire our Ion community to reach for the stars. Together we will safeguard Houston’s title as ‘Space City’ and advance the global space industry for future missions,” said Jan E. Odegard, Executive Director of the Ion. The new collaboration is yet another example of recent prominent announcements underscoring the momentum in Houston’s aerospace industry.
Read More

NASA has selected two aerospace companies with a Houston presence to move forward in developing next-generation spacesuits and spacewalk systems. The announcement is the latest in a series of high-profile developments that are reigniting Houston's aerospace industry. Axiom Space, which recently broke ground on its headquarters at Houston Spaceport, and Collins Aerospace, which is building a manufacturing facility and startup incubator at Houston Spaceport, will compete for task orders under the Exploration Extravehicular Activity Services (xEVAS) contract. The contract has a maximum potential value of $3.5 billion through 2034.   “With these awards, NASA and our partners will develop advanced, reliable spacesuits that allow humans to explore the cosmos unlike ever before,” said Vanessa Wyche, NASA’s Johnson Space Center Director. “By partnering with industry, we are efficiently advancing the necessary technology to keep Americans on a path of successful discovery on the International Space Station and as we set our sights on exploring the lunar surface.” The spacesuits will be for the International Space Station crew, astronauts on Artemis missions and future human missions to Mars. According to a company press release, Collins Aerospace says its new suits, designed by astronauts, are lighter and more adaptable, allowing for increased mission times. “Collins was there when the first man walked on the moon, and we’ll be there when humankind goes back,” said Phil Jasper, president of Mission Systems for Collins Aerospace. Axiom Space will design its spacesuits to provide increased flexibility and specialized tools for exploration and scientific needs, according to the company. “We are immensely pleased that NASA recognizes the value Axiom Space is providing across a range of human spaceflight activities, from our recent private astronaut mission to the ISS to the design and development of Axiom Station, and now to providing this critical system and associated services for astronauts in LEO [low Earth Orbit] and beyond,” said Michael Suffredini, Axiom Space’s President and CEO.  Houston Spaceport is located 20 miles south of Downtown Houston at Ellington Airport and describes itself as the world’s first truly urban commercial spaceport. The Houston Airport System is building the spaceport in phases collaborating with private sector tenants. Houston is home to 500 companies and institutions involved in aircraft or space vehicle manufacturing, research and technology, making the city an ideal site for aerospace and aviation companies to build or expand operations.  Learn more about Houston's aerospace and aviation industry.
Read More