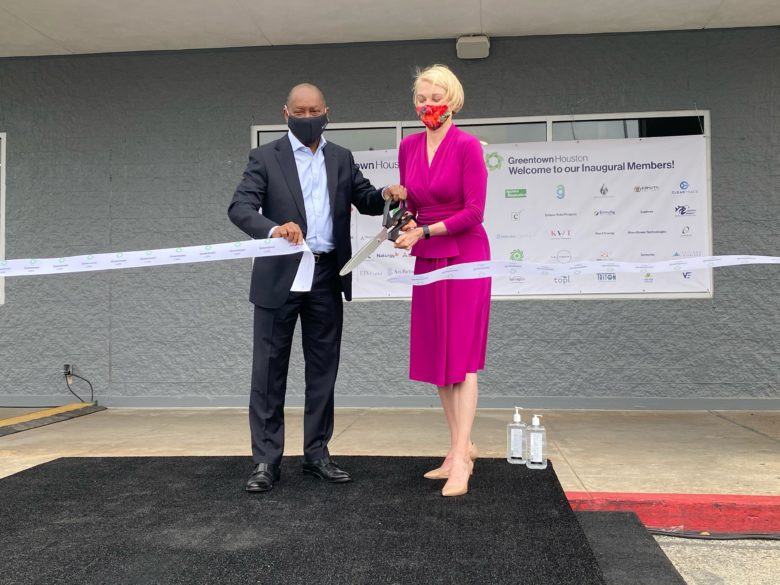 With more than 130 affiliated startups employing more than 1,400 workers in carbon reducing technologies, Greentown is considered one of the top energy-focused incubators in the world. Houston is its first expansion outside of Massachusetts. A cohort of 27 startups will take up residence in the new building this spring.

The Greentown debut comes as energy tech companies ride a wave of growth in Houston. Venture capital funding in cleantech, climate tech and digital oil & gas totaled $251 million over the last three years, up from $38 million during the previous three-year period, according to PitchBook. There are now 13 energy tech startups valued over $20 million in Houston. The highest valuation belongs to bio-chemical manufacturer Solugen, worth over $250 million.

The pandemic, social influence and other factors appear to be accelerating the energy transition to a low-carbon future. Companies large and small as well as governments around the world are preparing for the change, and Houston is no exception. The acknowledged energy capital of the world is now working to position itself as the energy transition capital of the world.Â  Later this month, the Partnership will co-host The Future of Global Energy, presented by Chevron, a three-day conference in collaboration with the Center for Houstonâs Future. On day one, the Partnership will reveal a blueprint for how Houston can guide the global energy transitionâleveraging its knowledge and infrastructure. Other sessions will feature discussions on how to bolster carbon capture use and storage (CCUS) and hydrogen technologies in the region.Â  The Houston region is already attracting significant activity in the energy transition and energy 2.0 spaces. Following announcements from Greentown Labs and other players last year, momentum is ramping up in 2021. Here are a few projects weâre watching. In February, Halliburton Labs announced the inaugural cohort of companies for its program that makes the oil field services giantâs labs, technical expertise and business network available to early-stage energy 2.0 companies. The goal is to help the companies prepare to commercialize and scale their technology. The initial cohort includes Nanotech Inc., Enexor BioEnergy, Momentum Technologies and OCO Inc.Â  Media reports in March described a new 100-megawatt energy storage project being built in Angleton, about 40 miles south of Downtown Houston. The project is registered to Gambit Energy Storage LLC, which is reportedly a subsidiary of Tesla. Battery storage initiatives are picking up across Texas and elsewhere around the country as companies work to increase the efficiency and capacity of large-scale power storage. The Angleton project could be enough to power 20,000 homes during the peak of summer.Â  Click to expand Rendering of ExxonMobil Houston Ship Channel project In April, ExxonMobil revealed a $100 billion proposal to create an innovation zone along the Houston Ship Channel that would capture carbon emissions from petrochemical, manufacturing and other plants. Those emissions would then be transported and stored in natural geologic formations on the sea floor of the Gulf of Mexico. Initial projections from the company estimate the project could capture and store about 50 million metric tons of CO2 a year by 2030. The project would require funding from both industry and government and is still in the feasibility stage.Â  Danish power company Ãrsted is building Old 300, a 1.1-gigawatt solar PV, in Fort Bend County. The Old 300 Solar Center will cover an area of 2,800 acres and use approximately 1 million bifacial modules. The company said Old 300 will create a dependable source of income for the ranches that lease their land for the project. "With its location close to Houston, Old 300 will further diversify our onshore footprint into a premium market with strong long-term fundamentals." said Vishal Kapadia, chief commercial officer for onshore with Ãrsted. "We're excited to add another large-scale, attractively contracted solar project to our portfolio. Solar is the fastest-growing power generation technology in the world and will continue to play a key role in our growth going forward." Houston bio-manufacturing company Solugen is working on a project to create a new bio-based manufacturing process for a specialty chemical. The zero-carbon process for creating glucaric acid, which is a useful anti-corrosive agent, could represent a lucrative new product line for Solugen and set a roadmap for other low-carbon or no-carbon chemical manufacturing. Â  Cemvita Factory, a Houston-based startup that uses biotech to convert carbon dioxide emissions into a variety of useful chemicals, is plotting an expansion. The company said in May that it would more than triple its current headcount of 30 as it scales up to meet growing demand for services. Cemvita Factory uses synthetic biological processes to genetically alter microorganisms to absorb carbon dioxide and other molecules as feedstock. The altered microbes can then be turned into a variety of chemicals for industrial use, such as ethylene, which can be used to make plastics.Â  These are just a handful of the Energy 2.0 projects happening across the Houston region. To learn more about the role such companies will play in the energy transition and how Houston is positioned to lead the effort, register today for The Future of Global Energy, presented by Chevron.Â  Â
Read More

Bolstered by the recent headquarters relocations of Hewlett Packard Enterprise and NRG Energy, Houston now has the third largest concentration of Fortune 500 companies in the nation, according to the publicationâs latest report. Twenty-four companies headquartered in the Houston metro area are ranked on the 2021 Fortune 500 list. Houston is now behind only New York with 64 Fortune 500 firms and Chicago with 35. Dallas ranks fourth with 22 companies.Â  Houston added four companies to its Fortune 500 roster this year: Academy Sports & Outdoors, Hewlett Packard Enterprise, KBR (moved from No. 501 to No. 470), and NRG Energy. Academy Sports & Outdoors went public in October 2020 and is new to the Fortune ranking. Hewlett Packard Enterprise announced in November that it would relocate its headquarters to Houston and NRG made a similar announcement in May 2021.Â  Last year, there were 22 Houston area companies on the Fortune 500 list. The biggestÂ movers from 2020 to 2021 are KBR (up to No. 470 from No. 501), Crown Castle International (up to No. 467 from No. 496), and Waste Management (up to No. 202 from No. 207).Â  âWe often talk about Houston as Americaâs Headquarters City due to the large number of national and international companies that call our region home. This latest Fortune 500 list is just further evidence that Houston remains a draw for a diverse mix of companies looking for skilled corporate talent in a central geographic location with a low cost of doing business. The Houston economic development story is a strong one and we will continue to build on it via our target industries in the years to come.âÂ  The region also had two companies come of the annual list. Apache, now known as APA, went from No. 465 to No. 595. Calpine (No. 319 in 2020) was acquired by a private consortium and is no longer publicly-traded.Â  The Fortune 500 list is one barometer of a regionâs business activity and overall economic health. Despite the challenges posed by the pandemic over the last year, the Houston region has continued to draw new business and investment. The Partnership and its regional allies assisted in 21 economic development projects in 2020, accounting for over $704 million in capital expenditure and over 3,200 new jobs to the region. Â  Learn what makes Houston an attractive place for headquarters and see the full Fortune 500 list.Â  Â
Read More

The Future of Global Energy: Houston's Role in Leading the Energy Transition Presented by Chevron

Houston has long been recognized as the Energy Capital of the World. To maintain that standing and realize sustained economic growth, the region must play a lead role in driving the global energy transition to a low-…