The Gulf Coast Labor Market Is Making a Turn After Record-Breaking, ‘Astonishing’ Unemployment

Key indicators are showing a change in Houston’s labor market, according to a regional labor economist.

Job postings are starting to increase in some industries while the number of weekly unemployment insurance claims are decreasing, leading Parker Harvey, principal economist for the Gulf Coast Workforce Board, to believe that the region has “probably, tentatively, turned the corner in a very, very modest way.”

Harvey has seen job postings pick up in the areas of leisure/hospitality, which includes bars, restaurants, hotels and retail; construction; transportation; warehousing and logistics.

“You’re finally starting to see increased posting of job ads compared to a few weeks earlier, which makes sense given the phased reopening of businesses since early May,” he said.

Weekly unemployment insurance claims in the 13-county Gulf Coast region have decreased 60% from April, when they apexed at 76,999 claims.

Near the end of May, they had declined to about 30,202 claims – still about eight times the 4,868 claims filed in the beginning of March, before the COVID-19 pandemic prompted business closures – but showing movement in the right direction, Harvey said. 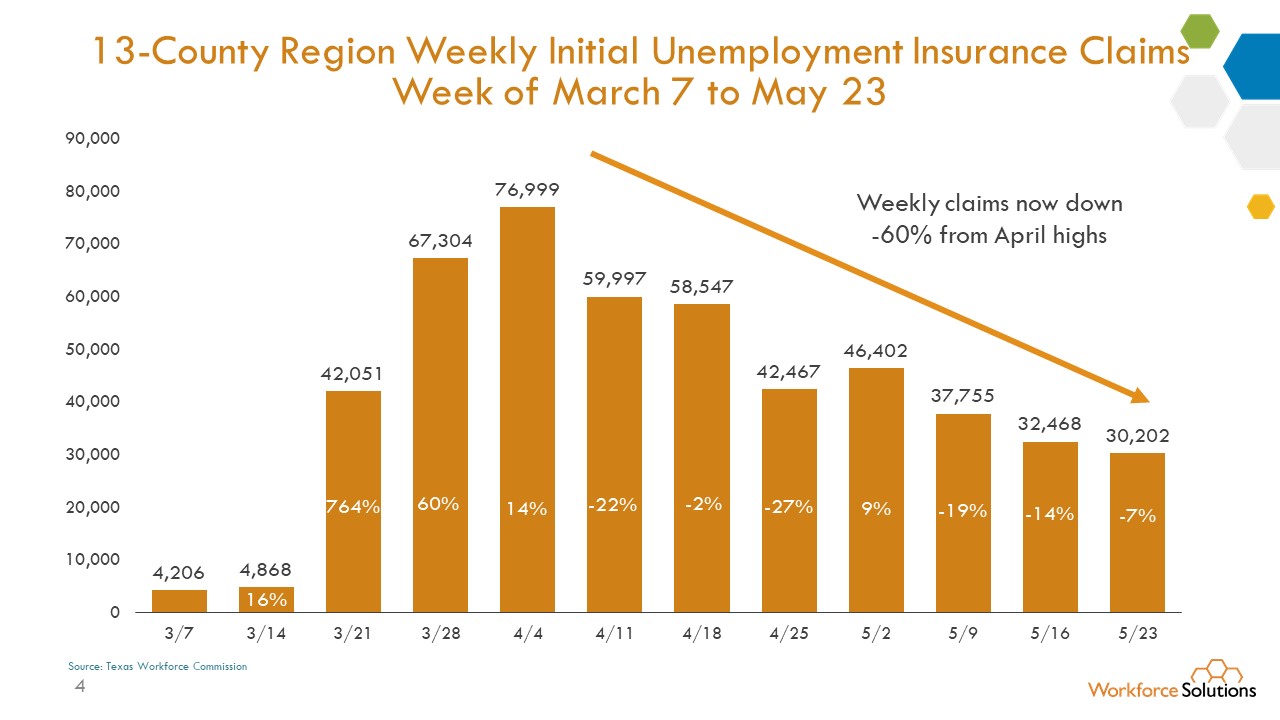 Harvey shared the data and his analysis during a meeting of the UpSkill Houston initiative’s June executive committee.

This “slow thawing” in the region comes after several weeks of rising – in some cases record-breaking, atypical and even “astonishing” – unemployment rates across the region. 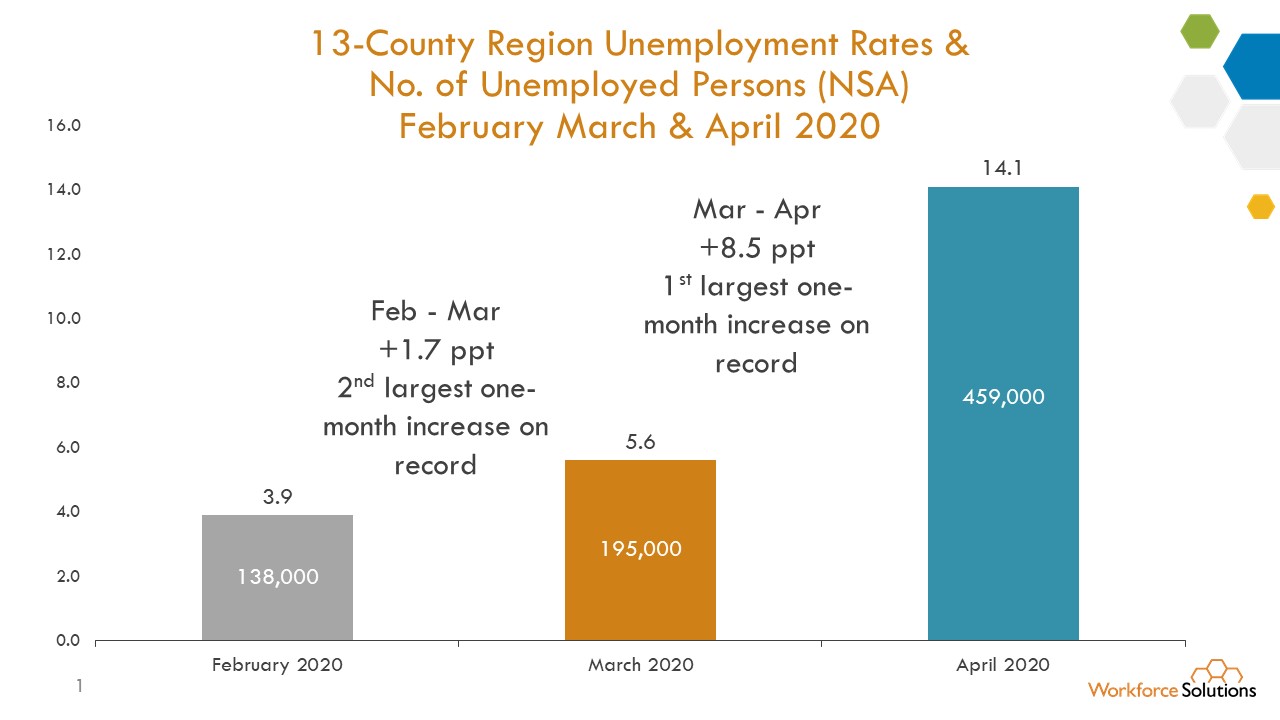 In April 2020, of the 13 counties in the Gulf Coast region 11 counties exceeded their all-time high unemployment rates. The highest unemployment rates were seen in the eastern half of the region, namely in Galveston, Liberty and Chambers counties.

Galveston County was particularly impacted by the closure of hospitality and tourism-related businesses in mid- to late-March. Its unemployment rate increased by nearly 10 percentage points between March and April – the largest increase of any county in the region. Galveston County currently leads the region in unemployment rates for only the second time in the last 30 years.

Meanwhile, Harris County’s unemployment rate of 14.4% was just higher than the regional average of 14.1%.

Every one of the region’s 17 cities for which data are available saw record-breaking all-time high unemployment rates, with each posting double-digit rates.

Nearly one out of every four working-age adults in Baytown were unemployed in April, according to Harvey, and its unemployment rate – at 23.4% - was the highest in the region.

“Baytown traditionally has had the highest unemployment rate of our region over the last 30 years or so but one-in-four [working-age adults unemployed] is still a pretty extreme number,” he said.

“Those cities have traditionally had higher unemployment rates in our on average over the last 30 years,” he said. “The fact that it is ‘Ground Zero’ for our petrochemical industry is concerning but it tends to be the jobs that are always in flux around the plants.”

(Texas City ranks third on the unemployment list and Pasadena fourth. Alvin rounds out the top five with an unemployment rate of 15.5%.) 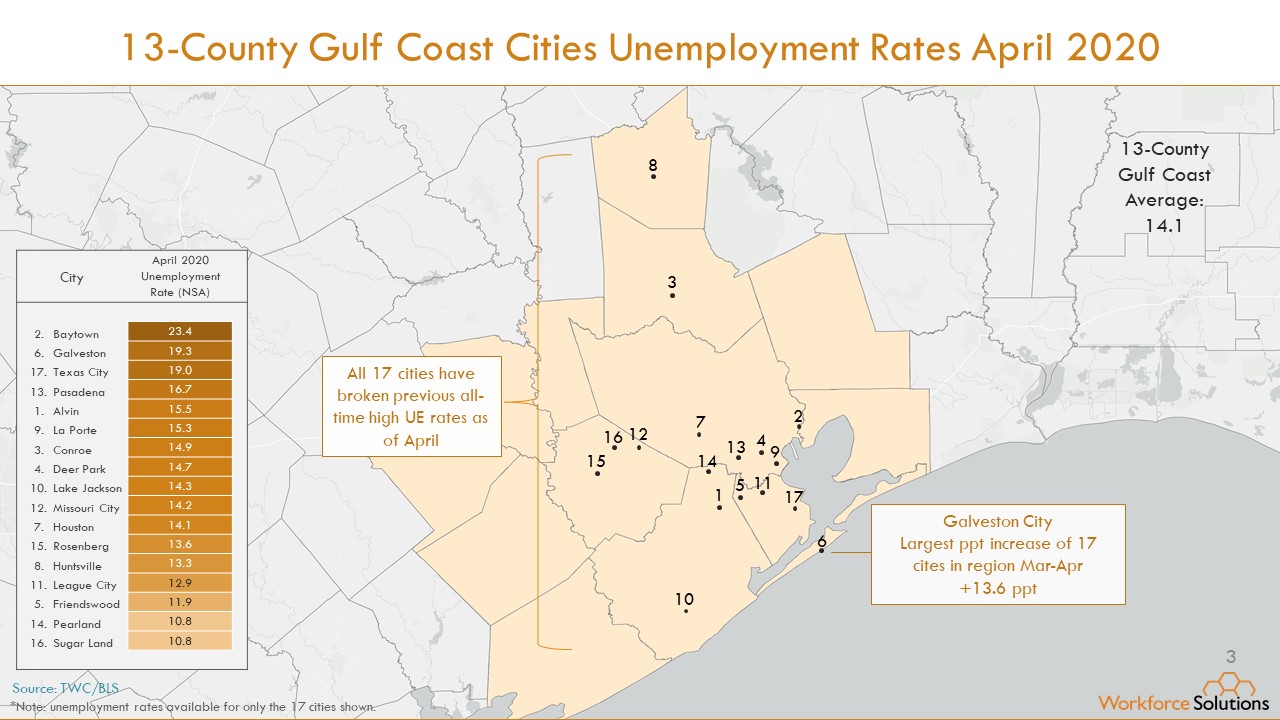