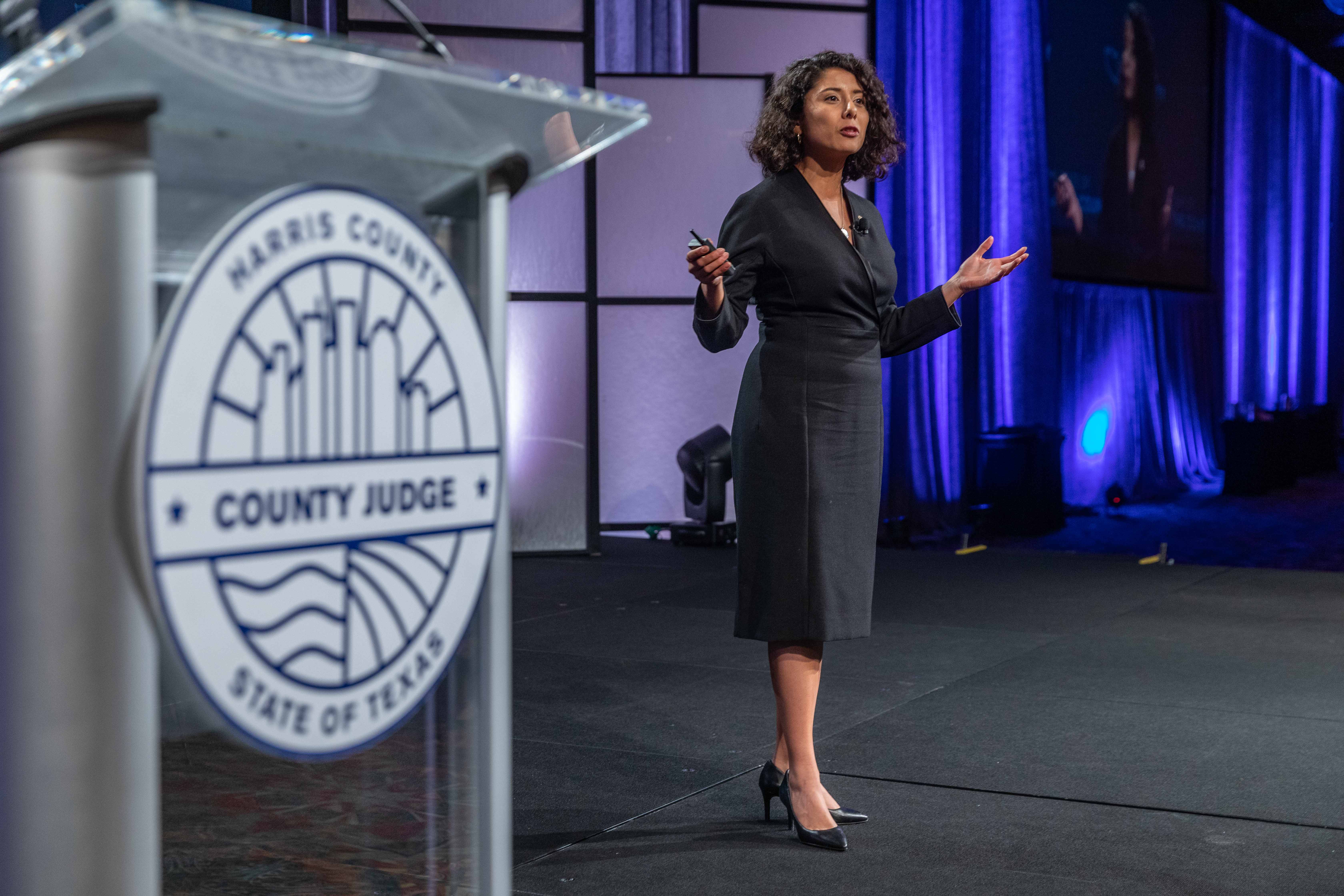 In her first State of the County address, Harris County Judge Lina Hidalgo detailed the county’s accomplishments in key areas, including community engagement, criminal justice reform, resiliency and flood control. Judge Hidalgo also announced that early childhood development would be a focus for her administration in 2020.

Hidalgo started her TED-style keynote with a number displayed on the screen: $5,093,442,000. That is the county budget for the current fiscal year.

Hidalgo noted that during her campaign last year and in the early days after she was elected, several people told her county was really just responsible for maintaining roads and bridges. “That’s more than bridge money,” Hidalgo said, pointing at the screen. “With that sort of budget, you can build bridges to opportunity for the people of Harris County.”

Harris County is the third most populous county in the nation and is experiencing rapid growth in comparison to other major counties across the county. It is home to nearly 4.7 million residents and more than 116,000 businesses.

“The strength of Harris County is essential to the overall strength of the greater Houston region and its place among top metros,” Partnership President and CEO Bob Harvey said.

Hidalgo highlighted the drainage improvement projects the County fast-tracked for the 105 subdivisions in unincorporated Harris County that flooded due to poor drainage infrastructure, and the 1,178 homes that were saved from potential flooding as a result of the work to buy out houses in floodplains.

“The truth is, there is no silver bullet to flooding. But we can take the most meaningful, aggressive steps to get to where we need to be,” Hidalgo said. “That’s why we're shifting the paradigm on how we deal with flood control to put people and science over politics.”

Harvey applauded Judge Hidalgo’s response after Tropical Storm Imelda and the establishment of the Imelda Assistance Fund. He referenced the Partnership’s work with county, city and state officials to pass state legislation that secured $2 billion flood planning, recovery and resilience package. That will draw down an additional $5 billion in federal funding.

With the approval of State Constitutional Amendment Proposition 8 earlier this month, $793 million will be dedicated to address future flood mitigation needs across the state of Texas through the creation of the Flood Infrastructure Fund.

“The momentum to achieving significant improvement to the region’s flood resiliency is building, and necessary for our continued growth,” Harvey said. “The Partnership looks forward to working with Judge Hidalgo and her administration to ensure this momentum continues and a more resilient Houston prevails.”

In highlighting the County’s criminal justice reform efforts, Hidalgo cited an independent study showing that over a five-year period with bail reform in effect, 1,600 fewer felonies would have been committed. After accounting for both reductions in jail time and increases in probation time, the county would have saved an estimated $20 million in supervision costs alone.

“The bottom line is that we don’t have to choose between protecting public safety and protecting the constitutional rights of defendants,” Hidalgo said.

On the air quality front, Hidalgo pointed to the county committing millions of dollars in September to build a state-of-the-art air monitoring network, hire public health and safety experts, and add resources for HazMat First Responders. "We are working to shift from a reactive, to a proactive stance when it comes to our environment," she said. "All told, this represents the most significant expansion of the County’s ability to address environmental challenges in at least 30 years."

Hidalgo ended with an announcement of the County’s focus in the coming year – an emphasis on early childhood development.

“Early childhood programs have more of the strongest returns on investment for any type of public program,” Hidalgo said. “Early next year, we will engage our community in a series of conversations regarding early childhood development and education during the crucial first 3 or 4 years of a child’s life.”

With four times as many people having come to speak before Commissioners Court this year as compared with all of 2018, high levels of community engagement are expected as Hidalgo seeks community input on the new initiative.

“Our job is to focus on the intersection between what meaningfully impacts our community and where the county has the authority and ability to make a positive difference,” Hidalgo said. "The issues we prioritized this year were about core immediate needs. Tomorrow is about not only continuing that work, but also building on that progress to invest in our future."