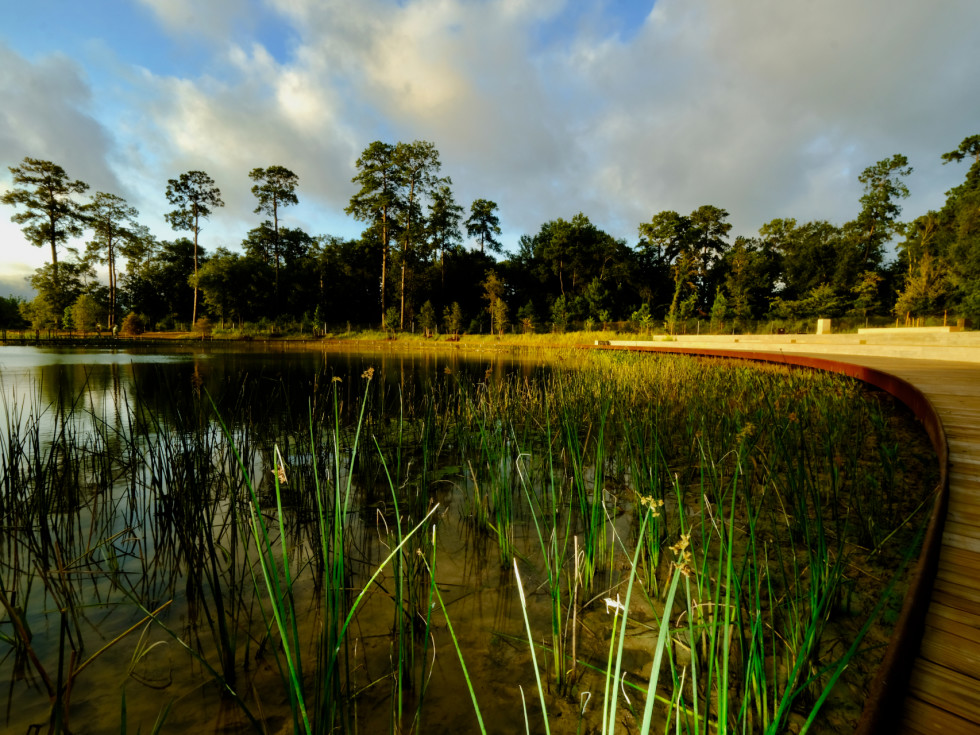 In a little more than a decade, Houston has transformed some of its most recognizable green spaces into world-class parks, helping advance a new reputation for the city as an outdoor mecca. From the redevelopment of the 160-acre Buffalo Bayou Park just west of the Downtown skyline to the creation of the wildly popular Discovery Green that now anchors the convention district, the Bayou City has delivered a series of new quality of life amenities to residents. And it’s far from over.

In July, a new, 100-acre section of Memorial Park debuted, setting the tone for the park’s ambitious 10-year master plan. The $35 million phase one of the Clay Family Eastern Glades is the first major project of the plan and includes new trails, picnic areas, native wetlands, a 5-acre lake, savanna, food truck court and more. The beautifully landscaped and reimagined area is on the east end of the park.

“The [Memorial Park] Conservancy has done impressive work restoring nearly 40 acres of degraded habitat in Eastern Glades so far and planting more than 150 native species to help promote and sustain wildlife,” said Nancy Kinder, president and CEO of the Kinder Foundation and a pivotal park partner, in a statement. “Restoring the landscape not only creates wonderful spaces for people to enjoy nature, but also provides important benefits for the overall ecology of the Park and plays an integral role in stormwater management.”

In September, another Houston green space opened to the public—this one decades in the making. Advocates have long sought to establish a botanic garden in the city that would help educate residents and visitors on the flora of this region and other parts of the world and create a verdant urban refuge in the heart of the city. The transformation of a former golf course in Houston’s East End began in 2018 and now the first phase of the 132-acre Houston Botanic Garden is welcoming visitors.

More than 350 different plant varieties from around the world combine to create the attraction’s Global Collection Garden, which includes everything from a tropical rainforest to an arid desert.

“Adding a world-class botanic garden to enhance the breadth and depth of Houston’s cultural offerings has been a long time in the making,” said Claudia Gee Vassar, president of the Houston Botanic Garden. “We believe the benefits of an extensive outdoor museum like the Houston Botanic Garden will be especially desirable at a time when so many are looking to engage with and be inspired by nature.”

Many are surprised to learn that Houston is one of America’s greenest cities. The metro area boasts 500 miles of interconnected bikeways, 380 developed city parks and 170 open spaces. And we continue to build on that reputation. Through the investments of Houston’s top corporate and civic leaders, by the end of this year, more than 3,000 acres of unused land will have been converted to public park space in just the last few years.

Mayor Turner Addresses COVID Response, Resiliency and More in 2020 State of the City

Houston Mayor Sylvester Turner discussed the Cityâs response to the COVID-19 pandemic, economic concerns and efforts to grow the next generation of local companies in his 2020 State of the City address. Â  âAs we move forward through these unprecedented times, the Cityâs foundation is strong; the City itself is resilient; and the Cityâs future is bright,â Mayor Turner said.Â  The Mayor delivered his fifth State of the City address, hosted by the Greater Houston Partnership, on October 22. He said while each of those speeches has been special in different ways, âthis one, during an unprecedented year, is significant while we are in the midst of a global pandemic, social and civil unrest, economic instability and a highly charged election season.â The city has battled the COVID-19 pandemic on several fronts over the last seven months, from leveraging new public health resources to developing small business assistance programs. Mayor Turner praised the Houston Health Department for leading âone of the most remarkable responses to the pandemic in the country.â The department has established numerous free testing sites and hired more than 300 contact tracers to help stop the virusâ spread. Â  In April, Mayor Turner tapped former Shell Energy CEO Marvin Odum to lead Houstonâs COVID Response and Recovery. ThatÂ same monthÂ he launched the Houston Health Equity Response (H.E.R.) Task Force to provide resources and education to the cityâs vulnerable and at-risk populations.Â  So far, the Mayor said, the task force has:Â  Distributed 1.3 million masks Made more than 4,000 food and supply deliveries Created the successful Mask Up! Campaign Hosted several virtual town halls to provide support and resources to those facing mental health challenges as a result of the pandemic The City of Houston also created a rental assistance program for residents and established a $20 million fund for grants to small businesses. Addressing the convention and meetings business that contributes considerably to the local hospitality industry and helps fund city promotion, Turner said nearly 200 conferences and conventions have been cancelled or rescheduled since Marchâa $332 million economic hit. Houston First Corporation, the agency charged with booking conventions and marketing the city as a destination, has managed to rebook 23 out of the 24 citywide conventions that were planned during the period for future dates.Â  âThis was a critical and proactive response that will provide economic resiliency in the years to come, yet the impact for 2020 and into 2021 will be significant for our hospitality community,â the Mayor said.Â  In February, the City launched Resilient Houston, a framework for how Houston should address future challenges and sudden shocks, from transportation infrastructure to natural disasters. Two months later, the city unveiled its first ever Climate Action Plan with a goal of reaching carbon neutrality by 2050. The Mayor said more than 5,200 individuals participated in the inaugural Climate Action Week to help kick off implementation of that plan. These efforts followed the late-2019 launch of Evolve Houston, a public/private partnership with NRG, Shell, CenterPoint, the University of Houston and Houston Sustainability Office to accelerate electrification of private and commercial fleet vehicles in the city.Â  Mayor Turner said that this year the City received its latest hazard mitigation grant from Federal Emergency Management Agency to help combat flooding. Itâs the fourth and final grant the City sought to complete large scale flood mitigation projects in the most vulnerable areas.Â  Turning to efforts to grow Houstonâs technology and innovation ecosystem, Mayor Turner pointed to several announcements this year that have positioned the City to increase entrepreneurship and digital skills.Â  In September, the Rice Alliance announced the creation of a new clean energy accelerator to help create a new generation of young entrepreneurs focused on our energy future.Â  In June, Greentown Labs, the nationâs largest climatech incubator out of the Boston area, announced plans to open a Houston incubator next year in the 16-acre Midtown Innovation District. The 40,000-square-foot Greentown Houston will have space for up to 50 emerging companies. They announced Greentown Houston's inaugural members in October.Â  The City has also expanded its digital alliance with Microsoft through the tech companyâs Accelerate program. The program is designed to address economic recovery through skilling both underserved communities and re-skilling the many Americans impacted by COVID-19. âHouston is a City that continues to transform, to innovate and to be an example for the rest of the country on how to be diverse, welcoming and inclusive,â Mayor Turner said. âAs we gradually take steps to reopen, we recognize that the full recovery will take several years, but when we work together, we put ourselves in the best position to manage the virus and rebound from it.â In opening the event, Partnership President and CEO Bob Harvey said 2020 has proven to be among the most difficult years in Houstonâs history. "The COVID-19 pandemic, the fall of the oil markets, renewed alarm over racial injusticeâthese issues and others have presented considerable challenges for our city and others around the country,â Harvey said. âBut time and again, Iâm amazed by the resiliency and perseverance of Houstonians to rise to the challenge. Â Throughout these last seven months, Houston has shown the world what itâs made ofâworking to fix broken systems, growing new industry sectors, and creating a better quality of life for all who call this place home.âÂ  The Mayor addressed other issues including racial justice, homelessness, mental health and street infrastructure in his speech. Watch the full presentation on this page when it's posted later this week.Â
Read More

One Houston Together: The Business Community's Role in Addressing Racial Inequities

Through a series of webinars held this month, theÂ Partnership's One Houston Together initiative has explored multiple facets of racial inequity in our community, from how race impacts access to quality education to its effect on residents' health outcomes. Now, armed with this knowledge,Â what can individual companies and the broader corporate community do to help eliminate the disparities?Â  The fifth installment of theÂ One Houston Together webinar series looked at the Business Community's Role in Addressing Racial InequitiesÂ and featuredÂ LaTanya Flix, Founder and Principal, CauseAdvance;Â Ingrid Robinson, President, Houston Minority Supplier Development Council; Nicole Zhao, Senior Consultant, Human Capital, Deloitte; and moderator Bob Harvey, President and CEO, Greater Houston Partnership.Â  Before the conversation got underway, Partnership Board Chair Bobby Tudor gave an update on the progress of One Houston Together, reminding the audience of the organization's commitment and the principles guiding its actions. âOne thing thatâs really important to us at the Partnership, and certainly to me as the Chair, is that this needs to not just be about dialogue but about action," Tudor said.Â âWe are committed to actions that make things better and lead to a more just and racially inclusive community in Houston, and in particular the business community in Houston.â We invite you to watch the full conversation by clicking the video recording to the right. Discussion topics included:Â  How specific companies and organizations have begun to take action.Â  Ways that companies can make sure their efforts are meaningful instead of "checking a box" Specific company efforts at diversity, equity and inclusion that work, and those that do not.Â  Reducing implicit bias at key points in the talent life cycle.Â  The obstacles that remain for minority-owned businesses and how companies can increase their supplier diversity.Â  How businesses and organizations can act beyond their own walls to address racial inequities in the community.Â  âWhen the business community is serious about an issue, they establish clear benchmarks on what they are trying to achieve and they hold themselves accountable," Harvey said. "If weâre serious this time about racial equity and justice, then we should set benchmarks for our communities that go beyond what we can directly impact in our businesses. WeÂ should hold ourselves accountable for how weâre shaping, orÂ helping shape, the community.â Learn more about One Houston Together. Register today for our upcomingÂ Houston NEXT: An ERG Summit onÂ Oct 16.Â  Watch previous One Houston Together webinars:Â  Understanding Racism Education and Racial Inequities Health and Racial InequitiesÂ  Developing Equitable CommunitiesÂ
Read More