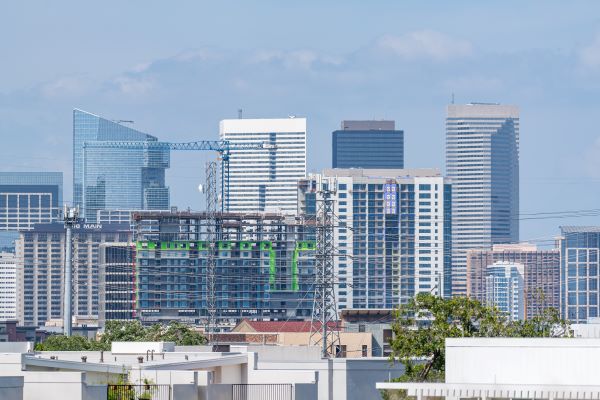 The value of commercial and multifamily construction starts in the Houston region dropped 47% in 2020 to $4.5 billion, according to the latest data from Dodge Data & Analytics. The decline, brought on in large part by the COVID-19 pandemic, followed a 55% gain in starts in 2019.

The largest multifamily project to break ground during the year was the $217 million Hanover Square & Bayou Apartments, followed by the $200 million High Street Residential Apartments.

“The pandemic is having a significant negative impact on commercial and multifamily construction across the country,” stated Richard Branch, Chief Economist for Dodge Data & Analytics. “While some areas stabilized over the summer, the current wave of the virus has further hindered activity. The recently passed $900 billion stimulus plan will go a long way towards re-energizing the economy.” Branch continued, “The construction sector will show signs of recovery in 2021, but, the road back to full recovery will be long and difficult. The effects of the pandemic on the U.S. economy and building markets will be felt for several years.”

Houston ranks 10th in the U.S. in terms of the value of new construction starts in 2020. New York, Washington D.C. and Los Angeles are the top three markets in order.

View the latest real estate data from the Partnership.

Despite rising inflation and concerns over a possible recession, Houston’s hot retail market is showing no signs of slowing down.  A new report from real estate giant CBRE shows Houston’s occupancy rate inched up to 94.3% in Q2, a 0.8% increase over Q1. The market absorbed 1.6 million square feet of space with the Far North submarket leading the way. CBRE records 668,000 square feet of new retail space hit the market in the most recent quarter with another 4.2 million square feet under construction—that’s nearly 1 million square feet more than was estimated in Q1 and indicating developers are bullish on the market’s future.  Houston recovered all of the jobs it lost at the outset of the pandemic last quarter and data shows consumer spending was up 6.6% in Q2 over the previous quarter.  A number of high-profile development projects across the region are adding significantly to the retail footprint. The first phase of the massive East River project just east of Downtown will include 100,000 square feet of retail. The Katy Boardwalk District will bring 155,000 square feet of retail to that community. And hundreds of thousands of square feet of new space is set to come online in coming years across multiple mixed-use projects lining Allen Parkway to the east of Downtown.  Unlike the office and industrial sectors of commercial real estate that rely more heavily on broad business conditions, retail growth is weighted more toward overall population growth. While the City of Houston and Harris County saw declines in population in the most recent Census data, the region as a whole added more than 69,000 new residents this year; the current metro population now stands 7.2 million.   Learn more about living in Houston.
Read More