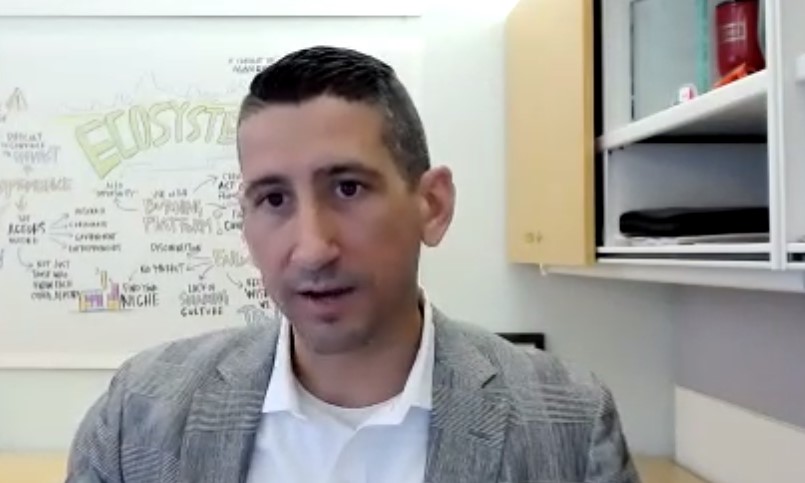 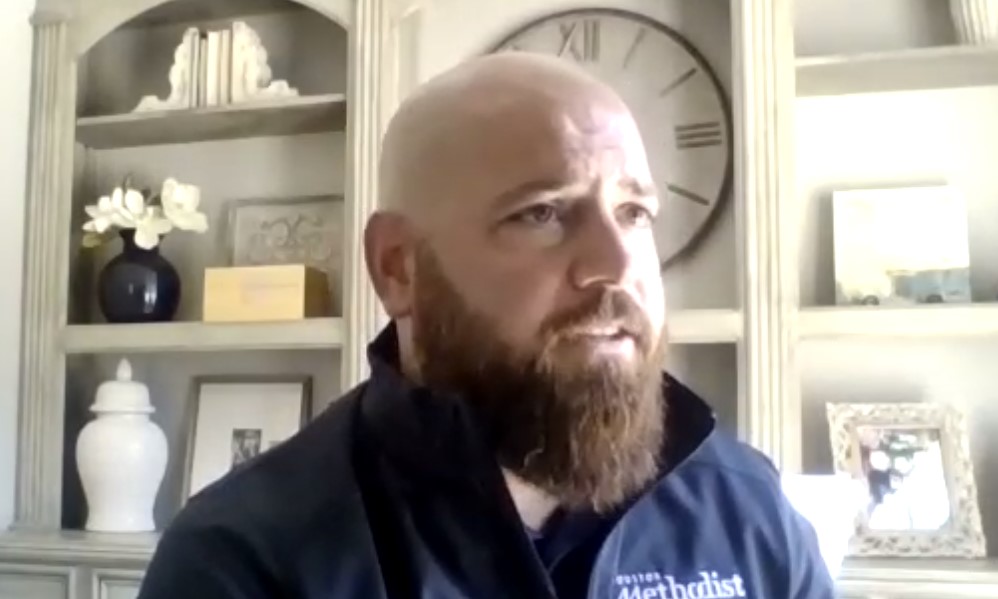 Josh Sol, Administrative Director of Innovation and Ambulatory Clinical Systems at Houston Methodist Hospital, was a panelist as part of the HealthTech Beyond Borders virtual event

Leaders from Houston's innovation ecosystem recently told an international audience how the nation's fourth largest city is supporting new technologies, products and services within one of the most robust health care systems in the world.

Josh Sol, Administrative Director of Innovation and Ambulatory Clinical Systems at Houston Methodist, and Robert Pieroni, Economic Development Director at Central Houston, took part in a panel highlighting health care innovation on August 11. The discussion was part of HealthTech Beyond Borders, a virtual global conference created to help facilitate business opportunities for medical technology companies in the U.S. and Chile. The event also included speakers from innovation hubs in Chicago and Philadelphia.

Here are highlights of what Sol and Pieroni said during the discussion:

On why international health care startups prioritize the Houston market

“There is a tone and shift that we’re seeing in the Houston area that is focusing in on innovation,” said Sol, who noted Houston Methodist's hub alone has drawn interest from innovators all over the world. Methodist is one of 61 member institutions that make up the Texas Medical Center, the largest medical complex in the world.

"When you really start looking at it from a scale perspective of patient testing and data, we really dwarf just about every other city around the world, and so it’s something we’re very proud of,” said Pieroni. “It is one of our unique assets that we’re actually building upon to be the Third Coast for Life Sciences.”

"2017 was our awakening to jumpstart the Houston innovation economy," said Pieroni, alluding to how Houston's unsuccessful bid for Amazon's second headquarters, HQ2, was a turning point for the city's innovation ecosystem. "Along that line, we started to create hubs for startups to land with coworking, accelerators, incubators, and really all those wraparound services."

Pieroni pointed to a few of those hubs, including Downtown Launchpad, a 17,000-square-foot innovation hub in the Amegy Bank Houston building on Main with resident partners including startup accelerators MassChallenge and gener8tor, as well as incubator Impact Hub Houston. He also talked about The Ion, the 266,000-square foot hub in the renovated Sears building at the heart of the Innovation District  designed to bring entrepreneurs, corporate and academic communities together in a collaborative space. He also mentioned health care innovation specifically a focus at places like JLABS @ TMC, the startup accelerator and biotech incubator that serves as the largest JLABS footprint in the U.S. with over 34,000 square feet of common, wet lab and office space.

Sol acknowledged the health care industry can be challenging for startups to break into, but added founders can find a welcoming environment in Houston.

"Getting into a health care organization is definitely hard, especially to start doing pitches," he said. "I would say there is a flavor and a change that’s happening in the [Texas Medical Center] where it’s a little bit easier to get your companies in to pitch to an innovation team.”

Sol also touched on the impact COVID-19 has had on the health care industry.

“Health care is in a digital evolution," he said. "While the pandemic has been tremendously impactful, we’ve seen health care digital adoption increase by 10 years in the span of one because of the pandemic.”

Pieroni laid out what startups should consider as they pursue funding, including:

Pieroni and Sol both encouraged founders to get connected and involved with Houston's innovation ecosystem.

On VC investment growth in Houston

Houston has already raised $1 billion in venture capital in the first half of 2021. Life sciences and health care have become Houston's top-funded VC-funded industry, ahead of information technology and energy.

"So we have just seen a flood of venture capital money, and I think it’s because we have built these hubs that allow people to go to places to see large concentrations of startups," said Pieroni.

Josh Sol, Administrative Director of Innovation and Ambulatory Clinical Systems at Houston Methodist Hospital, was a panelist as part of the HealthTech Beyond Borders virtual event

Small Biz Insider: Health Tech Startup Strives to Ease Access to Some of the Hardest Conversations

Conversations and decisions regarding advance care, especially end-of-life care, can be challenging. A Houston health technology firm wants to make that a little easier. Koda Health's advanced care-planning platform uses AI to guide difficult conversations in health care. Just a year-and-a-half old,Â the startup's already made some incredible strides. That includes recent recognition in Forbes. The publication named Koda Health's co-founder and CEO Dr. Tatiana Fofanova in its Next 1000 list of inspiring entrepreneurs and small business leaders who are redefining what it means to build and run a business amid the new normal. On this episode ofÂ Small Biz Insider, we talk with Dr. Fofanova about the startup's mission to make some of the most challenging health care decisions more accessible and equitable. Topics include:Â  Challenges for individuals and their families when it comes to advanceÂ care planning How Koda Health's AI platform streamlines those conversations Plans for a grant from Koda Health recently received from the National Science Foundation Programs, resources or tools recommended forÂ entrepreneurs in Houston's health tech space The Small Biz InsiderÂ podcastÂ is part ofÂ our digital series highlighting entrepreneursÂ in the greater Houston region who are making a big impact in the small business community.Â  FollowÂ Small Biz Insider through these popular podcast apps:Â  Listen on Apple Podcasts Listen on Google Podcasts Listen on Spotify
Read More

Connecting the Dots to Help Get Houston Back on Track

Houston, like most places in the world, is forever changed by the pandemic that broke in the spring of 2020. The metro region lost 361,400 jobs in the ensuing recession, making it worse than the jobs lost in the Great Recession and the oil bust in the 1980âs. Houstonians and our local economy have been hurting ever since, and though much progress has been made, we have only recouped about 60 percent of those lost jobs. More needs to be done to help and support people and employers. It is worth reminding ourselves how we got here. The COVID-19 epidemic has been a disrupting event like few of us have seen. It shut us down and stressed our hospital systems almost to the breaking point. We worried about the sick and grieved over those who we lost. Our workforce suffered as millions of people stayed home and away from work. Many stayed away for a long, long time, even after employers began to open their doors again. The employment gap has hindered our recovery and put us on pause in a way we havenât seen in our lifetime. Effects of the pandemic have disproportionately impacted and displaced women, communities of color, and workers with low levels of educational attainment.Â  The Partnership has for years worked with member organizations and local governments to make greater Houston a metro that could thrive by building a strong, diverse 21st century economy, offering a great quality of life, and ensuring opportunity for all. Â When the pandemic threatened to upset this path, the Partnership tapped two community leaders, Matt Morris and Chase Robison, to provide key leadership and work with its Regional Workforce Development division to help chart a path forward. The idea for Houston Back on Track was born. During anÂ UpSkill Works ForumÂ on September 8,Â our first stakeholders announced Houston Back on Track as the job recovery initiative that promises to connect the dots between displaced workers and our employer partners. Through key partnerships and new ways of combining and coordinating our collective efforts, Houston Back on Track will provide job seekers with the necessary support and resources they need while searching for their next great role and career in healthcare, customer service, transportation/distribution. This alliance of community partners, education providers, and employers is a game changer that should help put Houstonians back to work in jobs with great opportunities for upskilling and growth. Houston Back on Track is supported by organizations and companies committed to making positive change. On the employer side, we are proud to have the support of: HCA Houston Healthcare, Houston Methodist, Mustang CAT, Primary Services, and Silver Eagle Distributors. These companies are seeking to hire hundreds of new employees through this effort. Our community partners will provide career coaching and wraparound services to help prepare job seekers for these roles. They are Wesley Community Center, Houston Area Urban League, Change Happens!, WorkFaith, LISC Houston, and United Way of Greater Houston. While some of these community partners will provide critical preparation and training for clients directly, we will also tap into the expertise and services of our education providers: Lone Star College, Houston Community College, and San Jacinto College. Finally, we will offer online training through LinkedIn Learning, a platform that provides a rich selection of courses in many areas of professional development. This alliance is designed for impact and will scale in the coming months. We know our challenges are great. Fears about contracting the virus are still keeping a gap between people and jobs. This is not our only variable. Many people have reconsidered what they want from their careers, and they are hoping to make a change in industry and occupation. Others want more stability, higher wages, and better benefits than they had before the pandemic. There are impacts that are still unknown to us, but one thing is certain: many job seekers will build off their existing skills and develop new skills as they move into the roles they want. It may be that our work is cut out for us, but we are committed. The partners behind Houston Back on Track are dedicated to not just connecting the dots, but also to helping improve lives. A great job can change the trajectory of an entire family. Our efforts are underway, and we will grow and scale in coming months. Our work starts with employers who need to hire qualified, entry-level workers in occupations with pathways for growth. Join Houston Back on Track if your company is committed to charting a new path forward for Houstonians displaced by the pandemic. Good results are coming. Â  Connect with the Houston Back on Track team by visiting HoustonBackOnTrack.org or contacting BackOnTrack@Houston.org.Â
Read More