A new report on the U.S. tech industry ranked Houston 12th in tech employment among the 46 largest metros. The region’s 227,800 tech-related jobs placed Houston behind Detroit and Atlanta but ahead of Philadelphia and Minneapolis, according to Cyberstates 2019, the Computing Technology Industry Association’s (CompTIA) annual assessment of the digital tech industry. 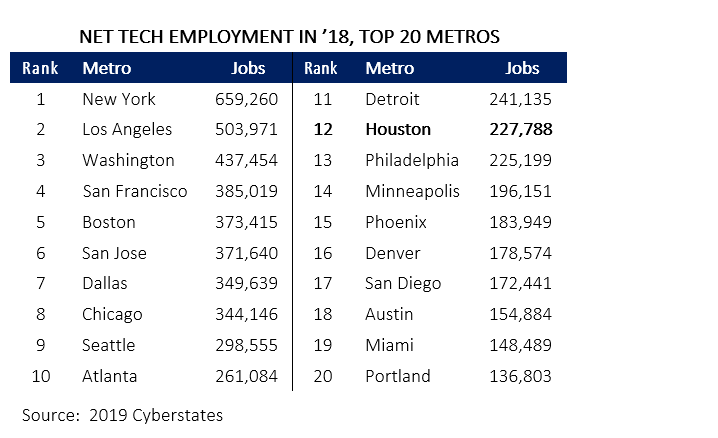 Cyberstates is considered the definitive guide to U.S. tech sector analytics. The report looks at workforce data at the national, state and metro level. It focuses on sectors involved in creating, enabling, integrating and supporting technology – either as a product or service. One of Cyberstates’ strengths is that it considers tech-focused jobs that other reports too often ignore. Their method counts three groups of workers: 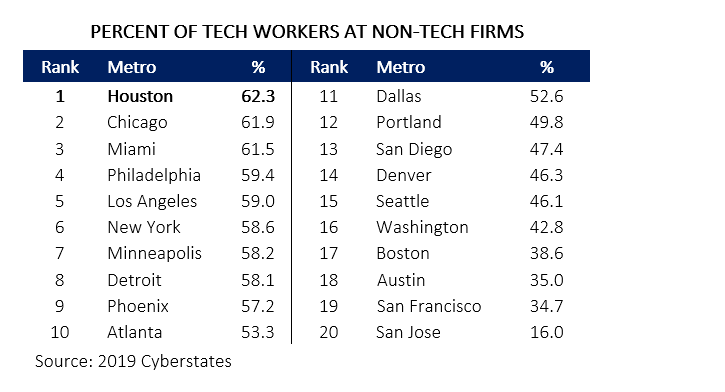 That doesn’t mean Houston’s standalone tech sector is insignificant. According to Cyberstates, the tech industry contributed $28.1 billion to Houston’s Gross Domestic Product (GDP) in ’18, 5.8% of the total.  To put that in perspective, health care generated $24.6 billion, transportation $22.8 billion, and the annual budget of Johnson Space Center is $4.6 billion.  By comparison, tech contributed $31.1 billion to Austin’s economy in ’18, 23.5 percent of the capital city’s GDP. Essentially, Houston’s tech sector is the same size as Austin’s, just spread over a larger economy and with about 60,000 more tech occupations outside the industry.

One weakness of CompTIA’s analysis is that it undervalues the contributions to GDP from those professionals at non-tech firms. Given that two of every three tech workers in Houston are employed in a non-tech industry, tech’s contribution to Houston’s GDP is likely much larger than CompTIA reports.

Another aspect of CompTIA’s report that cast Houston in a decidedly negative light was job growth. The report found that while most cities gained tech jobs in 2018, Houston’s net tech employment fell by 2,300 jobs – a startling stat that lead to this gloomy headline in the March 29 edition of the Chronicle. But those numbers were misleading. The Partnership reviewed the data and it appears the losses were modeled, not actual counts, and based on data from ’16 and ’17 – the peak of the oil downturn. Within two days of the CompTIA report’s release, the Bureau of Labor Statistics (BLS) posted tech occupations data for ’18. Using CompTIA’s methodology, the Partnership calculates that Houston actually gained a minimum of 550 tech jobs last year.  Most optimistically, Houston saw the greatest gains in high-paying tech jobs, adding 2,710 jobs in the group of occupations paying over $100,000.  Most of the losses came in the lower skilled jobs related to tech manufacturing.

Texas and Houston were among the national leaders inÂ month-over-month growth ofÂ IT job postings in January.Â  That's according to the latest findings from CompTIA, one of the IT industry's trade associations. It also reported Texas was the second-leading state inÂ total IT job postings last month.Â  Houston continues to rise as a national leader in technology with about 150,000 tech workers, many of which are outside traditional tech industries.Â In fact, Houston has the highest share of tech workers at non-tech companies of any top 20 U.S. metro. Nearly two-thirds of Houston's high-tech workers are employed in industries other than computers and software. Overall, Houston has the 12th largest tech sector in the U.S. with a $28.1 billion impact to the regional economy. The CompTIAÂ findings are part of the association's broader report. It said employment in the U.S. technology sector grew by about 16,000 new positions in January, and companies added some 370,000 core information technology workers last month.Â  "Employers continue to signal the need to expand their base of tech talent to meet short and longer-term business objectives," said Tim Hebert, executive vice president for research and market intelligence at CompTIA. CompTIA's report comes just a day after a differentÂ study ranked Houston the sixth-best city for women in tech. SmartAsset's annual study examined four factors: gender pay gap, earnings after housing costs, women's representation in the tech workforce and four-year tech employment growth. Women make up nearly 26% of tech jobs in Houston, and Houston has the eighth-highest average earnings amount for women tech workers at almost $64,500.Â And while researchers concluded the biggest cities aren't always better for women in tech, Houston was the only one of the five most-populated cities to make it into the top 15.Â  Click here for CompTIA's report on January's U.S. tech employment. Read more about Houston's tech sector.
Read More

Bayou Business Download is a podcast from the Greater Houston Partnership that dives into the data and analytics influencing the regionâs economy and the core business sectors that drive Houstonâs growth.Â  On this edition of Bayou Business Download, we chat with Partnership Director of Data Analytics Josh Pherigo about the state of Houstonâs startup and funding scene going into 2020. What happened in the VC landscape in 2019 and what does that suggest about the year ahead? Â  Here are 5 key takeaways from Pherigo:Â  Houston is home to the first tech unicorn of the new decade. In the funding realm, a unicorn is a privately held, startup technology company valued at $1 billion or more. Houston has not had such a company, until now. HighRadius, an AI-powered fintech software company, raised a $125 million round of funding in January, propelling the Houston-based business' valuation over $1 billion. While Houston has seen several tech firms reach $1 billion valuation in the pastâthink Compaq or BMC Software for exampleânone have done it outside of IPOs or mergers.Â  Â  Houston had its best venture capital year ever in 2019. A total of $543 million in VC funding was raised by Houston startups during the 12-month period, so thereâs perhaps never been a better time to raise startup funding in the region than right now, Pherigo said.Â  Â  2019 was also a year of milestones for the local startup and innovation ecosystem. There were a series of major announcements around new accelerators and incubators, from gener8tor and MassChallenge to the Cannon. Rice University broke ground on The Ion in Midtown. Altogether, these projects have helped deliver the infrastructure and support tech startups need to succeed. Now, the stage is set to see what the waves of classes coming out of these programs can do in the next year and beyond.Â  Â  Established tech companies in places like Silicon Valley are looking for expansion opportunities. We see a growing number of businesses in growth mode looking to expand with new offices elsewhere around the country, which presents an opportunity for Houston. But the region needs to be aware that competition for these second or third offices is intense among peer cities. We need to focus on what makes us stand out.Â  Â  With 2019 venture capital funding in hand, 2020 should be a growth year for several Houston startups. Pherigo said heâs excited to see those companies that received funding start using it to build out their offices, ramp up hiring and prove what they can do. Listen to this and future episodes of the Bayou Business Download podcastÂ here. Get updates on key economic indicators and other data and analysis from the Partnership Research teamÂ here.Â
Read More

For Houston to continue moving forward as a great global city, we must further the innovation eco-system in order to attract tech and start-up companies. This council examines how the greater Houston region can…