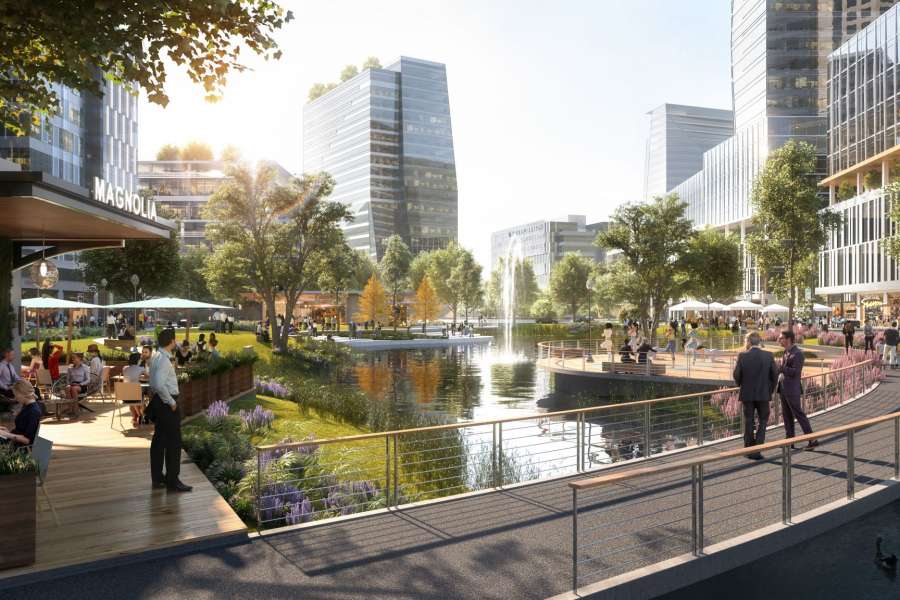 A rendering of Levit Green

Aided by a high percentage of PhDs and a low cost of living, Houston ranks No. 13 in a new analysis of the nation’s top 25 life sciences markets from real estate firm CBRE.

The report sheds light on the growth of life sciences hubs beyond the traditional coastal markets such as Boston and San Diego. Houston is getting a boost from the growing Texas Medical Center and an influx of venture capital earmarked for life sciences research.

Job growth in life sciences professions – from bioengineers and biochemists to microbiologists and data scientists – expanded by 79% over the last two decades to roughly 500,000. In comparison, the overall U.S. job growth rate in that span was 8%, according to CBRE. That surge in life sciences jobs boosted mainstay markets such as Boston and San Francisco as well as emerging hubs including Nashville, Salt Lake City and Houston.

The report suggests that Houston’s life sciences labor market offers an attractive combination of affordability and a particularly strong PhD talent pool. Major research universities and medical institutions such as the UT School of Public Health and Baylor College of Medicine boosted the city’s ranking ahead of other Texas markets in CBRE’s analysis.

“Houston’s favorable business climate and cost of living, combined with the size of its scientific talent pool and medical institutions, make it an attractive market for life sciences industry expansion,” said Scott Carter, Senior Vice President, Life Sciences & Healthcare at CBRE in Houston. “Houston is projected to lead the nation in population growth over the next five years, which will only strengthen the appeal of its labor market.”

Houston ranks No. 1 in the nation when it comes to life sciences wages relative to the cost of living, making it more attractive for life sciences professionals to enjoy a high quality of life. PhDs account for 18.5% of the 1,300 Biological and Biomedical Sciences degrees issued from the Houston MSA annually – the highest concentration nationwide. And Houston produces 4.2% of such PhDs in the U.S. – more than all but a few major life sciences markets do.

“Millions of square feet and billions of dollars of life sciences development is underway or planned in Houston to break down longtime silos between commercial, academic, and medical sectors,” Carter said. “Leveraging the unmatched scale of the Texas Medical Center, these new moon-shot investments are building a launchpad to rocket Space City into a new era as a global hub for scientific and human progress.”

Highlighting the rapid investment in the city’s innovation ecosystem, Houston has one of the country’s fastest-growing pipelines for life sciences venture capital funding, which increased by 937% in the last five years – nearly three times the nationwide increase of 345%.

A number of large-scale life sciences developments are currently in the works that will add significant amounts of new research, lab and office space to the existing market, including Levit Green and TMC3. Learn more about some of those projects. Click here to see the full CBRE report.

A rendering of Levit Green

HOUSTON (November 17, 2022) – The Greater Houston Partnership commissioned Newmark Consulting Group to conduct a study, sponsored by San Jacinto College, Lone Star College, Houston Community College, and McCord Development, focused on assessing the Houston region’s existing resources and value proposition in the life sciences industry.  Findings identified Houston’s industry-leading expertise in cell and gene therapy, biologic drug development, and molecular diagnostics; a continuous flow of new talent from regional universities; an emerging and robust commitment by community colleges to support two-year degree pathways to meet industry demands and the ability for life science companies to grow and thrive in the market. The study also identified strategic next steps for the Houston region to capitalize on these advantages.  “The Newmark study confirms what we knew to be true about the potential for life sciences growth in Houston,” said Susan Davenport, Chief Economic Development Officer of the Greater Houston Partnership. “The study will help us coalesce our regional partners around a cohesive strategy to grow and expand the industry in Houston.” Home to nearly 700 life science companies, Houston consistently ranks as a top-15 market for life sciences employment nationwide and first in Texas. Houston benefits from the densest patient population in the world, allowing for transformational clinical applications. With Houston’s robust and diverse workforce, an extensive university ecosystem and education infrastructure, along with world class research institutions, Houston is primed to capture extensive subsector gains.  Houston ranks second in the nation in clinical trial volume, with more than 4,600 currently active clinical trials, representing 15% of all active U.S. trials. Houston-area institutions received $864.1 million in National Institutes of Health (NIH) grant funding, up 16.3% from 2020. In the last five years, the region received nearly $3.9 billion in NIH funding, an average of $740.7 million per year. Supported by the world-class institutions that comprise the Texas Medical Center and Houston’s sizeable patient population, expansive opportunities exist for commercial synergies with leading healthcare providers in the region.  As a hub for translational and clinical research and pharmaceutical and medical device manufacturing, Houston is home to more than 26,000 non-healthcare life science employees. Houston’s robust life sciences workforce ranks 12th in the nation, on par with numbers reported for Research Triangle Park. Additionally, Houston compares favorably given its central U.S. location, ample space available and under construction throughout the region, a business friendly environment including accelerated development timelines, and the logistics benefits of  two international airports and the Port of Houston.  The study finds Houston has the elements necessary to attract key subsectors of the life sciences industry, particularly in cell and gene therapy manufacturing; molecular diagnostics; and biologics drug development and manufacturing. The study also identifies specific strategies to optimize the region’s “go-to-market” plan to attract more companies in this highly competitive industry.   These recommendations include accelerating workforce development programs to produce new graduates in key life sciences occupations, refining Houston’s marketing messages to highlight the region’s existing life sciences” assets and activities within life science R&amp;D and manufacturing.  Finally, the study identified the need to develop a shared regional strategy to attract and retain leading life sciences companies.  The Partnership has assembled task forces to implement the recommendations, which will be led by the organization’s Life Sciences Committee, chaired by Ferran Prat, Senior Vice President of Industry Relations and Research at MD Anderson Cancer Center. ### Greater Houston Partnership The Greater Houston Partnership works to make Houston one of the best places to live, work and build a business. As the economic development organization for the region, the Partnership champions growth across 12 counties by bringing together business and civic-minded leaders who are dedicated to the area’s long-term success. Representing 950 member organizations and approximately one-fifth of the region’s workforce, the Partnership is the place companies come together to make an impact. Learn more at Houston.org. Contact:  A.J. Mistretta amistretta@houston.org  504-450-3516
Read More