Houston's Must See Under the Radar Art Experiences 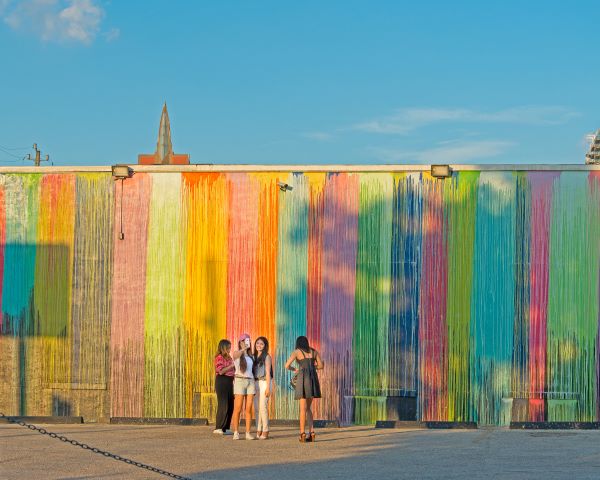 Houston is known internationally as a mecca for both performing and visual arts. “Newstonians” and visitors alike know to head to the Downtown Theater District and the Museum of Fine Arts, Houston for amazing art experiences, but many do not realize just how deep art runs within the city’s culture.

The region is home to hundreds of institutions and local artists dedicated to artistic expression. Houston’s nonprofit arts and culture industry is so robust that it is a large driver for the region’s economy, generating over $1.1 billion in total economic activity.

Here are just some of Houston’s under-the-radar art spaces and experiences to help you begin your journey into the city’s world-class art scene.

The same local art treasure that puts on the world-famous Art Car Parade every spring also offers year-round programming that promotes its mission to educate the public on local visionary folk art.

The Orange Show Monument is an immersive, architectural folk-art piece that includes an oasis, a wishing well, a pond, a stage, a museum and several upper decks. The monument’s creator, Jefferson Davis McKissack, was a local artist and postal worker, who constructed the structure using concrete, brick, steel, as well as objects he found around Houston such as gears, tiles, wagon wheels, mannequins, tractor seats and statuettes.

Learn more about the Orange Show Monument and the Orange Show Center for Visionary Art’s other eclectic art experiences, including Striker Park, a vibrant “art park” and Houston’s famous Beer Can House (yes, a house made of beer cans).

The Contemporary Arts Museum Houston, or the CAMH as locals call it, is dedicated to presenting the best and most exciting international, national, and regional art of our time and documenting its role in our modern society.  “In times of rapid change, artists see the way through. We know that by trusting artists and working to expand their agency in the public realm, meaning will shine through,” Hesse McGraw, Executive Director of the Contemporary Arts Museum explained in his Director’s Note.

As a non-collecting institution, the CAMH hosts six to eight revolving exhibitions each year from internationally recognized artists. Each exhibit is accompanied by a publication, designed for use by scholars, as well as the general public. The museum also hosts lectures, educational programming and events throughout the year.

Houston Center for Contemporary Craft was founded to advance education about the process, product and history of craft, and they do just that by exhibiting works of art that are made of primarily craft materials, including clay, fiber, glass, metal, wood and recycled materials. While strolling through the halls of HCCC you will see the full creative process.

HCCC is also dedicated to giving artists a place to work and create in the artists' studios in the museum’s Resident Artist Hall. The in-house artists share their love of creating with the general public while also educating them on their craft.  "What is so particular to the cultural community of Houston is its incredible richness and depth," said Perry Price, HCCC Executive Director. "Yes, we have world-class encyclopedic art and science museums, a zoo, opera, ballet, and symphony, but we have an abundance of arts organizations large and small, focused and eclectic, well known and yet to be discovered that, when combined, make Houston arguably the most dynamic arts community in the nation. And we are proud that Houston Center for Contemporary Craft is right in the middle of all of it, helping to champion the makers who make our field so compelling and connecting the public with the role of craft in our lives."

Learn more about the HCCC.

The Lawndale is a contemporary art center that engages Houstonians with exhibitions and programs that explore the social issues of our time. Located in Houston’s historic East End, the Lawndale serves as a gathering place to experience art and ideas. Through its exhibitions and The Big Show, an annual area-wide survey show, the Lawndale has introduced many up and coming artists to the wider public.

Learn more about the Lawndale.

The Houston Museum of African American Culture's (HMAAC) mission is “to collect, conserve, explore, interpret and exhibit the material and intellectual culture of Africans and African Americans in Houston, the state of Texas, the southwest and the African Diaspora for current and future generations.” Since opening its doors, the HMAAC has been the most visited African American cultural asset in Houston.

Learn more about the HMAAC.

The Station Museum of Contemporary Art

The Station Museum of Contemporary Art is a forum for local, national and international artists that reflect the cultural diversity of Houston. Through its exhibitions, the museum is committed to showcasing how art plays a critical role in society. The Station also presents film screenings, musical events and lectures that inspire a deeper dialogue and encourages the public to become actively aware of the lives of others.

Learn more about The Station.

Walking around the streets of Houston can be an art experience all its own. Houston is home to a multitude of awe-inspiring murals. While ever-changing and developing, these murals aim to inspire, educate and show love for our beloved Bayou City. Exploring the streets to seek out street art is an excellent way to explore Houston’s vibrant neighborhoods and learn more about the different cultures within the most diverse city in the nation.

Learn more about Houston's arts and culture and what's like to live in the nation's fourth largest city.