How Houston has Evolved to Embrace Multimodal Transportation 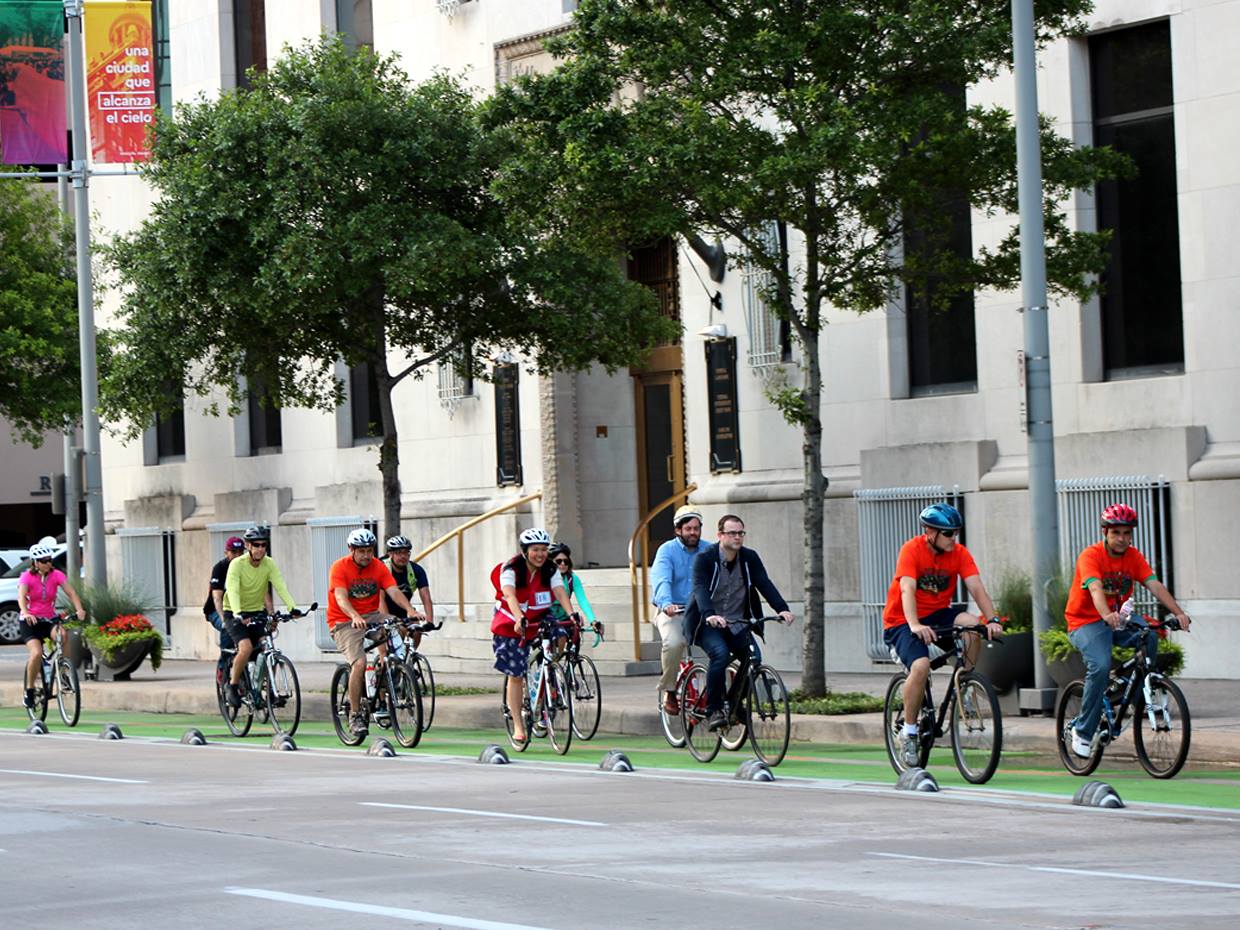 Houston often makes lists of some of the nation’s most sprawling, car-centric metros. But, the city has evolved over the years to include more light rail and other multimodal transportation options as it looks to become more climate-friendly. As of 2021, Houston has more than 400 miles of trails and bike lanes with the goal of constructing a total of 500 miles by 2025. And the city is on track to meet that goal.

As of 2021, Houston has reached 87% of its Resilient Houston goal to build at least 500 miles of high-comfort bikeways or lanes that are safe for all ages, according to Rice University’s Kinder Institute for Urban Research. The Resilience and Recovery Tracker shows the city needs to build at least 16 miles more per year to reach the milestone.

In recent years, the City of Houston, Harris County, nonprofit organizations, the cycling community and other entities have come together to improve Houston’s bike infrastructure and build safer roads for all travelers as the city continues to expand.

Houston BCycle, the city’s bike share program, is celebrating its 10-year anniversary this month. The program, which is operated by nonprofit organization Houston Bike Share, started in 2012 with only three stations downtown and 18 bikes. Today, there are more than 150 stations across Houston and more than 1,100 bikes. The bike share program has seen tremendous growth every year since its founding, growing more than 700% in the last five years, according to the nonprofit.

“The success of the Houston BCycle program is cause for celebration and a great source of pride for the City, and would not be possible without Houston Bike Share,” said Mayor Sylvester Turner in a recent press release. “The City of Houston is committed to making Houston more walkable and connected to biking and transit, and the availability of these bike stations across the city, including in Complete Communities, [which] furthers that commitment and supports our goal to provide equity and accessible multimodal transportation options.”

In 2017, the city adopted the Houston Bike Plan with a goal to create roughly 1,800 miles of high-comfort bikeways with a vision to be a gold-level bicycle-friendly city by 2027. Seven projects have been completed under the plan, in addition to eight that are in the design or construction phase.

Earlier this year, the city announced a $25 million plan to transform Telephone Road between Lawndale Avenue and South Loop 610, an underserved area, with improved sidewalks, protected bike lanes, safer crosswalks and converted traffic lanes. According to Chron.com, the city won a $20.1 million federal grant under the Rebuilding American Infrastructure with Sustainability and Equity program. The goal is to combine the project with two other projects already underway along other stretches of Telephone Road, which “will help create a five-mile multimodal stretch of the thoroughfare between the Hobby area and Houston’s East End when all is done.”

Efforts to create a more bike-friendly city are not going unnoticed. Houston recently ranked 29 out of 50 among the top bike-friendly cities, according to an analysis by Anytime Estimate. Compared to other Texas cities, Houston came second only to Austin.

Despite the significant progress Houston has made, concerning challenges remain. The annual total of cycling deaths has risen each year since 2017 in Harris County except for a slight dip in 2018, according to an analysis of TxDOT roadway crash data by the Houston Chronicle. So far in 2022, 11 people riding bicycles have died compared to last year’s total of 24.

But there are signs that efforts to improve bike infrastructure and safety are working. A Chron.com analysis shows the number of overall cycling crashes has been steadily declining since 2017 except for a slight uptick in 2021.

Learn more about living in Houston.

Correction: A previous version of this story incorrectly stated that Houston had more than 800 miles of trails and bike lanes with the goal of constructing an additional 500 miles by 2025. The correct amount is more than 400 miles with a goal of reaching 500 miles total by 2025.