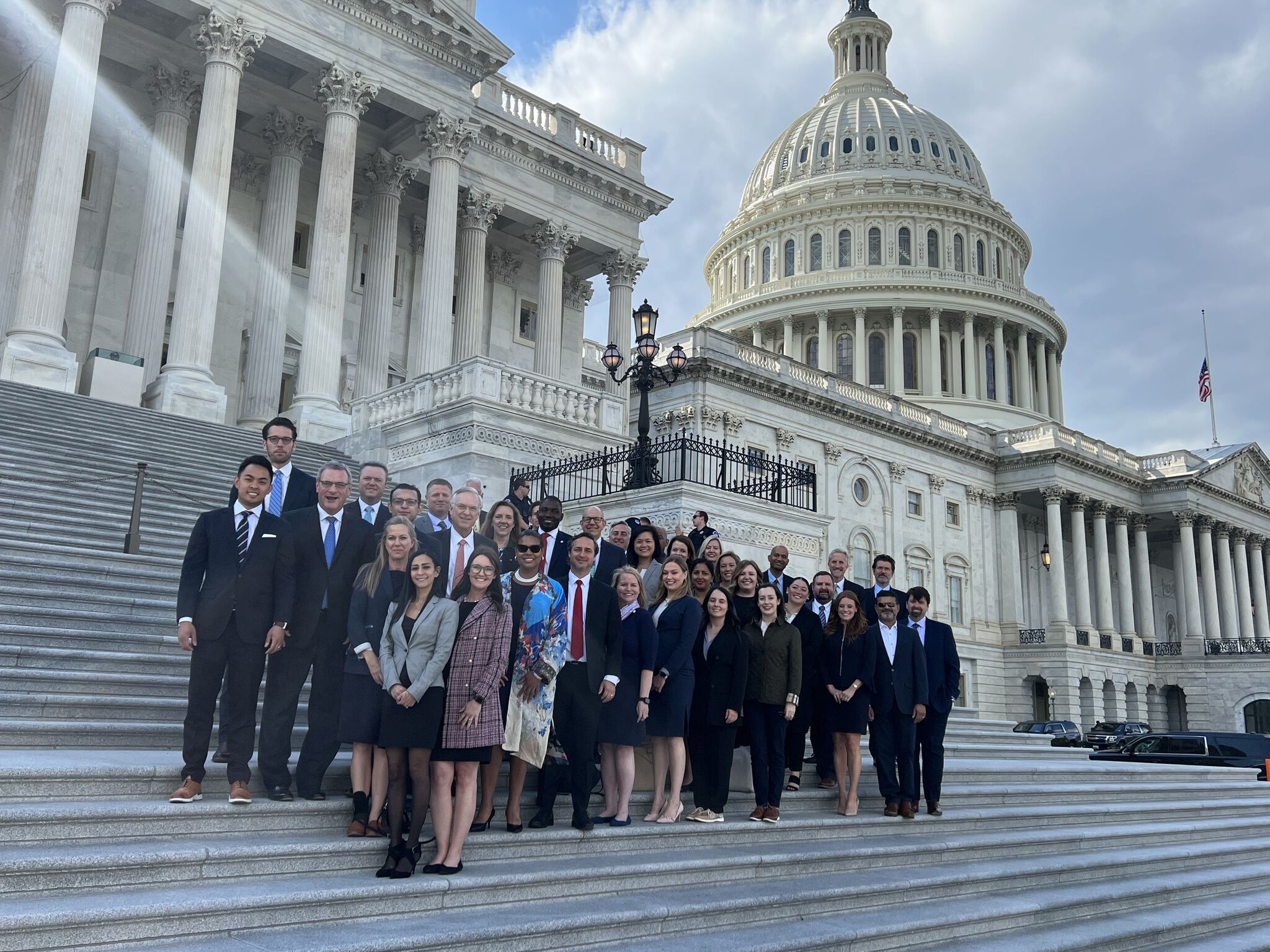 In late April, the Greater Houston Partnership hosted a reputable group of more than 60 business leaders, energy industry experts, and governmental relations professionals in our nation’s capitol to meet with leaders and decision makers working on some of the most important issues facing our nation, state, and region. The 2022 Washington D.C. Fly-In focused on the Houston Energy Transition Initiative and underscored Houston’s position as the Energy Capitol of the World, and the importance of large-scale infrastructure investments for our region, such as the coastal barrier.

The Partnership’s President and CEO, Bob Harvey, and the Partnership’s Public Policy Division successfully facilitated discussions reinforcing the Partnership and its member companies as key resources for policymakers on the global energy transition and infrastructure investments.

Throughout the week, the group met with several members of the Texas Congressional Delegation, the White House and Administration officials, and other stakeholders on issues of energy transition, infrastructure, and the economy.

Photos from the Partnership’s D.C. Fly-In from April 2022 are available here.

The 2022 Washington D.C. trip afforded attendees the opportunity for in-person advocacy and engagement through a series of meetings on Capitol Hill and at the U.S. Chamber of Commerce, which emphasized Houston’s role in leading the world in the low carbon future and strengthening our region for the future.

Washington D.C. Fly-In: By the Numbers:

The 2022 Washington D.C. Fly-In also provided an opportunity for in-person engagement focused on the energy transition. With the launch of the Houston Energy Transition Initiative (HETI), the Partnership and its member companies are pursuing federal policies to create high-quality, high-growth jobs. Leveraging members’ expertise, the Partnership works with lawmakers to advance the region’s energy competitiveness and secure Houston’s position as a leader in the global energy transition.

Working closely with HETI, the Partnership embraces the dual challenge of the energy transition by meeting growing global demand for energy while lowering emissions. There is a tremendous business opportunity in addressing the dual challenge through developing and scaling technologies, creating, and servicing markets for the global energy mix, and investing in energy priorities.

This trip to Capitol Hill further solidified Houston industry as a leader in the energy transition efforts.

Texas as the Best Place to do Business: Texas Tri-City Reception and Dinner

Senator John Cornyn and Senator Ted Cruz joined the Greater Houston Partnership, the Dallas Regional Chamber, the Fort Worth Chamber of Commerce, and the Economic Alliance Houston Port Region at a reception Tuesday evening to kickstart the trip.

Senator Cornyn noted that Texas’ economy is back on track after bipartisan efforts were made to address the negative effects of the pandemic.

Senator Cruz highlighted the importance of job growth, remarking that “if energy is prospering and small businesses are prospering, then Texas is prospering.”

Congresswoman Lizzie Fletcher, a member of the powerful House Committee on Energy and Commerce, highlighted the importance of engagement by Houston’s energy industry and the Partnership as a trusted source of information on the energy transition. Representing the Houston region, Congresswoman Fletcher noted that Houston has the “deep experience and subject matter expertise” to help diversify our energy sources.

The Partnership heard from Congressman John Curtis (R-Utah-03), who chairs the newly formed Conservative Climate Caucus. This climate caucus believes answers can be “found in innovation embraced by the free market,” and that the United States has prevailed as a global leader in reducing emissions to date because “private sector innovation, American resources, and R&D investment has resulted in lower emissions and affordable energy.” See here.

When speaking on the Russian invasion of Ukraine and its impact on European energy, Congressman Curtis emphasized that “permanence” is the key element of Europe’s future energy independence.

Congressman Kevin Brady, Ranking Member of the influential House Ways & Means Committee, thanked the Partnership and its member companies for the continued support over his 25-year tenure on Capitol Hill. Congressman Brady is retiring at the end of 2022, and he noted that he is “more hopeful than ever” in the future of our region and our State.

Congressman August Pfluger, U.S. Representative for Texas's 11th Congressional District encompassing Midland and Odessa, expressed his appreciation for the strong relationship between Houston and his region and highlighted his district’s contribution to Texas’ energy security.

The group heard from Coalter Baker, Deputy Director of the Texas Office of State-Federal Relations, who emphasized the importance of local elected officials and business to remain connected with the Governor’s office as the State works to draw down federal dollars in the Infrastructure Investment and Jobs Act (IIJA).

Throughout the week, the topic of congressional authorization and funding for the U.S. Army Corp of Engineers (Corps) Coastal Texas Study — also referred to the “Coastal Spine” project — arose in the context of infrastructure dollars. The 2022 Water Resources and Development Act (WRDA) provides opportunities to advance navigation, flood damage reduction, and ecosystem restoration projects like the Coastal Spine project, and several members of the Texas delegation expressed their support for the project and its necessary funding.

Overall, the 2022 Washington, D.C. Fly-In provided our member companies with a unique opportunity to engage with the Members of Congress and federal agency officials, as well as business leaders, stakeholders, and decision makers working on our top regional issues. These important discussions advance Houston’s energy competitiveness and secure our region’s position as a leader in the global energy transition, and ensure continued infrastructure investments to our state and region.