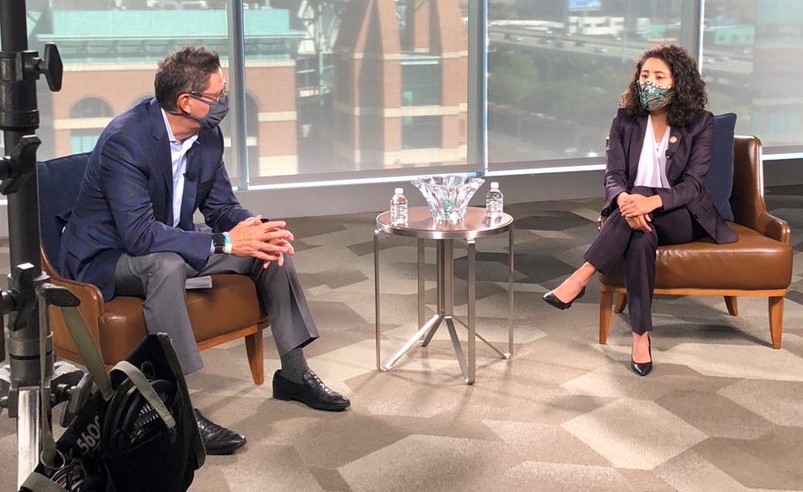 Harris County Judge Lina Hidalgo expressed concern about the rising number of COVID-19 cases in the region and discussed a number of measures the county has implemented to combat the virus’ impact on residents in her 2020 State of the County presentation.

Judge Hidalgo participated in a fireside chat on November 12 with Scott McClelland, President of H-E-B Food and Drug and the Greater Houston Partnership’s 2019 Board Chair. The Partnership hosted the Judge for her second State of the County event, which was held virtually.

“The impacts on our community from the coronavirus are enormous and they’re nowhere near over,” said Judge Hidalgo, citing a rising number of daily new cases as well as increased positivity rates and hospitalizations in the county.

The Judge called on state officials to institute a more stringent threshold-based system for triggering shutdowns if the situation does not improve. She said the economic impact of allowing the virus to spread unchecked would be far more damaging than temporary shutdowns.

“When folks know that it’s safer out there, they’ll have the confidence to go out and engage in the activity that will help our economy to rebound.”

In recent months, the county has launched a $40 million recovery fund for struggling small businesses and a separate $40 million fund to provide rental assistance to tenants affected by the economic downturn.

Judge Hidalgo also discussed Harris County’s work to help close the digital divide, particularly for students who need devices and connectivity for remote learning. In the spring, the county invested about $30 million to ensure every child who needed a device could get one.

The Judge also touched on the county’s bail reform efforts and the positive data that has come out of that reform. Switching to infrastructure, Judge Hidalgo emphasized the importance of widening and deepening the Houston Ship Channel, which will enable the Port of Houston to host ever-larger vessels and effectively compete with other ports along the Gulf Coast.

Watch the full State of the County presentation via the link on this page.

Houston's aerospace industry continues to flourish despiteÂ an economically challenging year. Amid key developments is the region's expanding commercial space sector.Â  To learn more about what's happening in Houston's aerospace industry, we asked Josh Davis to share his observations.Â Davis is the Partnershipâs Senior Director for Global Aerospace & Aviation. AÂ Certified Economic Developer (CEcD), Davis has used his acumen in aerospace to tout Houstonâs strengths as a space juggernaut to a global audience. HisÂ expertise includes research, project development,Â site selection, economic development strategy andÂ global engagement. What are some of the current trends you are seeing and how do you see the Houston region well positioned to lead?Â  The Houston region is positioned like no other metro globally. Aerospace is cross-pollinating with life science and Energy 2.0 in the region like nowhere else in the world. Specifically, the Houston region is home to a number of exciting companies doing new work in space, including: Axiom Space Intuitive Machines Ad Astra Rocket Boeing We're seeing companies that have traditionally associated with oil and gas shift into aerospace, including Jacobs and KBR.Â There's a realizationÂ that space is the future. Houston isÂ home to many institutions in the region supporting theÂ space ecosystem, such as NASA's Johnson Space Center, Rice Space Institute, the Houston Spaceport, Space Center Houston, Texas Medical Center, and San Jacinto College Edge Center. We've alsoÂ seen increasing interest from our regional economic development allies around aerospace projects. There are more than 500 aerospace, space, and aviation firms and supporting institutions in the Houston region. We're alsoÂ seeing growth in interest around venture capital as it supports space in the Houston region. Houston Exponential (HX) has engaged in this space in 2020, and VCs such as Houston-based SpaceFund have helped to ignite the conversation along with others in the region. This year, the Partnership supported TheÂ Ion in awardingÂ a $1.4 million grant from the Minority Business Development Agency to create an Aerospace Innovation Hub (ASCI-Hub).Â  There's also an emergence of a new network of global cross-pollination brought to us by the space industry. Last year, the Partnership attended the Paris and Dubai air shows and helped bring a delegation from the UAE to the Houston Spaceport. As a global city with about 90 consulates, Houston'sÂ international nature is our greatest strength and catalyst within the aerospace, life science, and energy dynamic.Â  The COVID-19 pandemic has caused a serious disruption in economies across the globe. What kind of impact has it had on aerospace andÂ aviation? Aerospace is currently a tale of two industries. One one hand, you have aerospace companies that exclusively support and supply commercial aviation. On the other, there areÂ aerospace companies engaged in space and related arenas. The former has been hit with unprecedented challenges as COVID-19 had brought air travel to a near standstill in 2020. At one point, the Houston Airport System was down more than 90%.Â Mario Diaz, Aviation Director for the Houston Airport System, spoke about those challenges and how the region's airports have adapted at the Partnership's State of the Airports event in October.Â  The commercial space industry meanwhile is booming.Â Recent successes, including SpaceXâs Demo-2 and Crew-1, have captured the global imagination. Earlier this year, Axiom Space announcedÂ it was selected by NASAÂ to build a privately funded platform that will attach to the International Space Station. The $2 billion project could create up to 1,000 jobs.Â The company expects to launch its first module as soon as 2024. Space companies have not only defied the gravity of COVID-19, but have also found new innovative solutions to combat the virus. The convergence of life science and space in Houston lends itself to this kind of novel solution finding.Â  Are there any promising new technologies or opportunities in the aerospace industry that you think will change space exploration and life on Earth? Every dollar spent on spaceÂ has implications for making life better for all of us. We are finding there are many implications for life science in a zero gravity environment. During the Partnershipâs Washington D.C. Fly-In earlier this year,Â we met with NASA Administrator Jim Bridenstine, a Rice University alumnus, who highlighted the potential to grow human retinas in space. For instance, the zero gravity environment allows for symmetrical structures to unfold -a feat not possible on earth. We will find there is no area of life science where space does not offer insights and new possibilities. All NASA astronauts and many from other space agencies train at NASA JSC. Houston is the human spaceflight capital of the world and we have the largest medical center in the world. This is a recipe for possibility this decade.Â  On the spaceflight side synergizing with energy, propulsion is the holy grail for the industry. Just one example in the Houston region is Ad Astra Rocket Company, which is working on advanced high-power electric propulsion. In the current space economy, there are two main kinds of rockets: the high-power chemical rockets (launchers) and the low-power electric ion engines. Ad Astra takes the best of both, with a high-power electric rocket engine which is the ideal propulsion solution for many different space missions and logistics/servicing operations.Â  Â  Learn more about Houston's aerospace and aviation industries. Register for the Partnership's State of Space event for Dec. 15, 2020.Â
Read More

Is Greater Houston Getting a Fair Cut of Higher Education Funding?

Colleges and universities draw funds from various sources to sustain their operations, but itâs the state funding that often receives the most attention due to the complexities of the funding formula and the percentage of the funds provided. Unique to Texas is the distinction between institutions receiving dollars from the Permanent University Fund (PUF) and the Higher Education Fund (HEF), which helps explain why we see funding disparities among public higher education institutions in Texas. Â  The PUF is a constitutionally established public endowment dating back to 1876, supported by land grants previously appropriated to the University of Texas (UT), plus an additional 2.1 million acres located in West Texas. The land produces two lines of incomeâsurface and mineral. A designated percentage of the PUF income is placed into the Annual University Fund (AUF) for the support of the UT System and the Texas A&M University (TAMU) System.Â The UT System receives two-thirds of the AUF while the TAMU System receives the remaining one-third. The estimated value of the PUF for the 2018-19 biennium was $22.8 billion with $1.8 billion distributed to the AUF. Â  Â  The HEF was later established in 1984 by constitutional amendment as a counterpart to the PUF for Texas public institutions of higher education that are ineligible for drawing down funds from the AUF.Â The Constitution requires annual appropriations for the HEF until the corpus reaches $2 billion dollars, at which time 10% of any investment income will be added back to the fund as part of the corpus and appropriations will cease. The estimated value of the HEF funds for the 2018-19 biennium was $787.5 million.Â  Â  Both the HEF and the PUF allocation (to the AUF) may be used to acquire land; construct, equip, repair, or rehabilitate buildings; and acquire capital equipment and library books and materials. Institutions may also use a portion of their funds to make debt service payments on authorized bonds. However, income from the PUF may also be used for support and maintenance of university programs at certain institutions; whereas, HEF funds may not. There are currently 22 HEF institutions statewide, including 5 in the Houston area, compared to 5 PUF Excellence institutions and 11 PUF-Debt Service Institutions statewide. Â  The sheer value of the PUF, the broader acceptable uses, and the fewer number of institutions with access to the funds have created a disparity in funding for HEF institutions, including those serving the Houston region. With an eye toward ensuring Houston higher education institutions have the same advantages as all other public universities in the state, the Partnership has launched the Greater Houston HUB (Higher Education United with Business). The HUB will serve as a platform to develop a better understand of the challenges facing the institutions and the needs of the business community; to find common areas for collaboration; and build awareness to address funding disparities.Â  Â  To learn more about the Greater Houston HUB, click here. Connect with the Partnership's higher education policy team, Tiffani Tatum.
Read More