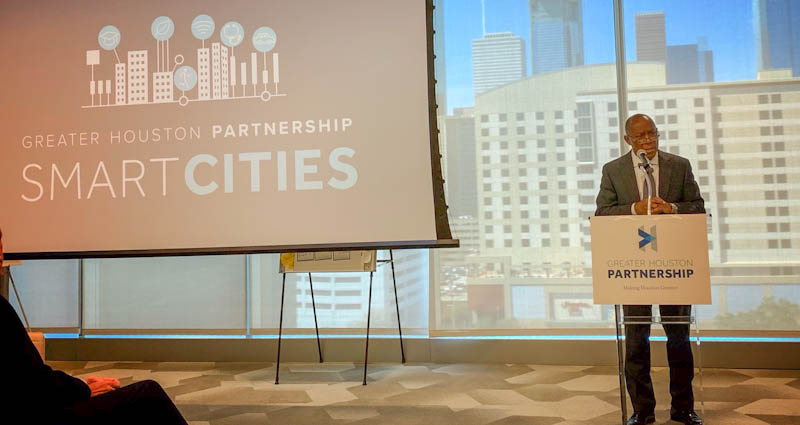 Mayor Sylvester Turner established a Smart City Advisory Council this week comprised of city and regional partners. The council was announced at a smart city planning workshop hosted by the Greater Houston Partnership.

The advisory council is charged with engaging community stakeholders, governments, academia and industry to develop a roadmap that will speed the adoption of technology and data-driven practices in the public realm. The planning workshop held on March 7 was facilitated by Amy Chronis, chair of the Partnership's Sustainability Advisory Committee and Houston managing partner with Deloitte.

A Smart City is one that uses data and emerging technologies to improve the quality of life for citizens, share information with the public, drive economic growth and build a more inclusive society. Governments and utilities across the globe are leveraging technologies such as Internet of Things (IoT), artificial intelligence, digital services, advanced mobility and drones to improve citizens’ lives and solve the challenges of today while preparing to address those of tomorrow.

The Advisory Council will include representatives from public and private entities and will be chaired by Elizabeth Brock, director of external engagement for CenterPoint Energy.

The primary aim of the Advisory Council is to establish a roadmap of strategies, processes and standards to drive Houston’s Smart City efforts forward. The council will seek to align the roadmap to the Resilience Strategy the City is currently developing as a member of 100 Resilient Cities – pioneered by the Rockefeller Foundation.

Marissa Aho, the newly-appointed Chief Resilience Officer for the City of Houston, said “Technology is a great enabler for resilience but can also pose a significant risk as society becomes more technology-dependent. The Smart City Advisory Council will help the City leverage technology to its maximum resilience benefits while minimizing risk.”

Houston has been a pioneer in the usage of Smart City technology and recently launched a Smart City webpage to showcase many of the projects underway.  These efforts and others led Smart Cities Dive, a government technologies publication, to declare Mayor Sylvester Turner the 2018 Leader of the Year.

The City is also considered a flagship city by partnering with Microsoft - for the Microsoft Innovation Alliance initiative, and Verizon - which made Houston home to the first 5G implementation in the nation.

This announcement comes amidst growing momentum in Houston’s burgeoning technology and innovation ecosystem.

“The age of technology is here and we cannot afford to sit idle,” Turner said. “We must leap, not stroll into the future. The advisory council will set the stage for Houston to become the Smart City of the world.”