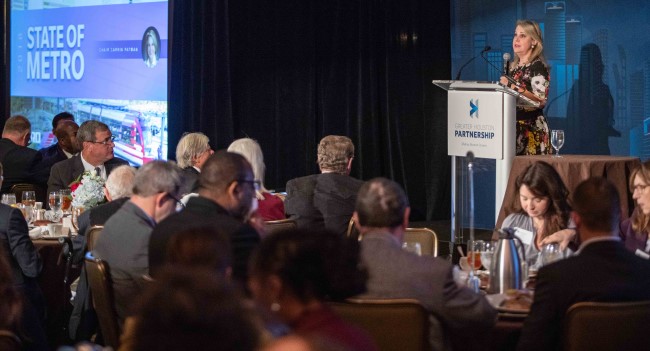 America's 4th largest city added nearly a million residents to its population in the last seven years, so if you're feeling a bit cramped, chances are you are not alone. And because growth seems to show no signs of slowing down, aggressive investment in infrastructure and public transportation is essential for our region.

This weekend METRO Houston begins meeting with the public on their newly released METRONEXT Moving Forward Plan. These meetings precede an expected November bond election where voters will be asked to approve bonding to help fund projects spanning 20 years. The bond amount is still to be determined by METRO's Board. A portion of the funding is anticipated to come from federal sources. The total price of the current draft transit plan is $7.5 billion.

The plan is "aggressive but feasible" said Chairwoman Carrin Patman to local lawmakers and engineers at the Partnership's State of Metro event in December. The new transit plan will be presented to Houstonians in 17 public meetings before the proposal is voted on in November 2019 alongside the mayoral election.

Highlights from the plan include upgrades for those traveling to the airport. One out of four new light rail extensions will connect to Hobby Airport, and one of the five new Bus Rapid Transit (BRT) systems will expedite trips to Bush International Airport. The proposal also prioritizes the creation of two-way HOV lanes to increase Park and Ride efficiencies and limit stoppage time caused by HOV lane accidents. To learn more about how this plan affects you or your community, attend one of the 17 planned public meetings or visit http://metronext.org for more information.