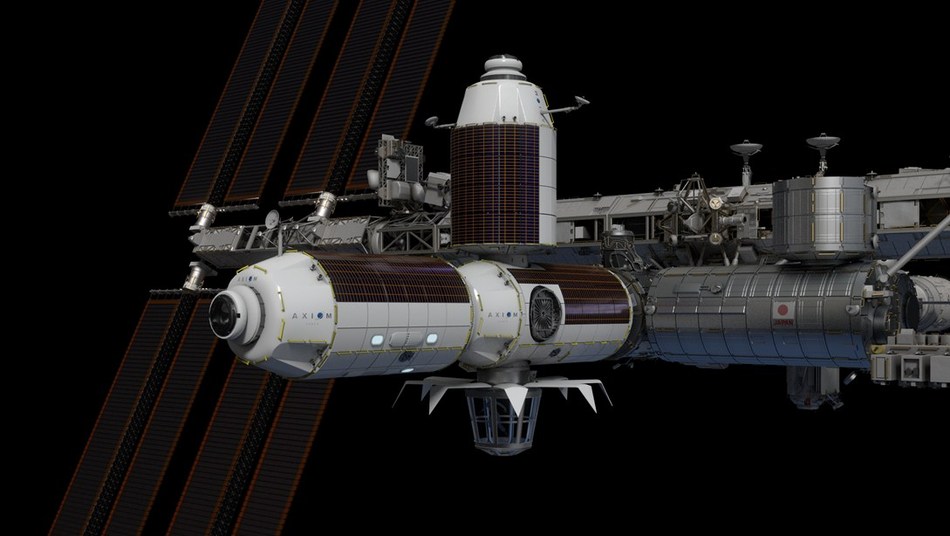 A rendering of the Axiom platform attached to the ISS

NASA has selected Houston-based Axiom Space to build a privately funded platform that will attach to the International Space Station. The project is a major move in the effort to maintain humans’ presence in outer space and could pave the way for a future commercial space station.

Axiom is partnering with Boeing and other contractors on the project that could cost $2 billion and create approximately 1,000 jobs. The company expects to launch its first module as soon as 2024.

NASA began soliciting proposals in June for companies to join a public-private partnership to develop and demonstrate technologies for a future commercial space station. It’s the space agency’s latest effort to create a bridge between its work and the private sector, bringing more commercial companies into the NASA orbit.

“Axiom’s work to develop a commercial destination in space is a critical step for NASA to meet its long-term needs for astronaut training, scientific research, and technology demonstrations in low Earth orbit,” said NASA Administrator Jim Bridenstine. “We are transforming the way NASA works with industry to benefit the global economy and advance space exploration. It is a similar partnership that this year will return the capability of American astronauts to launch to the space station on American rockets from American soil.”

The Axiom commercial platform is likely to include a node module, an orbital research and manufacturing facility, a crew habitat, and a “large-windowed Earth observatory” said to be similar in appearance to the International Space Station’s cupola module. The new segment will add more research and habitation facilities to the ISS.

Axiom’s founders are space entrepreneur Kam Ghaffarian and Michael Suffredini, who served as NASA’s space station program manager from 2005 to 2015.

“Axiom exists to provide the infrastructure in space for a variety of users to conduct research, discover new technologies, test systems for exploration of the moon and Mars, manufacture superior products for use in orbit and on the ground, and ultimately improve life back on Earth,” Suffredini said. “As we build on the legacy and foundation established by the ISS program, we look forward to working with NASA and the ecosystem of current and future international partners on this seminal effort.”

As the home of NASA's Johnson Space Center (JSC), Houston has been the epicenter of human space exploration for nearly six decades. Every manned U.S. space mission since 1961 has been planned and executed from Houston and for nearly 20 years JSC's Mission Control has served as the control facility for the U.S. segment of the International Space Station. JSC manages an annual budget of roughly $4.6 billion in contracts, grants, payroll and recruitment.

Houston is currently home to more than 250 companies involved in aircraft or space vehicle manufacturing, research and technology. Of the 50 largest aersopace manufacturing companies in the country, 32 have a presence in the Houston region.

Learn more about the Axiom announcement from the Houston Chronicle.

A new reportÂ rankedÂ Houston No. 19 among the top 100 emerging ecosystems in the world.Â  Global Startup Ecosystem Report 2021, produced by Startup Genome and the Global Entrepreneurship Network, considered ecosystems that are at earlier growth stages and who have high potential to be global top performers in the coming years.Â Houston was the fourth-highest U.S. city on the list, only behind Miami, Detroit and Portland. The report also ranked Houston No. 4 in Top Regional Challengers of North America.Â  As InnovationMap reports, Houston climbed up in this year's rankings compared to the same report last year, which lumped Houston in the 31-40 range with other emerging ecosystems.Â  The findings further underscore the region's momentum as one of the country's leading next-generation tech hubs.Â  According to a recent Partnership analysis of venture capital, VC funding has remainedÂ strong with $373.1 million raised in Q2/21, up from $166.8 million from the same period last year. Companies raised $1.261 billion over four quarters ending in Q2/21 - a record high for a four-quarter span. HighRadius, Axiom Space and Preventice Solutions made up the three largest deals of the past year, accounting for over $500 million in funding.Â  Read theÂ Global Startup Ecosystem Report 2021. See the Q2/21 quarterly venture capital update.
Read More