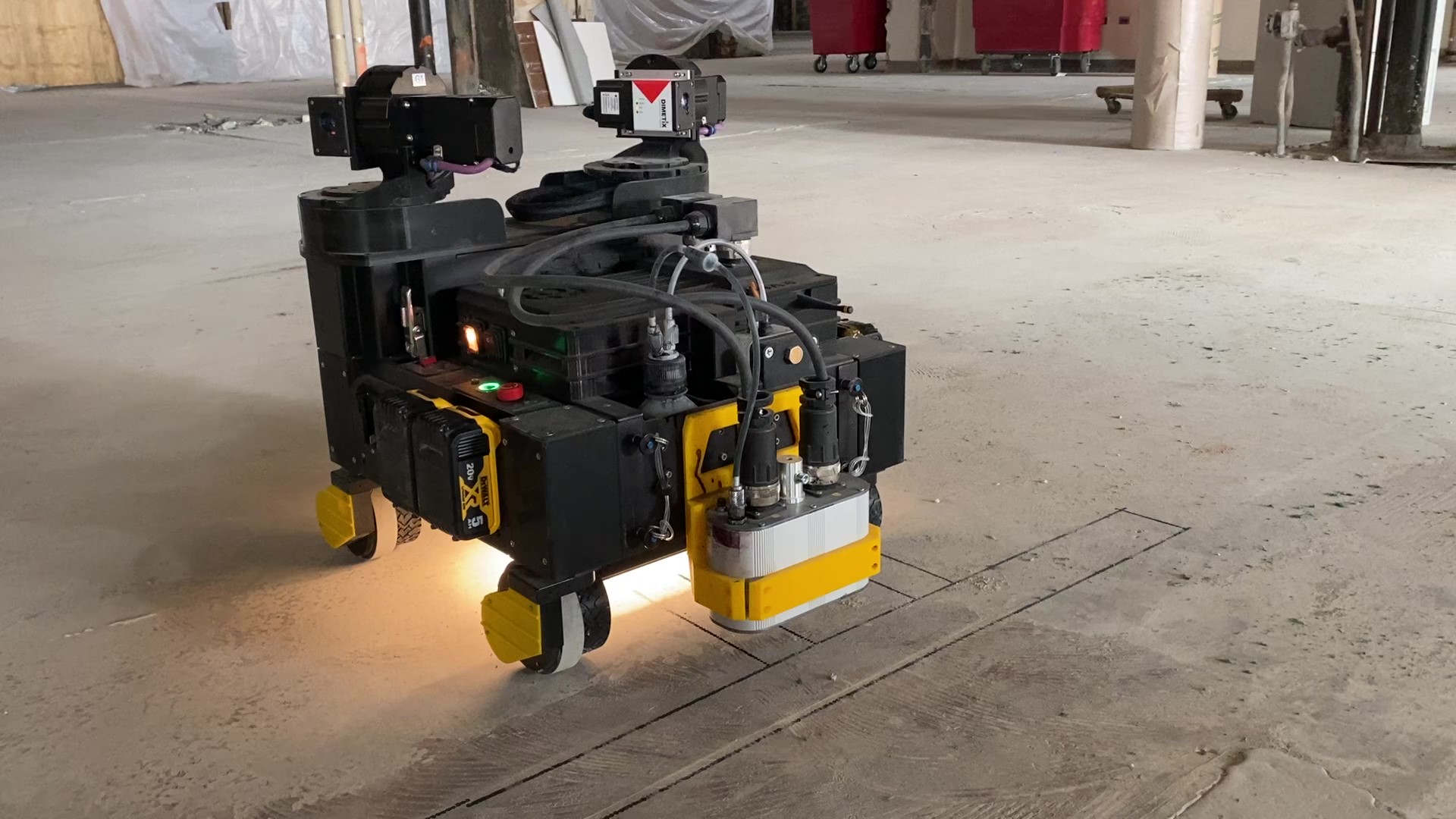 An autonomous rover dubbed the “layout Roomba” that marks architectural and engineering designs directly onto unfinished concrete floors is one of many examples of the innovation happening in Houston’s advanced manufacturing sector. The city boasts a thriving tech ecosystem and is considered a global manufacturing powerhouse due to its central geographic location, unparalleled infrastructure and talented workforce.

Funding is now flowing into Houston to help drive the next wave of manufacturing innovation. According to the Partnership’s 2022 Houston Tech Report, more than 900 investors have funded over 1,500 venture capital transactions in the Houston region over the last five years. Data shows that 8.6% of all VC deals are funding manufacturing projects with another 8.7% funding AI and machine learning ventures.

“I think Houston is a great place to start a company. It hosts a diverse pool of exceptional talent, a reasonable cost of living and a welcoming start-up community,” said Derrick Morse, CEO and founder of Rugged Robotics. “Houston is also home to a number of innovative companies that solve really hard and really important problems.”

“By focusing on the problem, and by developing a practical solution, we’ve unlocked a very exciting opportunity” Morse said.

Rugged Robotics is operating out of the East End Maker Hub, a makerspace and manufacturing center in Houston’s East End. Morse said it was a no-brainer to choose the incubator as they started growing.

“The East End Maker Hub was initially attractive for two reasons,” Morse said.  “First, access to the machine tools and rapid prototyping equipment we were familiar with at TXRX, and second, flexibility.” He added that the flexibility of the leases allows the company to move into bigger spaces as they evolve.

Next month will mark a year since the $38 million innovation hub opened. Urban Partnerships Community Development Corporation says the facility is 95% occupied with 49 tenants from candle making to biotech/manufacturing, a sign of a successful first year. The East End Maker Hub aims to create 1,000 new companies over the next five years to boost Houston’s advanced manufacturing jobs. Houston has one of the largest manufacturing workforces in the country with more than 213,100 workers, but it declined by 8.6% between 2015 and 2020, according to the Partnership’s analysis.

“We've retained or created over 330 jobs thus far and aim for 500 in the coming years. We're a model for how to use public funding to jump start development to support the entrepreneurial ecosystem,” said Natasha Azizi, Executive Director of UP CDC and East End Maker Hub.

The East End Maker Hub is part of several landmark projects to position Houston as a national leader in tech innovation.  According to the Houston Tech Report, venture capital investments have grown
from $423 million in 2017 to $2.02 billion in 2021, a near five-fold increase and an unprecedented 47.4% growth rate per year.

“We’ve built an amazing foundation, and I’m excited by the road ahead.  Our team is truly inspiring.  I can’t wait to see what we’re capable of,” Morse said.

Houston’s Greater Northside is home to a lot of gems, including Instagram-worthy scenes, diverse cuisine, historic neighborhoods, parks and trails and the iconic Houston Farmers Market. The Partnership recently spent the day with the Greater Northside Management District to explore what their area has to offer.  "We are Houston at the core" The district focuses on promoting economic development, improving the quality of life for commercial and residential property owners and creating opportunities for new development. It encompasses more than 24 square miles north of downtown Houston. The vastness of the district means it serves a diverse population. From historic neighborhoods like Lindale Park and Woodland Heights to emerging ones like Hardy Yards, the district offers something for everyone.  “We are Houston at the core. Reflecting the diversity of the city,” said Rebecca Reyna, Executive Director of GNMD.  Certain neighborhoods on the south side of the district are considered some of the oldest in Houston, established in the 1880sand settled primarily by immigrants from central and southern Europe. Today, you’ll find a mostly Hispanic population, which is once again transforming as more people move into the district. Reyna said character and prime location are what draw people to the area. “I’ve noticed people moving here want to keep the character and they’re getting involved in their community,” she said. The district is easily accessible via the Hardy Toll Road, Loop 610, I-45, I-10 and I-69, allowing drivers to get to most parts of the city within roughly 20 minutes. The METRORail Red Line also provides service to the district and there are more than 10 Bcycle stations in the area. The district is covered with public art murals, many designed by Houston artists, including Gelson Lemus, better known as W3r3on3.         View this post on Instagram                       A post shared by W3r3on3 insomniaks krew (@w3r3on3)   The Business Community and Projects on the Horizon The GNMD is home to more than 10,000 businesses, more than 5,000 commercial, retail and industrial properties and more than 150 restaurants. Conceptual rendering of Meow Wolf at former Moncrief Lenoir buildings. (Courtesy: The Deal Company/E-Studio Group) Conceptual rendering of courtyard at Moncrief Lenoir buildings (Courtesy: The Deal Company/E-Studio Group)                 Conceptual rendering of Moncrief Lenoir buildings. (Courtesy: The Deal Company/E-Studio Group) Conceptual rendering of media venue at Moncrief Lenoir buildings. (Courtesy: The Deal Company/E-Studio Group) Reyna said there are many exciting developments underway or on the horizon, including the redevelopment of the historic Moncrief Lenoir Manufacturing Company buildings across the street from Saint Arnold Brewing Company. According to developer DealCo, Meow Wolf will be the anchor tenant of the 120,000-square-foot mixed-use space, offering restaurants, event space, artist studios and galleries, creative workspace, loft offices and more. Meow Wolf, an immersive art experience, is expected to open its Houston “portal” in 2024. A 10-acre tract of land in Hardy Yards, owned by the city, will be developed into affordable single-family homes with commercial and multi-family housing along North Main Street. Reyna is also excited about a $6 million project to reconstruct Quitman Street from Houston Avenue to Elysian Street to add sidewalks, lighting, bike lanes and more. Some of the notable businesses and restaurants located across the district include: Saint Arnold Brewing Company Spanish Flower El Bolillo Bakery Pinkerton’s Barbecue Teotihuacan Mexican Café (original location) Houston Farmers Market White Oak Music Hall Houston Foam Plastics A few hidden gems: Granel Spice Market Houston Dairymaids Big Owl Craft Brew House Gerardo’s Butterfly Pocket Park Great view of downtown Houston from White Oak Bayou Greenway Bike Trailhead near Henry and South Streets Learn more about living and working in Houston.
Read More

Houston climbed six spots on this year’s list of America’s Best Cities, buoyed by attributes like its diversity, culture and economic development performance.  America’s Best Cities is a competitive annual ranking put together by the international consulting firm Resonance Consultancy. The 2022 report places Houston at No. 11 in the U.S. Across individual categories, the region ranks No. 7 for culture and No. 4 in both economic development and restaurants.  The report also credits Houston’s concentration of 24 Fortune 500 companies and overall livability for stirring “global curiosity.”  "Houston is a diverse and vibrant metro where individuals can start a family, grow their business, attend world-class institutions and universities, or be immersed in the 145 languages that are spoken by our residents,” Houston Mayor Sylvester Turner said in release. The Houston region is home to more than 7.2 million residents, an increase of 1.3 million since 2010. The metro has also added roughly 750,000 jobs over that 12-year period. Learn more about why companies and individuals are choosing to move to Houston.
Read More