The Greater Houston Partnership hosted its 2019 Annual Meeting on Thursday, January 31, with more than 1,200 members in attendance at the Marriott Marquis in downtown Houston. Presentation slides from the event may be found here and here is a link to the full event video.

At the meeting, the organization honored outgoing chair, Marc Watts, who discussed the organization’s key work in 2018 including efforts around flood resiliency, public education, and building a thriving innovation ecosystem. The organization also celebrated its 30th Anniversary with a commemorative video and welcomed back a number of former chairs and executive staff as part of the festivities.

For a full look at the Partnership's accomplishments in 2018, view the annual report. And see the sponsors who helped make the event possible.

The Partnership’s 2019 Chair Scott McClelland offered inspiring remarks regarding the importance of a strong public education system as key to Houston’s long-term success.

“Houston’s human capital is the greatest asset the region possesses, and a strong, diverse economy relies on creating opportunity for all residents to improve their lives,” said McClelland. “A well-funded and effective public education system is critical to generating opportunity for our residents. Ensuring a path toward public education reform and securing flood mitigation funds are the Partnership’s two main legislative priorities in 2019.”

McClelland challenged the attendees to engage in the work of the Partnership in the coming year. “We need you to play a role. It will make you a better person and it will help us make Houston even greater,” he said.

In his formal remarks, Partnership President and CEO Bob Harvey shared details of a new strategic plan that will guide the organization’s overall efforts through the next decade. The initiative, dubbed Houston Next, is designed to advance Houston’s position as a great global city.

“We have much to be proud of and by every measure we are already a great city,” said Harvey. “But we also know that the world around us is changing rapidly, and I dare say the pecking order of global cities for the remainder of the 21st Century is being worked out right now.  There are no givens and we are not assured a place near the top. This plan is our guide to helping perpetuate this region’s positive trajectory.”

The plan focuses on three core areas: creating a strong and diverse economy, ensuring a great quality of life and supporting opportunity for all. The plan is designed to empower local business leaders to accelerate the region’s progress at the intersection of those three areas of impact and ensure Houston’s continued success.  More information on the strategic plan is provided below.

For information regarding the Houston Next capital campaign, please contact Jenny Dudley, jdudley@Houston.org or 713-844-3672. 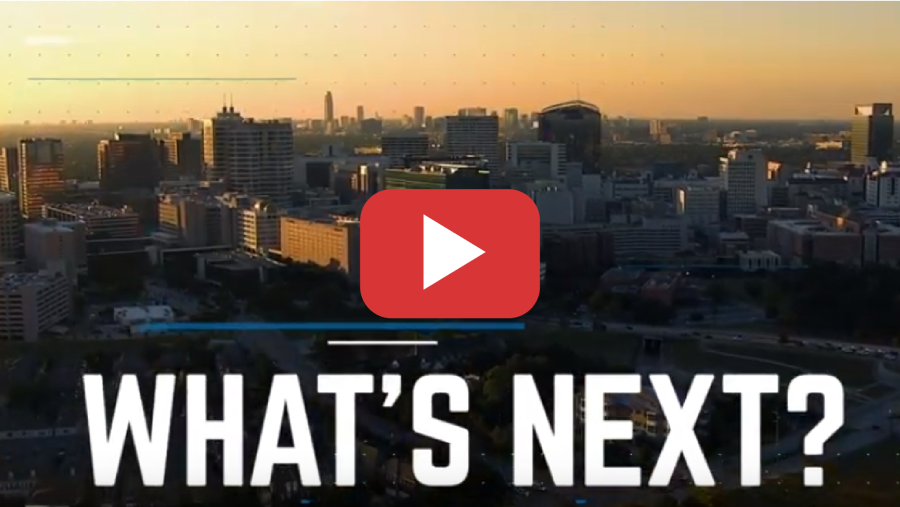 Quality of Life
Houston has made tremendous strides in improving the overall quality of life in the region over the last decade, in large part through investments in public spaces and the arts. However, challenges and opportunities remain that require the Partnership to lead and accelerate progress, including flood mitigation and resilience, transportation infrastructure and increasing government efficiency and effectiveness. Through Houston Next, the Partnership will establish a center of excellence for long-term flood mitigation, collaborate with regional stakeholders in developing a 21st-century mobility plan and engage with the public around these issues through awareness campaigns, polling and other outreach.

Opportunity for All
The opportunity for all Houstonians to succeed is dependent on strong education systems and career pathways. The Partnership will focus on advocating for a high-quality, properly funded public education system, while also working with partners across the region to ensure local colleges and universities are producing graduates aligned with the needs of Houston businesses. The Partnership will also work with an outside consultant to take the efforts around its highly-successful, industry-led workforce development initiative, UpSkill Houston, to the next level.

Bayou Business Download: How Many Jobs Will Houston Create in 2022?

In this episode of Bayou Business Download, we look at the what 2022 has in store for the Houston region with Partnership Senior Vice President of Research Patrick Jankowski.Â  Key topics include:Â  The employment forecast for 2022 in HoustonÂ  The factors impacting specific sectorsÂ  What is likely to drive growth both at the local and national levelÂ  Some of the forces that could derail the region's ongoing recoveryÂ  Read the 2022 Employment Forecast here.Â
Read More

Houston Expected to Create 75,000+ Jobs in '22 as Region Works to Regain Pandemic Losses

HOUSTON (December 1,2021) â The Greater Houston Partnership forecasts the Houston region will create 75,500 net new jobs in 2022. As the regionâs economic recovery continues, employment gains are expected in every sector, with the greatest increases anticipated in administrative support and waste management; government; health care and social assistance; and professional, scientific and technical services.Â  Five factors will support job growth in the region next year: the ongoing U.S. expansion, robust global trade, energy consumption returning to pre-crisis levels, pent-up consumer demand, and local population growth. The dynamics affecting each are broken down in the report. The forecast warns that the recovery will continue to face headwinds, including elevated inflation, supply chain challenges and worker shortages, but these wonât be enough to halt growth.Â  As of September 2021, Metro Houston had recouped 245,600 jobs, or roughly 68 percent of the 361,400 lost in the early stages of the pandemic. The sectors most impacted by social distancing are near full recovery. Restaurants and bars have recouped 90.1 percent of their losses, retail 86.5 percent, other services (i.e., personal services), 94.0 percent. However, for the industries that were struggling prior to the pandemicâincluding energy, manufacturing, construction, and wholesale tradeâCOVID-19 made their situations worse. Those sectors began to shed jobs before COVID-19 arrived and continued to shed them after the economy reopened. Collectively, these struggling Houston industries account for over half the jobs needed to close the gap and recapture Houstonâs pre-pandemic employment peak. Partnership Senior Vice President of Research Patrick Jankowski said the good news is that the outlook for the four sectors has improved in recent months and theyâre taking small steps toward recouping their losses.Â  âOnly eight times in the past 21 years has annual growth exceeded 75,500 jobs, which is our forecast for 2022,â Jankowski said. âThose eight years tend to coincide with rising oil prices or prices at an unsustainably high level. Factor out the booms (and the busts), and metro Houston typically creates 65,000 to 70,000 jobs in a ânormalâ year. Measured against that, 2022 looks to be one of the better years for job growth in Houston.âÂ  Metro Houston Jobs Forecast by Sector (December 2021 to December 2022)Â  Administrative Support/Waste Management: +9,000 jobsÂ  Professional, Scientific and Technical Services: +8,700 jobsÂ  Health Care and Social Assistance: +8,400 jobsÂ  Restaurants and Bars: +7,200 jobsÂ  Government: +7,100 jobsÂ  Transportation, Warehousing and Utilities: +6,500 jobsÂ  Manufacturing: +5,000 jobsÂ  Energy: +4,000 jobsÂ  Wholesale Trade: +3,000 jobsÂ  Construction: +2,700 jobsÂ  Other Services: +2,100 jobsÂ  Finance and Insurance: +2,100 jobsÂ  Educational Services: +2,000 jobsÂ  Retail Trade: +2,000 jobsÂ  Real Estate and Equipment Rentals: +2,000 jobsÂ  Arts, Entertainment and Recreation: +1,600 jobsÂ  Hotels: +1,200 jobsÂ  Information: +700 jobsÂ  Click here to see the full report, including a sector-by-sector examination of the factors that will prompt growth in the year ahead.Â  The mission of the Partnership is to make Houston one of the worldâs best places to live, work and build a business. To that end, the Partnership provides this forecast to help the Houston business community and those involved in economic development in the region understand trends influencing the regionâs economy and driving industry gains or losses. The forecast is designed to help businesses make better investment, staffing and purchase decisions in the coming year. ### Greater Houston Partnership The Greater Houston Partnership works to make Houston one of the best places to live, work and build a business. As the principal business organization in the Houston region, the Partnership advances growth across 12 counties by bringing together business and civic-minded leaders who are dedicated to the areaâs long-term success. Representing more than 900 member organizations who employ approximately one-fifth of the regionâs workforce, the Partnership is the place business leaders come together to make an impact. Learn more at Houston.org. A.J. Mistretta Vice President, Communications Â  Â  Â  Â Â  (c) 504-450-3516 | amistretta@houston.org Â
Read More

With more than 250,000 veterans in residence, Houston has the country's second highest veteran population. Veterans are a diverse, highly skilled talent population that can bring valuable experience to a workplace…