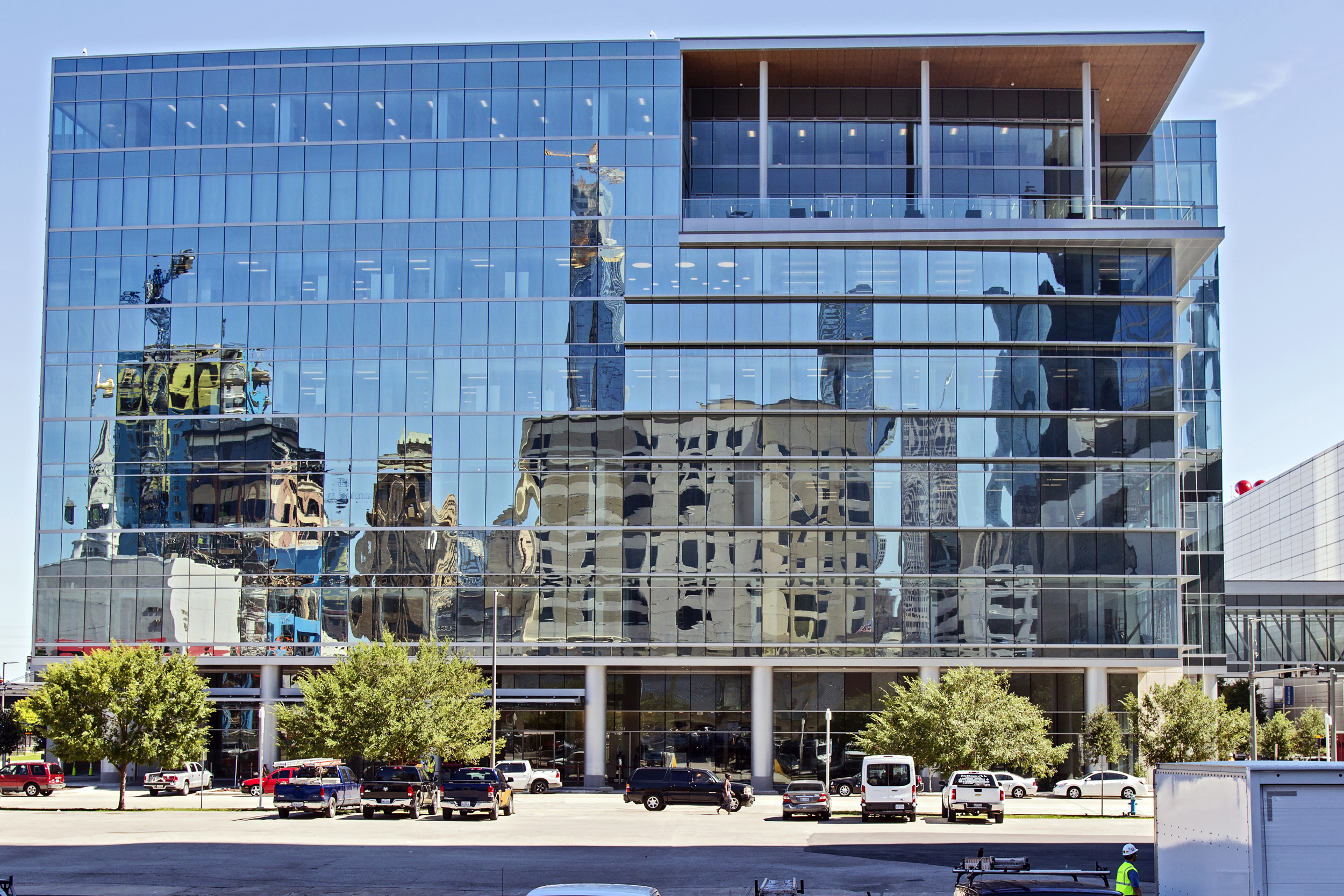 The Greater Houston Partnership recently celebrated the third anniversary of Partnership Tower, the organization’s Downtown home that serves as the front door to the Houston region.

In 2019 the Partnership hosted individuals and organizations from across the country and around the world at Partnership Tower as part of the organization’s work to advance Houston as a great global city.

As Houston’s front door to the world, Partnership Tower has hosted a number of international dignitaries seeking to invest and build trade ties in our region. So far this year, the Partnership has hosted more than 133 delegations from 46 countries, including Poland, Greenland, Mexico, China, Hungary and Portugal. A few of the notable guests were President Andrzej Duda of the Republic of Poland, President Alpha Conde of Guinea, and Governor Diego Sinhué Rodríguez of Guanajuato, Mexico.

In an effort to attract leading companies to expand or relocate to the Houston region, the Partnership hosted approximately 16 site visits as these prospects explored the opportunities here. These visits represent a potential investment of more than $1.8 billion and the creation of more than 1,700 jobs.
Notable visits include: Microsoft, Google Cloud and the Army Futures Command.

Five industry committees made up of approximately 350 business leaders were formed to guide and assist in the development of the target industry sectors within the greater Houston region. These include Energy 2.0, Life Sciences, Manufacturing/Logistics, Digital Technology and Headquarters.

Partnership Tower offers members and guests a top forum for networking opportunities. More than 5,800 people gathered at Partnership hosted events so far this year, including membership engagement events, committees and meetings of the board of directors. Additionally, approximately 2,500 people visited Partnership Tower during the year for 32 member-hosted events, including receptions, luncheons, dinners and other meetings.

Click here for a PDF of the Partnership Tower report.

Partnership Comments on School Accountability and Economic Development in Austin

Week In Review The Partnership was active in Austin this week with Partnership President and CEO Bob Harvey testifying before two legislative committees. In addition, an important energy bill was heard in committee.Â  Senate Bill 1365: School Campus Accountability Senator Paul Bettencourt (R-Houston) presented Senate Bill 1365 in the Senate Education Committee on Thursday. The bill provides clarification of the school accountability, campus intervention and turnaround rules. Partnership President and CEO Bob Harvey testified in support of the bill and the need for clarifying the process for the Texas Education Agency to intervene when public school campuses chronically underperform. Harvey noted just 37 percent of Houston area students met third grade reading standards in 2019. Before the COVID-19 pandemic, just 47 percent of Houston area students were considered college or career ready. Harvey pointed to three essential elements for improved educational outcomes: accountability and measurement of students and schools, and improved educational techniques. He also noted that employers want to know they will have a trained, educated workforce. That is not possible when so many children are stuck in failing schools. Senate Bill 1255: Chapter 313 Reauthorization Senate Bill 1255 by Senator Brian Birdwell (R-Granbury) was heard on Thursday in the Senate Committee on Natural Resources and Economic Development. The bill reauthorizes the Chapter 313 economic development program for ten years, while also eliminating renewable energy projects from qualifying for the program and making several changes to reporting requirements.Â  Harvey testified before the committee in favor of the bill. He noted the vital importance of the program for regional economic development projects, and requested the bill be changed to include renewable energy projects as well as to eliminate what are known as "revenue protection payments" for school districts. These payments make the program less competitive and were rendered unnecessary by the school finance reforms in 2019.Â  "Rebuilding the Houston economy is my top priority at the Partnership. I need all the tools I can [get] to bring investment to Houston, investment to Texas, so that we can rebuild this economy in the face of....a very difficult environment for oil and gas. The future is not the past and we need all our tools to be able to compete and bring new industry, in addition to traditional energy," said Harvey. The Partnership was joined in its support for SB 1255 by organizations such as the Texas Oil and Gas Association, Texas Association of Manufacturers, Texas Chemical Council and Texas Taxpayers and Research Association. Reauthorization of the Chapter 313 program is a key priority for this legislative session. House Bill 1284: Class VI Wells On Monday, the House took an important step forward on carbon capture and storage legislation during a hearing in the House Energy Resources Committee on House Bill 1284, by Representative Chris Paddie (R-Marshall). The legislation centralizes authority for underground CO2 storage using Class VI wells under the Texas Railroad Commission. Current law has dual jurisdiction between both the Railroad Commission and Texas Commission on Environmental Quality. In giving the Railroad Commission sole jurisdiction, Texas can then join other states in obtaining full regulating authority, or primacy, from the Environmental Protection Agency. This will reduce time and bureaucracy to secure permits to store CO2 underground, accelerating Texas' path toward a low carbon future.Â  Learn more about the Partnership's legislative prioritiesÂ here.Â
Read More

Week In Review This week in Austin was marked by a contentious back and forth among state leaders about the appropriate response to Winter Storm Uri. Meanwhile, in committees, broadband access and expansion received full support.Â  State Leaders Weigh in on Winter Storm Billing In an unexpected series of moves early this week, the Senate passed Senate Bill 2142, which would force the Electric Reliability Council of Texas to reverse $4.2 billion in charges in response to what some consider artificially inflated wholesale power prices during the winter storm. House Speaker Dade Phelan declined to take up the bill in the House and stated that repricing would be an "extraordinary government intervention into the free market." Meanwhile, Governor Greg Abbott, sought and received the resignation of the last remaining commissioner on the Public Utility Commission. The week was capped off by Lieutenant Governor Dan Patrick calling on Governor Abbott to use his executive authority to reverse billions of dollars in charges for wholesale electricity. Addressing the Digital Divide The state's omnibus broadband bills were heard in both the House and Senate this week. On Wednesday, Senate Transportation Chairman Robert Nichols (R - Jacksonville) and author of Senate Bill 5, heard testimony on the Senate version of the broadband package. The bill was left pending in committee, but enjoyed overwhelming support from outside stakeholders during the hearing. On Thursday, State Representative Trent Ashby (R - Lufkin) and author of House Bill 5, laid out the bill in the House State Affairs Committee. It also enjoyed overwhelming support from both committee members and outside stakeholders. Although the two bills are similar â establishing a statewide broadband plan, creating a broadband office, mapping requirements and rules for grant funding â the major difference between them is where the office would be housed. The Senate version calls for it to be housed in The University of Texas System, while the House version calls for it to be in the state comptroller's office. The Partnership supports both bills, but favors the House version, given its preference for the broadband office residing with the Comptroller. The bills are expected to be voted out of their respective committees in the coming weeks. Electric Grid Hearings Continue Hearings on the state's electric grid continued this week, with the House State Affairs Committee taking up six priority bills designed to address problems from Winter Storm Uri and the mass power outages. Two are administrative. House Bill 12 by Representative Richard Raymond (D-Laredo) establishes a statewide power outage public alert system. House Bill 13 by Representative Chris Paddie (R-Marshall) creates the Texas Energy Disaster Reliability Council to work among state agencies and ERCOT to prevent future outages and to coordinate responses among the state and industry, including better tracking of critical facilities and infrastructure. House Bill 16 by Representative Ana Hernandez (D-Houston) prohibits consumer wholesale electric plans, like the ones which resulted in some customers receiving massive electric bills. House Bill 10 by State Affairs Committee Chairman Paddie overhauls the ERCOT governance, adding 5 additional members to the governing board appointed by the Governor and Legislature, one of which is required to represent consumer interests. The proposed reforms require all ERCOT board members reside in Texas and, for the first time, require members serve staggered two-year terms. The lack of consumer representation on the current ERCOT board was a consistent point made during witness testimony. House Bill 11, also by Chairman Paddie, mandates winter weatherization of power plants and requires the Public Utility Commission work with power generators to implement and oversee those requirements. Winter Storm Uri brought lower temperatures for longer periods of time than existing weatherization standards. The final bill, House Bill 17 by Representative Joe Deshotel (D-Beaumont), prohibits local regulations or restrictions based upon energy source. Each bill received broad support from witnesses. Representatives said that changes to the bills will continue as they move through the legislative process. Chapter 313 Hearings House Bill 1556 by Representative Jim Murphy (R-Houston) reauthorizing and modernizing the Chapter 313 economic development program is expected to be heard in the House Ways and Means Committee in the coming weeks. Chapter 313 provides temporary tax abatements to businesses which would otherwise locate in other states. The program has generated billions of dollars in capital investments and tens of thousands of jobs. Chapter 313 has proven effective at bringing manufacturing and industrial facilities to the Houston region. House Bill 1556 is widely supported among businesses, chambers of commerce and economic development organizations. The Partnership is working closely with those allies to ensure the Chapter 313 program is reauthorized this legislative session.
Read More

Do you want to see an overview of membership benefits, build your company engagement plan, discover the best Partnership Programs and Resources that fit your business needs, and learn how to engage your employees…