Report: Houston Growth Expected to be Among Strongest in U.S. through '23 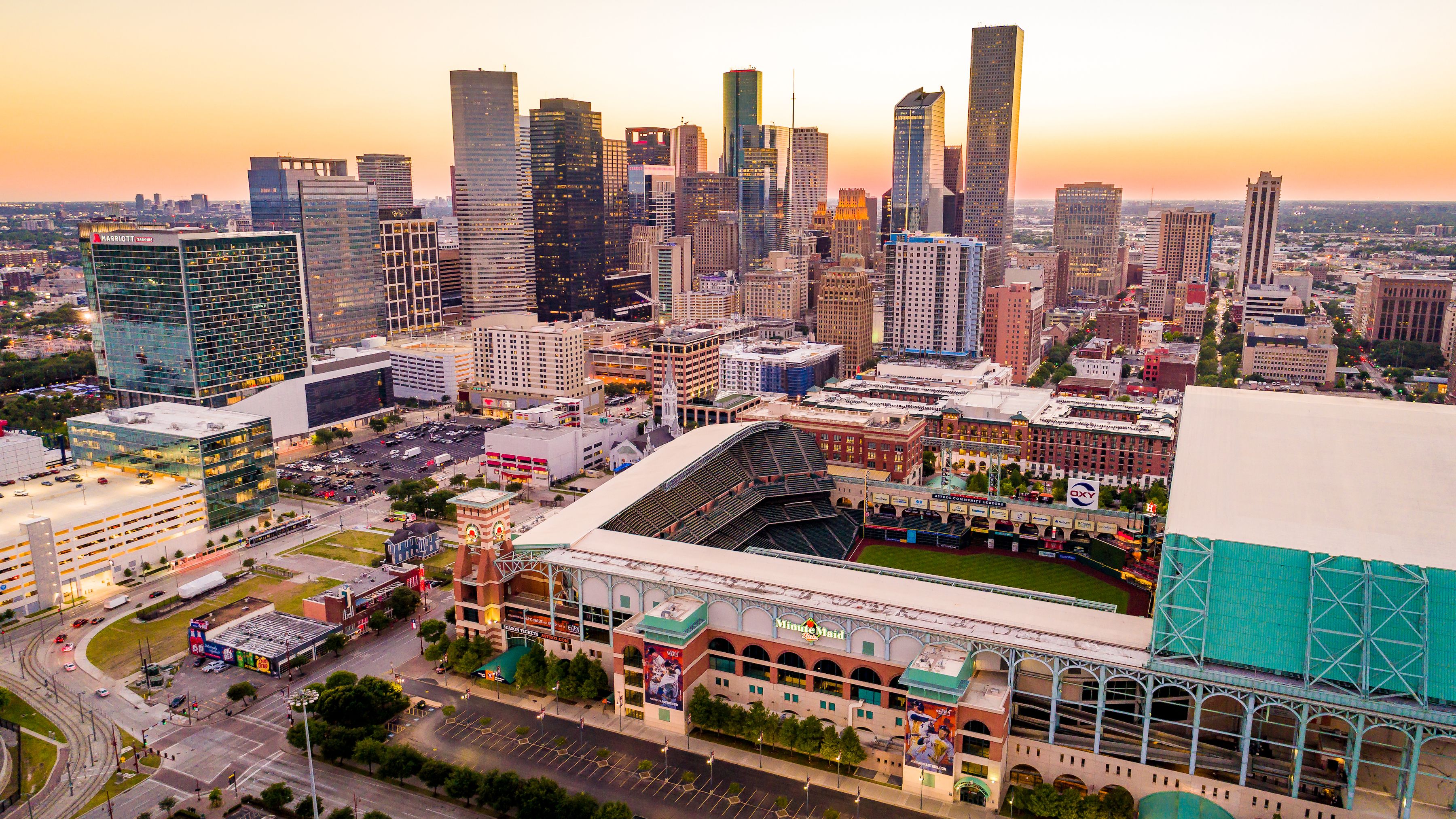 Houston is one of only a handful of major U.S. cities expected to see economic growth over the next three years, according to a new report from Oxford Economics.

The GDP of both Houston and Dallas are forecasted to grow at an average annual rate of 2.4% between now and 2023, the report finds. That’s second only to San Francisco, where the GDP is expected to increase an average of 2.7% over the next three years.

The Oxford Economics analysis projects that nearly two-thirds of the world’s major cities will experience an economic dip in the next two years; the 10 largest global cities are all forecasted to see a decline in GDP.

The Houston metro GDP increased an average of 1.5% from 2015 to 2019. Oxford Economics forecasts local GDP growth of 1.9% on average over the next two years.

The Partnership forecasts that the Houston region will add 42,300 jobs in the year ahead, led by gains in healthcare, government, food services, and construction. Job losses are anticipated in the energy, retail, and information sectors.

See more Data from the Partnership and get insight into economic indicators from the last year in Economic Highlights.

What does Houstonâs population look like today? How has the energy industry changed here in recent decades? And just how much does the arts and culture sector contribute to the local economy? These questions and many others are answered in the Partnershipâs annual Houston Facts publication, a helpful reference guide and resource for understanding the dynamics of the region.Â  Houston Facts is put together by the Partnershipâs Research team led by Patrick Jankowski. In an August 4 virtual presentation, the staff discussed various segments of this yearâs publication. Here are a few highlights from team members:Â  Quality of Life â Heath DuranÂ  In 2018, the latest period for which figures are available, the Houston region welcomed 22.3 million visitors.Â  As of 2019, the area has more than 980 hotels and motels with a total of 95,000 rooms. Thatâs up from 85,000 in 2017 when Houston hosted Super Bowl LI.Â  Airbnb listings have grown in the Houston region in recent years. Last year, the platform generated $117 million in revenue for hosts. Arts and culture contribute roughly $1.1 billion to the local economy.Â  The cityâs profile as a dining destination has grown significantly in recent years with 13 James Beard Award semifinalists last year. Houston restaurants boast more than 130 different categories of cuisine.Â  Unfortunately, the COVID-19 pandemic has shuttered a wide assortment of customer-oriented businesses across Houston. Earlier this year roughly 3,500 Yelp-reviewed businesses in the region were closed, and only a fraction of those have since reopened.Â  Health Care â Heath DuranÂ  Roughly 376,000 people are employed in health care in metro Houston. That translates to about one out of every eight workers.Â  Across the region there are approximately 19,000 licensed physicians and about 19,300 patient beds in area hospitals.Â  The Texas Medical Center, the worldâs largest medical campus, is actually the 8th largest business district in the U.S.Â  TMC logs more than 8 million patient visits per year and roughly 180,000 surgeries. TMC3, the translational research campus now being built adjacent to TMC, will bring academic institutions, researchers and private sector companies together to collaborate. Set to open in 2022, TMC3 is expected to have an annual economic impact of $5.4 billion.Â  Innovation and Tech â Josh PherigoÂ  Tech contributes approximately $28 billion to the Houston economy and employs roughly 235,000 workers across a wide assortment of industries.Â  Houston area companies received $600 million in venture capital funding in 2019. Over the last five years, about $1.9 billion in venture capital funding flowed into the region, more than double the previous five-year period.Â  The leading sectors in local venture capital investment are health care, information tech, business services and energy.Â  Energy â Roel MartinezÂ  With some historical reference from previous iterations of Houston Facts, we know that Texas produced roughly 30 million barrels of crude oil in 1905. In 2018, the state produced 1.85 billion barrels.Â  Houston today is home to roughly 4,600 energy-related companies, up from 1,000 in 1940. The cityâs refining capacity in 1940 stood at 575,000 barrels a day. Today that has grown to 2.6 million barrels a day.Â  Energy jobs in the region peaked at 293,000 in 2014. By last year that had fallen to about 257,000 jobs. Itâs unclear right now how much COVID-19 and the dramatic fall of the energy markets will further diminish energy employment in the region by year-end.Â  International Business and Trade â Berina SuljicÂ  The Houston/Galveston Customs District, which includes six seaports and two airports, is the busiest district by tonnage in the nation. It has been the busiest in nine of the last 12 years.Â  The total value of trade moving through the region was $236 billion in 2019.Â  About 8,300 ships move through the Port of Houston annually, many of them tied to the petrochemical industry which dominates large sections of the Houston Ship Channel.Â  Houston trades with more than 200 countries around the world. The regionâs largest trade partners in 2019 were Mexico, Brazil, China, South Korea and the Netherlands, in that order.Â  How Houstonâs trade ties will be affected by the pandemic and the new U.S.-Mexico-Canada Agreement, which replaced NAFTA, remain to be seen.Â  Demographics â Elizabeth BalderramaÂ  The population of the Houston region has grown by more than half a million people every decade since 1950.Â  Over the last decade, there were nearly 900,000 babies born in our region. During that same period, more than 600,000 people moved to the area, most of them from abroad.Â  Today, nearly a quarter of our residents are foreign-born.Â  Last year, for the first time, the largest percentage of residents in the region were not white but Hispanic or Latino. Over the last 25 years, the Latino segment of the population has grown from 29% to 38%.Â  The Latino population in the Houston region is the fourth largest among U.S. metro areas.Â  Looking at our population through the lens of COVID-19, we see a disproportionate number of infections and serious cases in minority populations.Â  Since May, more than 50% of new COVID hospitalizations have been Hispanic patients in Harris County; 25% have been Black patients.Â  On the education front, Houstonians are more educated than ever before as educational attainment has increased steadily in recent years. One out of every three adults in the region holds a bachelorâs degree.Â  While educational attainment has been moving in the right direction, it remains to be seen how the pandemic will impact k-12 and postsecondary education.Â  Click here to view and download the 2020 edition of Houston Facts. Â
Read More

Just a couple of days after successfully splashing down inÂ the Gulf of Mexico, NASA astronautsÂ Robert Behnken and DougÂ Hurley spoke about their experienceÂ at Johnson Space Center in Houston on August 4. Behnken and Hurley wereÂ aboard the SpaceX Crew Dragon capsule returning from the International Space Station to complete a test flight that marks a new era in human spaceflight. It's also a milestone for SpaceX, the first private company to send people to the space station.Â  "[I'm] glad to be back and it's great to see how excited everyone was for our mission and following along and we hope it brings a bit of brightness to 2020," said Hurley during the August 4 press conference.Â  Behnken and Hurleyâs return was the first splashdown for American astronauts in 45 years. The last time was at the end of the Apollo-Soyuz Test Project whenÂ Thomas Stafford, Vance Brand, and Donald âDekeâ Slayton landed in the Pacific Ocean off the coast of Hawaii onÂ July 24, 1975. âItâs a testament to what we can accomplish when we work together to do something once thought impossible. Partners are key to how we go farther than ever before and take the next steps on daring missions to the Moon and Mars," said NASA Administrator Jim Bridenstine.Â  This is SpaceXâs final test flight. According to NASA, itÂ provides data on the performance of the Falcon 9 rocket, Crew Dragon spacecraft and ground systems, as well as in-orbit, docking, splashdown, and recovery operations. "The Partnership joins NASA and Johnson Space Center in celebrating the return of Houston astronauts Bob Behnken and Doug Hurley," said Susan Davenport, Senior Vice President of Economic Development for the Greater Houston Partnership.Â "Their commercial test flight with NASAâs SpaceX Crew Demo-2 is a remarkable achievement in commercial spaceflight and another historic milestone for Space City. We are proud of the significant role JSC and Houston played in preparing and executing this mission, which included spaceflight training and Mission Control support." Houston had a significant role in preparing and executing this mission, which included the spaceflight training and Mission Control support and direction at Johnson Space Center. Behnken and Hurley also join a long list of Houstonians who've traveled to space. In fact, for the past 20 years, there has always been a Houstonian in space.Â  SpaceX maintains aÂ Houston office near Johnson Space Center and a section of the JSC floor is dedicated to the company with a Dragon capsule mockup, whichÂ Behnken and Hurley used for training purposes.Â  The mission alsoÂ marks another significant milestone for Houston as a global leader in aerospace and commercial spaceflight.Â  More than 500 aerospace and aviation-related firms and institutions are within the greater Houston region. Houston also has 10 of the 50 largest aerospace manufacturing companies in the country.Â Â The metro's total trade in aircraft, spacecraft and parts totaled $2.9 billion in 2019, making it Houston's 11 largest internationally traded commodity.Â Houston is home to 350 companies involved in aircraft or space vehicle manufacturing, research and technology or other air transportation support activities.Â  Houston is also home to Houston Spaceport,Â an FAA-licensed, urban commercial spaceport at Ellington AirportÂ offeringÂ 53,000 square feet of office and lab space, including technology incubator space and large-scale hardware production facilities. The aim is to foster and accelerate key aerospace engineering activities, including space vehicle assembly, astronaut training and development, and space tourism. The spaceport alsoÂ serves as a future launch and landing site for suborbital, reusable launch vehicles.Â  "With the global space industry projected to grow to a trillion-dollar economy by 2040, we believe Houston will continue to play a leading role in the emerging commercial realm of space flight," said Susan Davenport.Â "The Partnership is working to bring more companies to this region to build a world-leading commercial space ecosystem in Houston, as well as capitalize on the synergy they will find with NASA and existing aerospace organizations." Watch NASA's video of SpaceX's Crew Dragon return to Earth and splashdown. Learn more about aerospace and aviation in the greater Houston region.Â
Read More