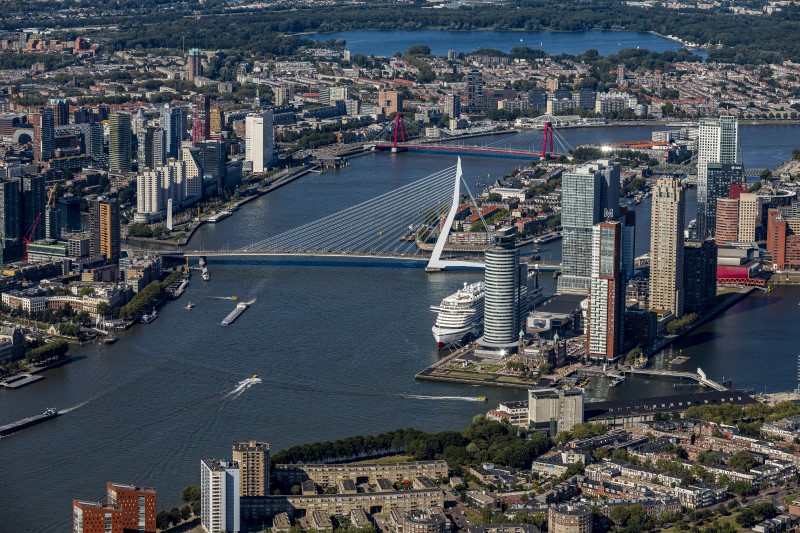 The Maas with the Kralingse Plas in Rotterdam, Guido Pijper

Officials in Houston and the European city of Rotterdam held a digital trade forum this week to strengthen economic ties between the two cities.

Rotterdam and Houston share a number of characteristics as energy hubs and port cities. The forum that took place November 16-18 focused around Energy 2.0 and the application of hydrogen, carbon capture and digital tech in the energy sector.

Rotterdam Partners, the economic development organization for the Dutch city, and the Greater Houston Partnership signed a memorandum of understanding on November 16 aimed at strengthening the economic relationship between the two regions. The Netherlands is currently Houston’s fifth largest international trading partner, averaging $9 billion in goods and services traded annually over the last decade.

“As the Energy Capital of the World, Houston is uniquely positioned to lead the transition to a cleaner, more efficient, and more sustainable lower carbon world,” said Bob Harvey, President and CEO of the Greater Houston Partnership. “The region is committed to working with our global partners on tackling this challenge head on and identifying solutions for the future. As a top investor to this region and an established leader in Energy 2.0 activity, the Netherlands is a natural partner for Houston.”

Wilbert Lek, Director of Rotterdam Partners, said the collaboration offers Dutch and American companies the opportunity to expand networks and explore new business markets. “The many shared similarities between Rotterdam and Houston make the exchange of knowledge very important,” he said.

A longtime hub for the oil and gas industry, Houston is now focused on helping lead the global energy transition to a more sustainable, lower carbon future. This includes developing a robust Energy 2.0 ecosystem that includes renewable energy production and new energy tech. Energy transition is likewise a top priority in Rotterdam. During this digital trade forum, participants learned more about business opportunities in the energy transition in both Texas and the Netherlands, with a specific focus on hydrogen, carbon capture and digital tech. Dutch and American companies also had the chance to network with relevant discussion partners during pre-arranged matchmaking sessions.

Officials from both Houston and Rotterdam cited the economic similiarities between the two cities as an opportunity for more focused collaboration and exchange of knowledge. Houston offers Dutch companies a prime position for doing business in the U.S. and across the Americas.

The Maas with the Kralingse Plas in Rotterdam, Guido Pijper

Since 1840, the Greater Houston Partnership has strived to make the Houston region the best place to live, work and build a business. Through the dedicated efforts of our 900 member companies in the 12-county Houston region, the Partnership supports the growth of industry and innovation by convening community-minded business leaders with one goal in mind - to make Houston greater.Â  While the world around us is rapidly changing, the Partnership remains committed to our mission-driven work that promotes Houstonâs growth. As Houstonâs largest regional chamber of commerce and principle business organization, the Partnership is recognizing this yearâs Support Your Local Chamber of Commerce Day by looking back at some of the greatest impacts weâve made in Houston in the last year.Â  Serving as a Robust COVID-19 Resource The virusâ arrival to Houston in the spring of 2020 drastically changed how the Partnership served our region. Halting in-person interactions to ensure the health and safety of our members, the Partnership quickly shifted major events, programs and meetings to an online environment. Through virtual forums with leading medical experts, as well as comprehensive communications through email, social media and the Partnershipâs website, Houston.org,Â our organization worked closely with leadership at the Texas Medical Center to become a reliable source of COVID-19 data, best business practices, and health and safety information.Â  Tom DeBesse, Region Bank President of Houston North Region at Wells Fargo, said staying engaged with the Partnership during this critical time ensured his team remained well informed to make important decisions on employee and customer safety.Â  "I canât tell you how important it has been to stay on top of information regarding COVID-19 as weâve had to make changes to our daily operations during these difficult times,â DeBesse said. âThe Greater Houston Partnership has served as a valuable resource for usâproviding timely and useful updates that bring awareness and insight to news, health data, and best practices as it pertains to impacting our local business community." Convening the Greater HoustonÂ Business Community Serving 900 member companies, the Partnership plays a major role for facilitating local, national and international business connections. Providing an avenue for connections through events, membership networking and business-driven conversations, allows Houston â and businesses to benefit in ways that are most valuable to their company.Â  Tracy Weeden, President & CEO of Neuhaus Education Center, said the connections sheâs formed through her membership with the Partnership have made a significant impact on her business.Â  âBecoming a member of the Partnership was one of the best professional decisions Iâve made as a CEO,â Weeden said. âEven though Iâm leading a nonprofit, the ability to cross-pollinate with organizations in various industries is extremely helpful. Interacting and benefiting from the thought leadership in the business community has shown me that they are really tackling the same issues we are facing.â Impact-Driven The PartnershipÂ work to promote economic development and trade is reflected through our initiatives and economic development projects. Most recently, the Partnership launched theÂ Houston Energy Transition Initiative, which will be guided byÂ a strategic regional blueprint for leading the global energy transition to a low-carbon world. This initiative demonstrates the collective impactÂ the Partnership makes when convening key stakeholders across industry, government and academia and highlights the organization's work to position Houston among the great globalÂ citiesÂ of the future. Steve Clarke, Division Vice President of Jacobs and Chair of the Partnershipâs Infrastructure and Resiliency Advisory Committee, said heâs proud to play a role in the Partnershipâs impact to infrastructure projects around the region.Â  âIt is not often that you get to be part of a legacy project that will ultimately protect millions of our fellow Texans and change the way that we all look at Coastal Resilience,â Clarke said. âThanks to the Greater Houston Partnership and the members of the Infrastructure Resiliency Advisory Committee, that Iâve had the honor of chairing the past 2 years, for your advocacy and lobbying that have made coastal infrastructure projects like this and many others possible.â Learn more about the Partnershipâs impact. Have a testimonial you'd like toÂ share with us? Share your story with our Member Engagement team.Â
Read More

Pandemic induced weakness in Houstonâs office market is creating significant opportunities for tenants seeking higher quality space and concessions. The shifting dynamics are also making the Houston market more attractive to companies eyeing relocation from more expensive coastal cities.Â  Much like other major U.S. markets, Houston is striving to overcome the challenges brought on by the pandemicâs uncertainty, according to a Q3 report on the local office market from commercial real estate group JLL. Â During the most recent quarter that ended September 30, the office market recorded 268,509 square feet of negative net absorption, bringing the total to 2.2 million square feet of occupancy losses so far this year. Total vacancy in the market stands at 27.2%, which is a new high.Â  JLL Senior Research Analyst Isabel Choi said that despite the most recent losses, the decline rate in absorption is slowing, suggesting some improvement. âI donât think the market is turning a corner yet,â Choi cautioned. âVacancy is expected to peak in the high 20%-range in early 2022 and will begin a slow recovery.âÂ  The current market dynamics are creating a âflight to qualityâ among tenants looking for better digs at cheaper or comparable rates. âThe next 6 to 12 months will be an opportune time to execute a lease in the office market,â Choi said. âAs new sublease space continues to be added to the market, there are also some long-term, move-in ready sublease availabilities for companies willing to consider those options. These can offer discounted prices in terms of rents to large-scale tenants with good amenities.â Choi said Texas is seeing more activity from companies looking to move from West and East Coast markets. âBased on JLLâs tracking of recent corporate moves, the Houston metro has seen greater activity from new and expanding companies as well,â she said.Â  The prospective tenant mix is similar to what it was pre-pandemic, Choi said, led by companies in the energy/utility and banking/insurance industries, as well as back-office health care. Thereâs also growing interest among operators of coworking spaces and executive suites looking to satisfy increased demand among flexibility-seeking tenants.Â  Houstonâs growing population, relatively low cost of living and diversity are all factors that continue to work in the office marketâs favor, Choi said.Â  JLL is a Partnership board member company.Â  Get the latest JLL report and get more data on the Houston real estate market.Â  Â
Read More

State of the Houston Region

Join the Greater Houston Partnership for the third annual State of the Houston Region virtual event. The event will feature a panel of County Judges and business leaders in a virtual setting…