Venture Capital, Expansion of the Ecosystem Among Subjects Discussed at State of Tech 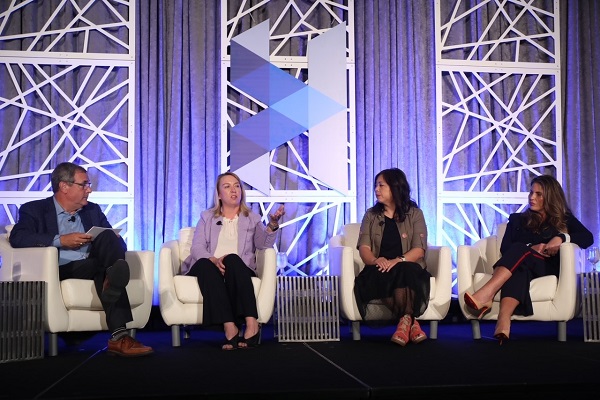 Technology industry experts from across the region gathered this week for the Partnership’s second annual State of Technology event at the Hilton Americas. A wide-ranging panel discussion covered some of the topics most important to Houston’s evolving tech landscape, including access to capital, the expansion of major tech players and the growing importance of environmental, social, governance or ESG in tech.

Partnership President and CEO Bob Harvey served as moderator for the discussion and was joined by Sandy Guitar, Managing Director at HX Venture Fund, Ann Lai, Vice President and General Manager of Displays Solutions Business Group, HP Inc. and Trinity Lloyd, Sustainability and Energy Transition Lead at Google Cloud. They lead the conversation on Houston's growth in innovation and the many ways our city supports a robust, ever-evolving tech ecosystem. From conversations on how the pandemic has influenced the way technology is approached to an update on Houston’s role as a national leader in tech innovation, the afternoon was an insightful look into the past, present and future of technology.

Harvey celebrated the progress Houston has made and discussed the reasons Houston’s technology scene has seen a significant increase in the past years, despite challenges from the pandemic.

“Venture capital funding of Houston companies has grown from $284 million in 2016 to $2.34 billion in 2021,” said Harvey. “This growth includes a concentration of early-stage funding, positioning Houston as the 3rd fastest growing early-stage tech ecosystem in the country.”

Industry experts believe Houston can compete with already established tech hubs, such as Silicon Valley, because it offers diversity, opportunity and the much-needed support for startups to succeed.

"Houston ranked second among 14 major U.S. labor markets for the number of relocating software and IT workers, according to a report by Axios in May 2021," said Harvey. “Houston is attracting interest from large technology companies like Hewlett Packard Enterprise, which recently moved their headquarters to Houston.”

Panel topics included the prominent shifts in the industry, tech waste, the importance of digital inclusion and the continuation of Houston’s rise as one of the country’s most prominent emerging tech hubs. The panelists also discussed several crucial components required for the continued success of Houston’s growth in tech innovation.

“Houston has an infrastructure and intellectual capital unlike any other city in the world,” said Lloyd. “It’s critical for anything across ESG/climate spectrum. Putting a focus on that, on how people can make a difference, means that the next generation will gravitate here”

“How do we use all of us as grassroots ambassadors for Houston’s tech ecosystem,” said Lai. “That’s critical. We also need to get talent earlier in the pipeline.”

Each panelist shared how their companies have contributed to the incredible momentum in innovation as well as their commitment to ensure that with this growth comes accessibility. Additionally, the panel shared insight on how technology not only impacts several industries, but communities as well.

“ESG and technology are deeply integrated and connected,” said Lloyd. This is an opportunity for every organization to embrace their energy, their climate and their ESG to help lead others in their sectors.”

Looking forward, the panel all agreed that there is a responsibility to use technological advances to better workplace culture and productivity as we begin to function in what many call the “new normal.” Although the pandemic may have spurred rapid development in technology, that will not slow down anytime soon.

“There’s a full democratization and decentralization in venture capital and in tech companies themselves... most venture capitalists are very focused on how to get the best ideas in the most democratic way possible,” said Guitar.