About
/
Board of Directors
/
Kevin Roberts 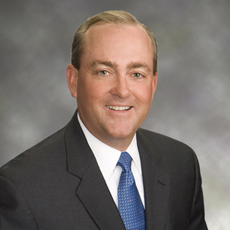 TRANSWESTERN ROLE
Kevin has overall responsibility for Transwestern's Southwest operations, which includes Houston, Austin, San Antonio, New Orleans, Denver and Salt Lake City. In this role, he oversees the firm's brokerage services and property management projects across the Southwest. Kevin also serves on Transwestern's Board of Directors and Executive Committee.

CAREER HIGHLIGHTS
During his 26 year career with Transwestern, Kevin has been instrumental in the re-positioning and growth of the firm's third-party service business in the Southwest. Under his direction, the Central Texas operation grew from 5 million to more than 16 million square feet.

Kevin began his Transwestern career as an office leasing agent and has completed in excess of 280 lease transactions totaling more than 1,427,000 square feet. He was also instrumental in the success of the Houston high-rise office leasing efforts, completing numerous anchor transactions, including the city's largest lease transaction in 1998 for Houston's Metropolitan Transit Authority (METRO).

Prior to joining Transwestern, Kevin worked for the Professional Services Divisions of Procter & Gamble and Johnson & Johnson.

EDUCATION
Kevin received his Bachelor of Science degree in advertising from The University of Texas at Austin and he is a licensed Real Estate Broker in the State of Texas.