About
/
Board of Directors
/
Robert B. Sloan 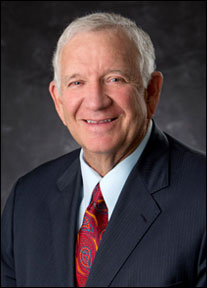 Dr. Robert B. Sloan is the president of Houston Baptist University and has served in this capacity since September 1, 2006. Under Dr. Sloan’s visionary leadership, the University is experiencing unprecedented growth as he and his administrative team continue to implement the goals, or pillars, in HBU’s twelve-year vision, The Ten Pillars: Faith and Reason in a Great City, and work to create a new vision document for the years beyond.

Though 2020 has brought many challenges, HBU posted a record fall enrollment for the eighth year in a row, with about 4,000 students enrolled in more than 100 degree programs. As reported by Dr. Sloan, many factors are responsible for this growth, but the most important are the University’s faithfulness to its historic Christian mission and its rigorous pursuit of its Ten Pillars vision.

HBU’s emphasis on providing a Christian education of the highest quality has become increasingly visible through numerous recent developments, including the continued growth of its faculty of acclaimed Christian scholars, as well as significant growth in its academic programming. In the fall of 2018, the University launched its College of Engineering, which has now merged with the College of Science and Mathematics to form the College of Science and
Engineering. Innovative new undergraduate programs offered through this college include Cyber Engineering, Computer Science, and Electrical Engineering. Other recent changes include the addition of a third doctoral program—the EdD in Executive Leadership in Mental Health and Human Services—as well as numerous master’s-level programs. HBU also has expanded offerings—both graduate and undergraduate—in its Pinky Pampell Online Division, which celebrated its largest enrollment for the fourth consecutive year this fall.

Additional changes to the undergraduate academic program under Dr. Sloan’s leadership include the launching of an Honors College and the implementation of a strong interdisciplinary Liberal Arts Core Curriculum designed to engage undergraduates with the greatest thinkers, authors, and artists in Western Civilization. As its visibility increases, the Honors College continues to attract outstanding students interested in a quality education that promotes a Christian worldview.

Another major gift, from Advisory Trustee Jim Smith Sr. and his wife, Sherry, will fund the renovation and new construction of classroom space and laboratory facilities to be used by the
College of Science and Engineering and the School of Nursing and Allied Health. The new building will be named in honor of the Smiths, who have a long family history of supporting
HBU and its mission. This is the largest single gift in the history of the University.

During Dr. Sloan’s tenure, HBU also announced a generous gift from well-known Christian business executive Archie W. Dunham and his wife, Linda—and the naming of the Archie W.
Dunham College of Business. In addition, the University established its McNair Center for Entrepreneurship and Free Enterprise in partnership with the Janice and Robert McNair
Foundation.

Other factors contributing to the University’s growth and increasing visibility during Dr. Sloan’s tenure include HBU’s return to full membership status in Division I of the NCAA; the decision to join the Southland Conference and play football; the construction of Dunham Field and Husky Stadium; ongoing implementation of HBU’s master plan through its US Highway 59 and Fondren project involving the construction of Belin Tower and Belin Drive, as well as an exciting retail development called The Pillars at HBU; the acquisition of the Bradshaw Fitness Center and the construction of two new buildings—the University Academic Center and the
imposing six-story residence facility called the Sadie and Doug Hodo Residence College; the steady growth of HBU’s on-campus residential population; and the recent implementation of various student life initiatives to promote student success, including the creation of the Doris and Terry Looper Learning Commons, which houses HBU’s Academic Success Center.

All these developments—and many still to come, including plans for additional doctoral programs—reflect the work of Dr. Sloan and his administrative team in implementing the goals
in HBU’s Ten Pillars vision.

Dr. Sloan serves on the Board of Directors of the Houston Symphony, the Greater Houston Partnership, the Cullen Trust for Higher Education, and Citizens Inc., a New York Stock
Exchange listed company. He also serves on the Community Relations Committee of Memorial Hermann Healthcare System.

Dr. Sloan has pastored churches throughout Texas and beyond. He is the author of numerous articles, reviews, and other published works, including the first two volumes of a young adult fantasy series (the Hamelin Stoop books). The third volume in the series is scheduled for publication in December of 2020. He has received many prestigious awards and has held
membership in a number of professional societies, including the Society of Biblical Literature, the Southwest Biblical Seminar, the National Association of Baptist Professors of Religion, and
Studiorum Novi Testamenti Societas.

Dr. Robert B. Sloan was born in Coleman, Texas, and grew up in Abilene. He is married to the former Sue Collier of Cisco, Texas. The Sloans have seven children, three daughters-in-law, and four sons-in-law: Charissa and Derrick; Bryan and Amy; Eraina and Bryan; Michael and Ali; Alathea and Justin; Sophie and Mac; and Paul and Meghan. They also have twenty-two
grandchildren.

Dr. Sloan blogs regularly about a variety of topics, including the Christian worldview and higher education.