About
/
Board of Directors
/
Steve D. Stephens 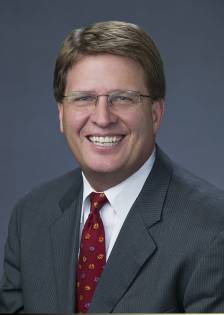 A founding executive of Amegy Bank, Steve Stephens serves as CEO of Amegy Bank. Amegy has grown to nearly $13 billion in assets and more than 75 locations since Steve joined Walter Johnson (Southwest Bank of Texas) in 1990 as executive vice president. Steve began his banking career in 1980 at Texas Commerce Bank (Chase) where he joined the lending officer development program. Over a 10-year period of commercial banking experiences, Steve became executive vice president in commercial lending for Texas Commerce - Reagan.

During his tenure at Amegy, Steve has led the bank's commercial banking, retail, and private banking activities. He has been engaged in all aspects of the bank, enjoying the bank's entrepreneurial spirit and association with quality bankers and clients. In 2005, Amegy merged with Zions Bancorporation-a $63 billion regional bank headquartered in Salt Lake City. As part of Zions Bancorporation, Steve serves as executive vice president and a member of the Executive Management Committee. In addition to his Amegy leadership role, Steve is committed to serving the Houston community in a variety of ways. Currently, he serves as board chair and member of Boys & Girls Country, United Way Board, Greater Houston Partnership Board, and Hobby Center Foundation Board. He supports Houston Methodist as chairperson of the President's Leadership Council and as a member of the Society for Leading Medicine. He is Senior Fellow of the American Leadership Forum and member of Chapelwood United Methodist Church. Previously, he served on the 2016 advisory committee for the Export-Import Bank of the United States (Ex-Im Bank).

Steve attended Texas Christian University and received his Bachelor's of Business Administration in Accounting from the University of Houston. He contributes to his alma mater as chair of the University of Houston's Board of Visitors and Bauer College Board. Steve is married to Anne-Laure Stephens and has four children. He enjoys fishing and other outdoor activities, as well as his farm in New Ulm, Texas.