Metro Houston added 25,800 jobs in November, according to data released today by the Texas Workforce Commission. This brings total jobs recovered since April to 202,500, amounting to 57.8 percent of the jobs lost in March and April. Houston remains 147,700 jobs short of its pre-pandemic employment level.

Historically, Houston always adds jobs in November. Since ’00, November job gains have ranged from 300 in ’15 (the depth of the fracking bust) to 21,600 in ’19 (the last November prior to the pandemic). Factor out the booms and busts of the past 20 years and November typically adds 16,000 to 20,000 jobs. That suggests this November’s job gains, a combination seasonal gains and COVID-19 recovery, were better than average.

Five sectors have recouped all jobs shed in March and April and their employment now exceeds pre-pandemic levels. Those sectors are transportation and warehousing; utilities; finance and insurance; professional, scientific and technical services; and retail. Retail’s gains, however, reflect seasonal hiring as stores take on additional help for the holiday shopping season. Since September, the sector has added 13,300 workers. Many of those workers will be released after Christmas. The same goes for transportation and warehousing. Courier companies hire additional warehouse workers and truck drivers to deliver all holiday packages. Since September, transportation and warehousing has added 10,400 workers. Many of them will also be released after Christmas. The net gains for the year are likely to be flat or negative.
Several sectors registered jobs losses in November, the largest losses occurring in the federal government (-4,000), fabricated metal product manufacturing (-1,100) and arts, entertainment and recreation (-600), and hardware/building materials stores (-500). The losses at the federal level resulted from the final round of layoffs for workers hired to handle the 2020 Census.

Houston’s unemployment rate was 8.9 in November, up from 7.7 percent in October and 3.7 percent in November ’19. The unemployment rate increased for several reasons even though Houston added jobs. For one, any Houstonian who dropped out of the labor force early in the pandemic was not counted among the unemployed back then. Now that they have re-entered they workforce, they are included in the calculations. Also the unemployment rates are based on a survey of households while job gains are based on a survey of employers. The two surveys use different methodologies and often produce conflicting results, as was the case with the November data. 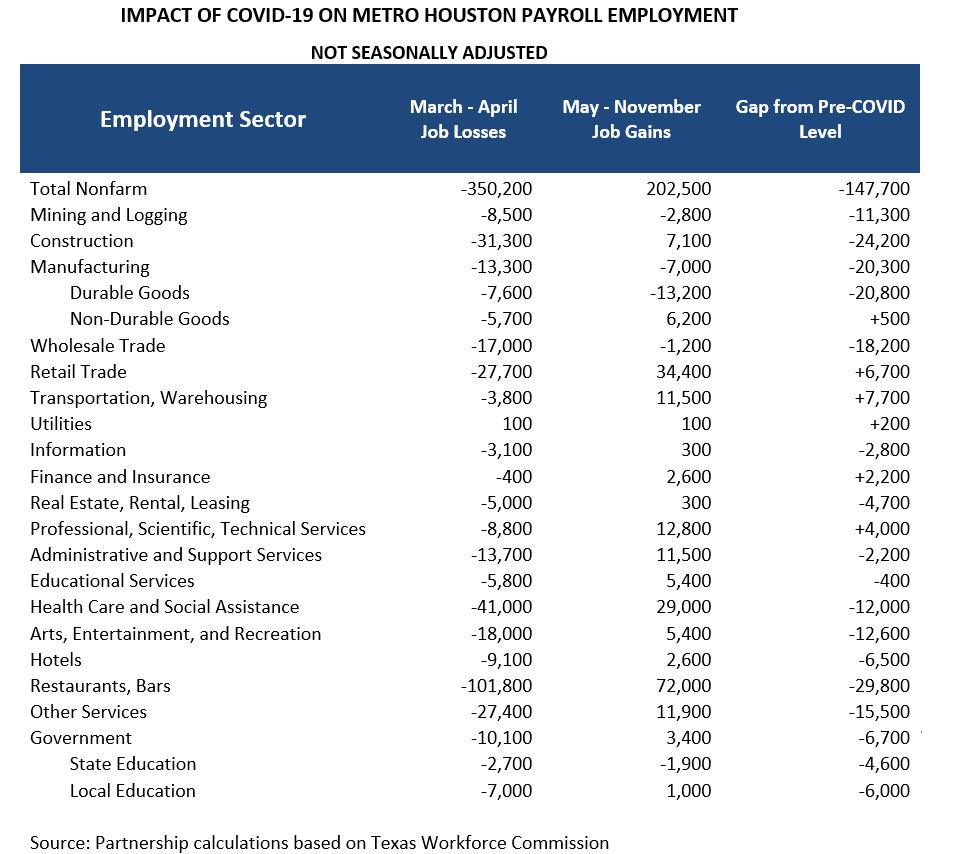 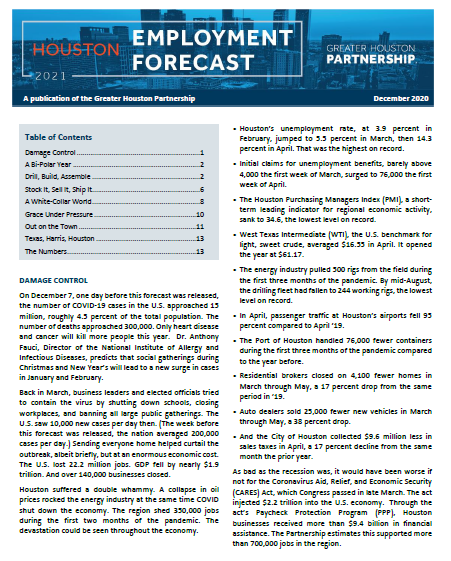