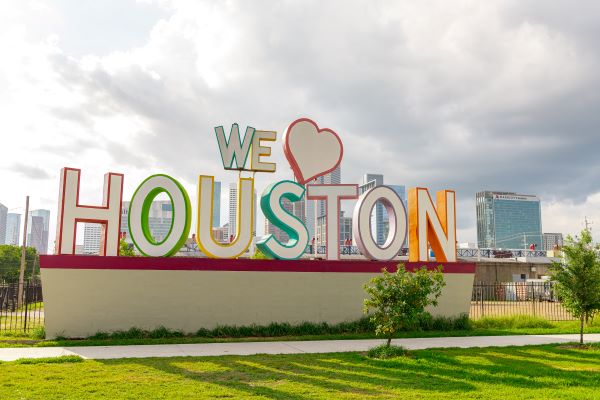 As one of the fastest growing cities in the country, Houston is diverse and brimming with opportunity. The metro region boasts a strong quality of life and low cost of living that draws new residents from across the country and around the world.

Whether you want to cheer on your favorite sports team or indulge in one of the nation’s most sophisticated dining landscapes, Houston truly has something for everyone. The size of greater Houston can seem daunting at first, especially for newcomers deciding where to put down roots. We broke down 12 of the area’s most popular neighborhoods and what they have to offer.

Find a Family-Friendly Suburban Feel in Bellaire/Meyerland
For those looking to own a home in a family-centric area with excellent school districts, Bellaire is a good option. Located in southwest Houston, this neighborhood has a suburban feel but is still close enough to the heart of downtown to enjoy some of the city’s best attractions, such as the Houston Zoo and top-rated Houston Children’s Museum! Don’t want to go too far? Bellaire has plenty of restaurants, coffee shops, kid-friendly breweries, parks and more for residents to enjoy!

Soak in the waterfront views in Clear Lake
Midway between Houston and Galveston, Clear Lake, also known as the Bay Area, hosts a variety of water recreational activities, such as fishing and water sports. This residential district is also home to Space Center Houston, the Kemah Boardwalk and countless seafood restaurants. There is plenty to do here for the outdoorsman/woman, and great public schools that are highly rated.

Dive into a Budding Urban Community in EaDo
East Downtown, more commonly called EaDo, is a growing neighborhood with exceptional city views, concert venues, diverse dining options and year-round sporting events. In fact, Houston has six professional major league teams, including the 2017 World Series Champion Houston Astros and the NBA Finals Champions Houston Rockets. The neighborhood is not only convenient for those looking to catch a game, it’s also near the Texas Medical Center, the largest medical center in the world.

Create Memories in the Cosmopolitan Energy of Galleria/Uptown
Centrally located in the City’s Uptown District, the Galleria/Uptown neighborhood offers more than 700 retailers, exquisite restaurants and luxury hotels. It’s also home to Texas' largest shopping mall and center for high-fashion retail, The Galleria. In addition to trendy shopping centers and eateries, this is also the 17th largest business district in the U.S. If loft living and fine dining is your preference, this might just be the location for you.

Jump into One of Houston’s Oldest Neighborhoods - The Heights
Northwest of downtown is the historic Houston Heights. This is one of Houston’s oldest planned communities, dating back to the late 1800s, and is well known for its signature bungalows. The Heights also offers a wide variety of activities, including antique stores, farmers markets and patio restaurants. With 450 Yelp-rated establishments and well-preserved Victorian architecture, this neighborhood has plenty to offer locals, tourists and new residents alike.

Embrace the Eclectic in Montrose
Celebrate art, nightlife and a wide variety of unique small businesses in the vibrant Montrose neighborhood just west of downtown, bordering Houston’s Museum District. Grab some java at one of the many coffee shops or a specialty cocktail at a signature bar. This pedestrian-oriented enclave is a great place to live for the creative minds looking for a place that offers diversity and inspiration.

Indulge in Major Green Spaces and Shopping Centers in Memorial
Memorial offers walking trails, reputable schools and several retail developments, including Memorial City, Town & Country Village and the widely popular CityCentre. It’s one of the largest and most affluent neighborhoods of Houston, spanning over 80 miles. This is a great option for families that’s not only close to downtown and The Galleria, but one of the largest urban parks in the country.

Leap into Trendy Midtown
Packed with high-rise apartments, eclectic restaurants and a vibrant late-night scene, Midtown is a popular choice for young professionals. Situated between downtown and the Museum District, Midtown is where you’ll find a wide array of choices to explore the best Houston has to offer, all within walking distance.

Stay Near the Heart of Houston’s Culture in the Museum District
This aptly named neighborhood is home to 19 world-class museums, including the Museum of Fine Arts Houston, the Houston Museum of Natural Science and the Houston Children’s Museum. The cultural institutions featured in this tree-lined neighborhood attract more than seven million visitors every year and appeal to every interest of all ages. The neighborhood is next to the Texas Medical Center and just a few blocks away from Rice University, making it an attractive option for employees of those institutions to live, work and play.

Live in the Nationally Ranked Suburban - Sugar Land
Sugar Land is located 20 minutes south of Houston and is steadily growing as more and more families choose to call it home. Much of Sugar Land is devoted to residential use, and Fort Bend and Lamar Consolidated ISD are major draws for families with children. The area’s also garnered national recognition as one of the safest midsize cities in America. Incorporated as a city in 1959, Sugar Land continues to grow rapidly with new attractions such as Constellation Field, home of the minor league Sugar Land Skeeters and the Smart Financial Centre, a performing arts venue.

Explore the Heavily Forested Area of The Woodlands
Appropriately named for its development in and around 28,000 tree-filled acres, this master planned community has so much to offer any and all lifestyles. Hiking, kayaking, golfing and attending concerts are just a few ways residents of The Woodlands spend their days. It is also home to many corporate campuses and is conveniently located just 28 miles north of downtown Houston. Public schools are also highly rated, making this an ideal location for families.

Visit the Houston Neighborhoods & Communities page to learn more about the many different regions and neighborhoods of the city. Find out more about what Houston has to offer with Here is Houston: The Official Relocation & Newcomer Guide.

Summer is around the corner! Soon, school will be out, and families will have more time to explore the city. Houston has so much to offer during this time. From cooling off at Schlitterbahn in Galveston to outings at Minute Maid Park and Miller Outdoor Theater, thereâs enough to keep the entire family entertained all summer long.Â  Enjoy a ShowÂ  If you have a little one in your life or love musical performances, you wonât want to miss FROZEN this summer at The Hobby Center for the Performing Arts. This canât miss Broadway show will tour in Houston from late June through July.Â  Have an older child? The classic Broadway sensation, WICKED, returns May 31. Recommended for ages 8 and up, this is the perfect family outing that also beats the Houston summer heat. See the complete list of current and upcoming shows here. Â  Attend a ConcertÂ  Calling all Encanto lovers! The widely popular film is coming to The Woodlands in sing-along form. This 2.5-hour-long concert includes a live band and all the record-breaking hit songs from the beloved soundtrack. Learn more and get your tickets here.Â  Experience Harry Potter and the Deathly Hallows alongside the Houston Symphony this summer. Families can enjoy the full film set to a live symphony orchestra either June 10 or 11. Learn more and get your tickers here.Â  Click to expand Houston Symphony Visit the Museum DistrictÂ  All summer long, the Childrenâs Museum Houston has events, meet-and greets and activities planned to celebrate summer. From Princess Day to Kidpendence day with Captain America, thereâs something for everyone during âFun Summer Vibes.â The Cockrell Butterfly Center at the Museum of Natural Science is always a family favorite for all ages. Here you can walk through a living butterfly habitat. This mini rainforest contains several plant species, a 50-foot waterfall and an estimated 2,000 butterflies.Â  Cool off at a Splash Pad Gateway Fountain at Discovery Green is one of the most popular splash pads in all of Houston. With 14-foot-high jets and downtown city views in every direction, thereâs so much fun to have at this iconic park.Â  Levy Park is another great family destination near the Galleria. This unique park has hills to climb, a rock wall that leads to a slide, games and a water feature that dumps those standing below. Families can also enjoy quick bites, such as Love Shack, within steps of the play area. Â Â  Click to expand Levy Park Brewery Tour Around Houston Â  What better way is there to cool off than sipping on a chilled beverage? Karbach Brewery offers plenty of shade and games in their biergarten and itâs also family friendly. Take your friends, children and fur babies for a refreshing afternoon outing.Â  St. Arnolds is another great brewery with plenty of outdoor activities for kiddos. You can also check out their anniversary party taking place on June 28, which will include live music, local artists and special variations of Art Car IPA on draft while supplies last.Â  These are just a few ways to spend time together as a family in Houston. For more ideas and ways to explore the city visit https://www.houston.org/living-in-houston.Â  Â
Read More

How many people chose to move to Houston last year as the pandemic shook up the job and quality of life priorities of Americans? Turns out, quite a few, according to a new ranking from major moving company Penske. Â  Houston ranked No. 1 on the companyâs latest list of Top 10 Moving Destinations. The ranking is based on Penskeâs one-way truck rental data for the 2021 calendar year. The truck giant says 2021 was an incredibly robust year for rentals, a trend thatâs continued into 2022.Â  More than 20% more Americans moved in 2021, compared with 2020, and the new remote work opportunities allowed as many as 23 million Americans to relocate, according to the U.S. Census Bureau.Â  Penske reported that most of the moves in 2021 were into the Sun Belt region, including four major metro areas of Texas: Austin, Dallas, San Antonio and, of course, Houston, which ranked No. 6 on last yearâs list. After a five-year hiatus, Chicago was back on the list at No. 10, and Charlotte reemerged in the No. 4 spot after a break since 2018. Penske first started compiling the list in 2010. Some of the cities that have repeatedly shown up through the years include Phoenix, Houston and Orlando. Â  Here's the breakdown of rankings in 2021 compared with where they ranked in 2020.Â  Houston, TX (6) Las Vegas, NV (1) Phoenix, AZ (2) Charlotte, NC (Has not ranked since the 2018 list.) Denver, CO (3) San Antonio, TX (9) Dallas, TX (8) Orlando, FL (7) Austin, TX (4) Chicago, IL (Has not ranked since the 2015 list.) In another measure of Houstonâs growth, the region was one of only a few major metros in the U.S. to see its population grow during the worst period of the COVID-19 pandemic between July 2020 and July 2021, according to newly released Census figures.Â  The nine-county Houston metro area added 69,094 new residents during the 12-month period. That took the regionâs population to 7,206,841, up from 7,137,747. While a few other major metros such as Dallas, Phoenix and Atlanta also experienced gains, most including Los Angeles, New York, Chicago, Miami and Washington D.C. saw population declines.Â  Learn more about where people are moving in this region in the April edition of Houston Economy at a Glance.Â
Read More