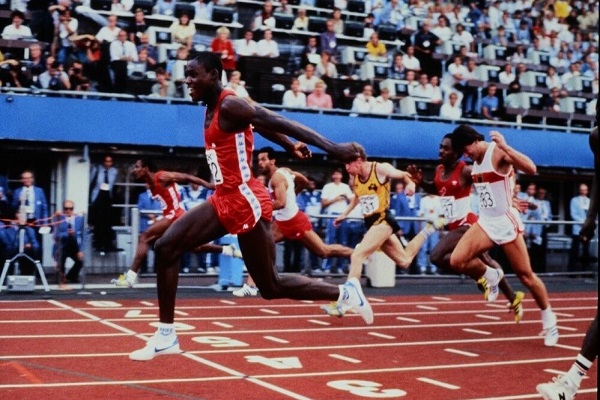 The Tokyo Olympics, postponed last year due to COVID-19, kicks off July 23 and features over 11,000 athletes from around the world. More than 500 athletes will represent Team USA from across the country, including notable Houston athletes such as Simon Biles, Lawson Craddock and Kelley Hurley.

As the world looks to Tokyo for this summer’s major sporting event, we’re taking a look back at some of the world-renowned Houstonians who competed in the Games. Here are five remarkable Olympic athletes from Houston who elevated the nation's fourth largest city to this international stage.

The professional tennis player, who reached a career high No. 4 world ranking in 1989, represented the U.S. at the 1988 Seoul and 1992 Barcelona Olympic Games. In 1988, Garrison brought home a gold medal in doubles and a bronze in singles. Garrison was also a runner-up at Wimbledon 1990, where she was the first African-American woman since Althea Gibson to reach the Grand Slam final, and a three-time Grand Slam mixed doubles champ.

Raised in Houston’s Fifth Ward, 19-year-old Foreman won the heavyweight gold medal in boxing at the Mexico City 1968 Olympic Games as an amateur. Foreman boxed at a professional level from 1969 until 1997. His career finished with a record of 76-5, including 68 wins by knockout.

In 1983, Foreman founded the George Foreman Youth and Community Center in North Houston, dedicated for kids to be active and involved in educational activities.

The University of Houston alum won nine Olympic gold medals, a silver and 10 World Championship medals in track and field. Voted as the “World Athlete of the Century” by the International Association of Athletics Federation and as “Olympian of the Century” by Sports Illustrated, Lewis’ successful career led him to become one of the greatest athletes to ever emerge from the University of Houston.

Born in Houston, Guidry-White won gold medals in the 4x100 meter relay at the 1992 Barcelona and 1996 Atlanta Olympics. Her speed, physique and dedication also won her a gold medal in the 1995 Gothenburg World Championships.

Guidry-White, aka ‘Ms. Turbo’, currently holds the American record for 4th best indoor 60-meter (7.04 sec) and 200-meter (22.73 sec), and 8th best outdoor 200-meter (22.14 sec). After a successful career as a sprinter, she pursued a career in social work, returning to the professional path she once paused to excel as an athlete.

Biles, with a total of 30 Olympic and World Championship medals, is heading into the Tokyo Olympics with a winning record. Recently described as “the greatest gymnast of all time” by Time Magazine, Biles continues to elevate the standard for the world of gymnastics. At the Rio 2016 Olympic Games, she became the first female U.S. gymnast to win four gold medals at single games.

Biles is also the first gymnast to win three consecutive world all-round titles. With Michael Phelps and Usain Bolt retired, Biles is the biggest singular athlete to follow at this year’s Games.

Bayou Business Download: Housing in Houston, A Look at the Single-Family and Multi-Family Market

In this episode of Bayou Business Download, we discuss Houston area housing markets. Following a boom year for single-family home sales in 2020, how is 2021 shaping up and what are the forces affecting the trajectory of the market? Meanwhile, what's the outlook for the multi-family apartment market where developers have delivered tens of thousands of new units in recent years just as the region is dealing with the coronavirus pandemic?Â  We're joined once again today by Partnership Senior Vice President of Research Patrick Jankowski for this conversation. We will also cover:Â  Changes in home values across the regionÂ  The effect of supply chain issues on new constructionÂ  The effect of a weak jobs recoveryÂ  Â  Get the latest home sales figures and additional data.Â
Read More

Statement Attributable to Bob Harvey, President and CEO, Greater Houston Partnership "We are pleased the Texas Transportation Commission has maintained the NHHIP within the stateâs master transportation plan. We believe the project offers an unprecedented opportunity to improve Houstonâs transportation safety and mobility, and we appreciate TxDOTâs continued investment in the Houston region. We will work closely with local and state leaders to resolve any outstanding issues with the Federal Highway Administration over the next 90 days, as outlined by TxDOT, so that we can move this transformational project forward." Â
Read More

The Houston DiverseCity Summit will inspire action to advance equity and inclusion in the greater Houston region. The Summit offers content for companies and organizations of all sizes with a focus on best practices…