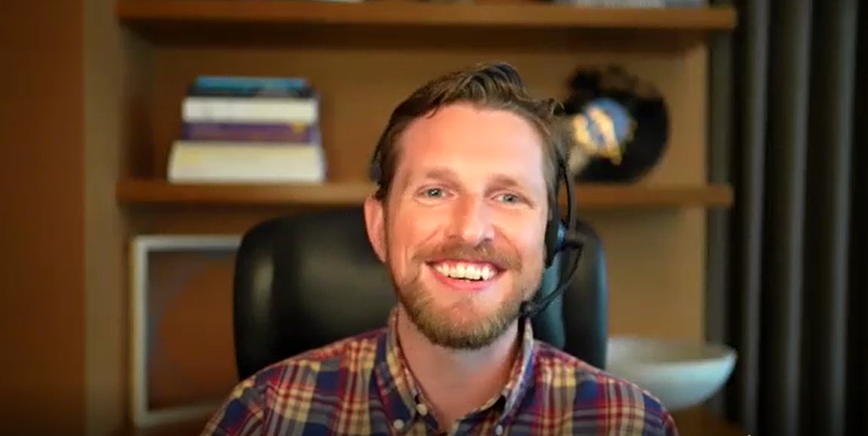 In an entrepreneurial career that’s helped spawn some of the most recognizable company names in the tech world, Matt Mullenweg has become an evangelist for the concept of distributed work.

Mullenweg realized as a young adult growing up in Houston that the internet offered a means of connecting with some of the smartest people in any given field around the world. And you didn’t have to be in the same physical space to actually create things together.

The co-founder of Wordpress, the wildly successful open source content management system and website building platform, knew he was on to something when programmers worldwide worked to help build and improve upon that platform. Roughly 600 programmers worked on the most recent version of WordPress, only a fraction of which work full time for the company.

Today, Mullenweg’s open source tech company Automattic, which he founded in 2005, has a distributed workforce of 1,300 people in 77 countries. He spoke this week with HEB President Scott McClelland about distributed work, diversity and inclusion and the need for companies to adapt to a changing landscape, in a fireside chat. The conversation was part of the Partnership’s annual Houston NEXT: An ERG Summit.

“Words create reality,” Mullenweg said, describing how he differentiates between remote and distributed workers. “Remote suggests that there’s someone central and someone remote who isn’t. We tried to think of a word that captured the idea of being very close to each other in our work, but not physically in the same space. Distributed is the word we chose.”

That distributed approach gives employees a great deal of personal freedom and autonomy to get the job done in a space of their choosing and in their own way. “When people are really happy and fulfilled in the rest of their life, they bring their best self to work,” Mullenweg said. “They’re more creative, they have more energy, and for every person what that looks like is different.”

The COVID-19 pandemic has forced a lot of companies that might never have seriously considered allowing employees to work remotely to do just that. And for many who’ve seen productivity and quality actually increase, it’s been a wakeup call, Mullenweg said. “This has allowed us to break out of the ossification of ideas,” he said, adding that companies need to be able to adapt to both crises and gradual change or risk becoming obsolete.

Automattic is well-regarded for its diversity and inclusion efforts, and Mullenweg touched on why. “Talent and intelligence are equally distributed throughout the world, but opportunity is not, and we can see that,” he said. “If our company is able to provide that opportunity where it hasn’t existed, then we benefit.”

Automattic has also upended the traditional hiring process. Managers don’t look at where a candidate went to school or even their employment background. Rather, Mullenweg said, jobs are open to anyone, regardless of their background, if they are able to exhibit the necessary skills through a trial run at the job.

He said even before the pandemic struck, the company actually did a lot of its hiring remotely via chat, sometimes not even seeing the individual. “Some people don’t do well in a traditional interview, but that doesn’t mean they won’t be good at the job,” he said. “Our approach has been great for creating a more equal playing field for everyone who wants to join the mission.”

The number one thing businesses need to do, according to Mullenweg? Embrace change. “We have all had to adjust with COVID,” he said. “If you really try to hold on to the way things worked before, it’s going to be really tough. And it’s going to be tough for the people on the front lines of your business. Open things up more.”

Check out Matt Mullenweg’s Distributed podcast and learn more about the 5 levels of distributed work.

One Houston Together: The Business Community's Role in Addressing Racial Inequities

Through a series of webinars held this month, theÂ Partnership's One Houston Together initiative has explored multiple facets of racial inequity in our community, from how race impacts access to quality education to its effect on residents' health outcomes. Now, armed with this knowledge,Â what can individual companies and the broader corporate community do to help eliminate the disparities?Â  The fifth installment of theÂ One Houston Together webinar series looked at the Business Community's Role in Addressing Racial InequitiesÂ and featuredÂ LaTanya Flix, Founder and Principal, CauseAdvance;Â Ingrid Robinson, President, Houston Minority Supplier Development Council; Nicole Zhao, Senior Consultant, Human Capital, Deloitte; and moderator Bob Harvey, President and CEO, Greater Houston Partnership.Â  Before the conversation got underway, Partnership Board Chair Bobby Tudor gave an update on the progress of One Houston Together, reminding the audience of the organization's commitment and the principles guiding its actions. âOne thing thatâs really important to us at the Partnership, and certainly to me as the Chair, is that this needs to not just be about dialogue but about action," Tudor said.Â âWe are committed to actions that make things better and lead to a more just and racially inclusive community in Houston, and in particular the business community in Houston.â We invite you to watch the full conversation by clicking the video recording to the right. Discussion topics included:Â  How specific companies and organizations have begun to take action.Â  Ways that companies can make sure their efforts are meaningful instead of "checking a box" Specific company efforts at diversity, equity and inclusion that work, and those that do not.Â  Reducing implicit bias at key points in the talent life cycle.Â  The obstacles that remain for minority-owned businesses and how companies can increase their supplier diversity.Â  How businesses and organizations can act beyond their own walls to address racial inequities in the community.Â  âWhen the business community is serious about an issue, they establish clear benchmarks on what they are trying to achieve and they hold themselves accountable," Harvey said. "If weâre serious this time about racial equity and justice, then we should set benchmarks for our communities that go beyond what we can directly impact in our businesses. WeÂ should hold ourselves accountable for how weâre shaping, orÂ helping shape, the community.â Learn more about One Houston Together. Register today for our upcomingÂ Houston NEXT: An ERG Summit onÂ Oct 16.Â  Watch previous One Houston Together webinars:Â  Understanding Racism Education and Racial Inequities Health and Racial InequitiesÂ  Developing Equitable CommunitiesÂ
Read More

One Houston Together: Developing Equitable Communities

Historic gaps in equity and access to opportunity continue to adversely impact communities across Houston. Today, a personâs zip code remains one of the best indicators of their health and wealth. But there are renewed efforts to close the gaps in equity in our regionâs communities.Â  The fourth installment of the Partnershipâs One Houston Together webinar series looked at Developing Equitable Communities and featured Â Duwain Pinder, Associate Partner, McKinsey and Company; Kyle Shelton, Deputy Director, Kinder Institute for Urban Research; Robert Bullard, Distinguished Professor of Urban Planning and Environmental Policy, Texas Southern University; and Susan Rogers, Director, Community Design Resource Center at the University of Houston College of Architecture and Design.Â  We invite you to watch the full conversation by clicking the video recording to the right. Please note: There is a brief gap in the video recording after the 4-minute mark. We apologize for this technical issue.Â  Discussion topics included:Â  What it means to create equitable neighborhoods and communities and how we address the historic roots of inequitable policies and systems. The importance of including justice in racial equity efforts. How disasters can widen the equity gap in neighborhoods and the need for resiliency in both physical and social infrastructure.Â  How Harris County added a lens of equity to the distribution of flood resiliency funds and projects. Defining the racial wealth gap and how closing it can benefit the economy.Â  Can public and private funding resources effectively work together to impact equity. Why the issue of systemic racism precludes the development of equitable communities and cities.Â  Beyond government, the role businesses and industries can play in addressing racial equity and justice.Â  Additional Resources:Â  âInvisible Houston" by Robert D. Bullard McKinsey & CompanyÂ study on The Economic Impact of Closing the Racial Wealth Gap Learn more about One Houston Together.Â  Below are other events related to the series. All One Houston Together virtual events are free to register:Â  The Business Communityâs Role in Addressing Racial Inequities â Sept 29Â  Houston NEXT: An ERG Summit â Oct 16Â  Watch previous One Houston Together webinars:Â  Understanding Racism Education and Racial Inequities Health and Racial InequitiesÂ
Read More