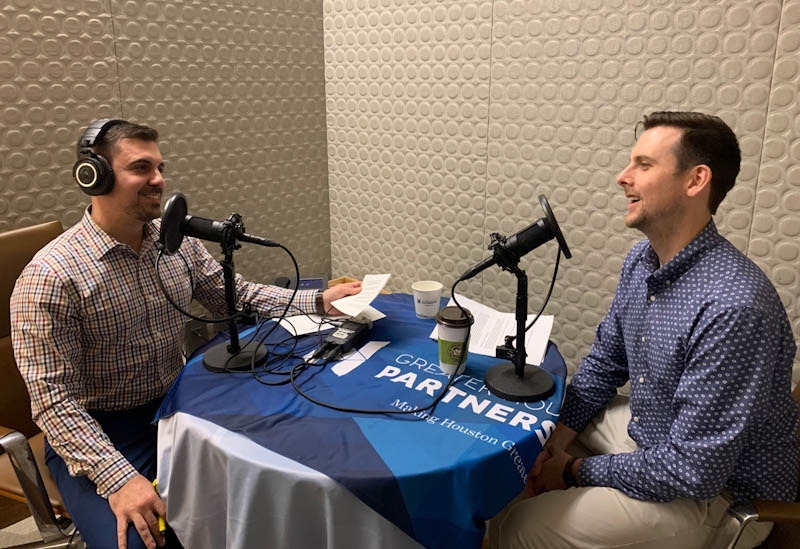 Bayou Business Download is a podcast from the Greater Houston Partnership that dives into the data and analytics influencing the region’s economy and the core business sectors that drive Houston’s growth.

On this edition of Bayou Business Download, we chat with Partnership Director of Data Analytics Josh Pherigo about the state of Houston’s startup and funding scene going into 2020. What happened in the VC landscape in 2019 and what does that suggest about the year ahead?

Here are 5 key takeaways from Pherigo:

Listen to this and future episodes of the Bayou Business Download podcast here. Get updates on key economic indicators and other data and analysis from the Partnership Research team here.

Greentown Labs, the cleantech startup incubator that earlier this summer announced plans to open a Houston facility in 2021, has chosen a spot on the south side of Midtown near the much-anticipated Ion innovation hub to build its incubator.Â  Greentown Houston is expected to open in spring 2021 with more than 40,000 square feet of prototyping lab, office, and community space for about 50 startup companies, totaling 200 to 300 employees. The facility will be within the footprint of Rice Management Companyâs 16-acre Innovation District, anchored by the 300,000-square-foot Ion.Â  Greentown Labs announced its first-ever national expansion to Houston in June 2020, with the goal of accelerating the energy transition through entrepreneurship, innovation, and collaboration. Greentown is the largest climatech and cleantech incubator in North America, headquartered just outside of Boston and providing space for about 100 member companies. "In order to meet the urgent challenge of climate change, we must engage the talent and assets of major ecosystems around the country,â said Greentown Labs CEO Emily Reichert. âWe look forward to catalyzing the Houston ecosystem's support for climatetech startups as we work together toward a sustainable future for all.â Greentown Houston joins a growing number of startup support organizations and startup companies already located or locating in the Midtown Innovation District, as well as Houston-based accelerator programs including MassChallenge, gener8tor, Impact Hub Houston, and others. Greentown will be located on the site of a former Fiesta grocery store.Â  "What we love about Greentown Labs as much as its commitment to helping Houston become a leader in energy transition and climate change action is its proven track record of job creation through the support of local visionaries and entrepreneurs," said Ryan LeVasseur, Managing Director of Direct Real Estate at RMC, the developer of The Ion and the Innovation District. "Greentown Houston, like The Ion, is a great catalyst for growing the Innovation District and expanding economic opportunities for all Houstonians. We're thrilled Greentown Labs selected Houston for its first expansion and are honored it will be such a big part of the Innovation District moving forward." The location in the Innovation District also positions Greentown Houston close to local universities with strong energy- and cleantech-focused programs, including Rice University, the University of Houston, Houston Community College, and other leading educational institutions. The site is less than two miles away from downtown Houston, and will provide entrepreneurs with access to investors and corporate and civic leaders. Finally, itâs located steps away from a Houston METRORail stop and accessible by a new, on-street protected bikeway. "We are so pleased that Greentown Houston will locate in the heart of the Innovation District, where they will seamlessly integrate into the region's robust energy innovation ecosystem of major corporate energy R&D centers, corporate venture arms, VC-backed energy startups, and other startup development organizations supporting energy technology," said Susan Davenport, Chief Economic Development Officer at the Greater Houston Partnership. "Houston truly is the hub of the global energy industry, and Greentown Houston will ensure we continue to attract the next generation of energy leaders who will create and scale innovations that will change the world." Learn more about Greentown Labs,Â Houston innovation and the energy industry.Â  Â
Read More