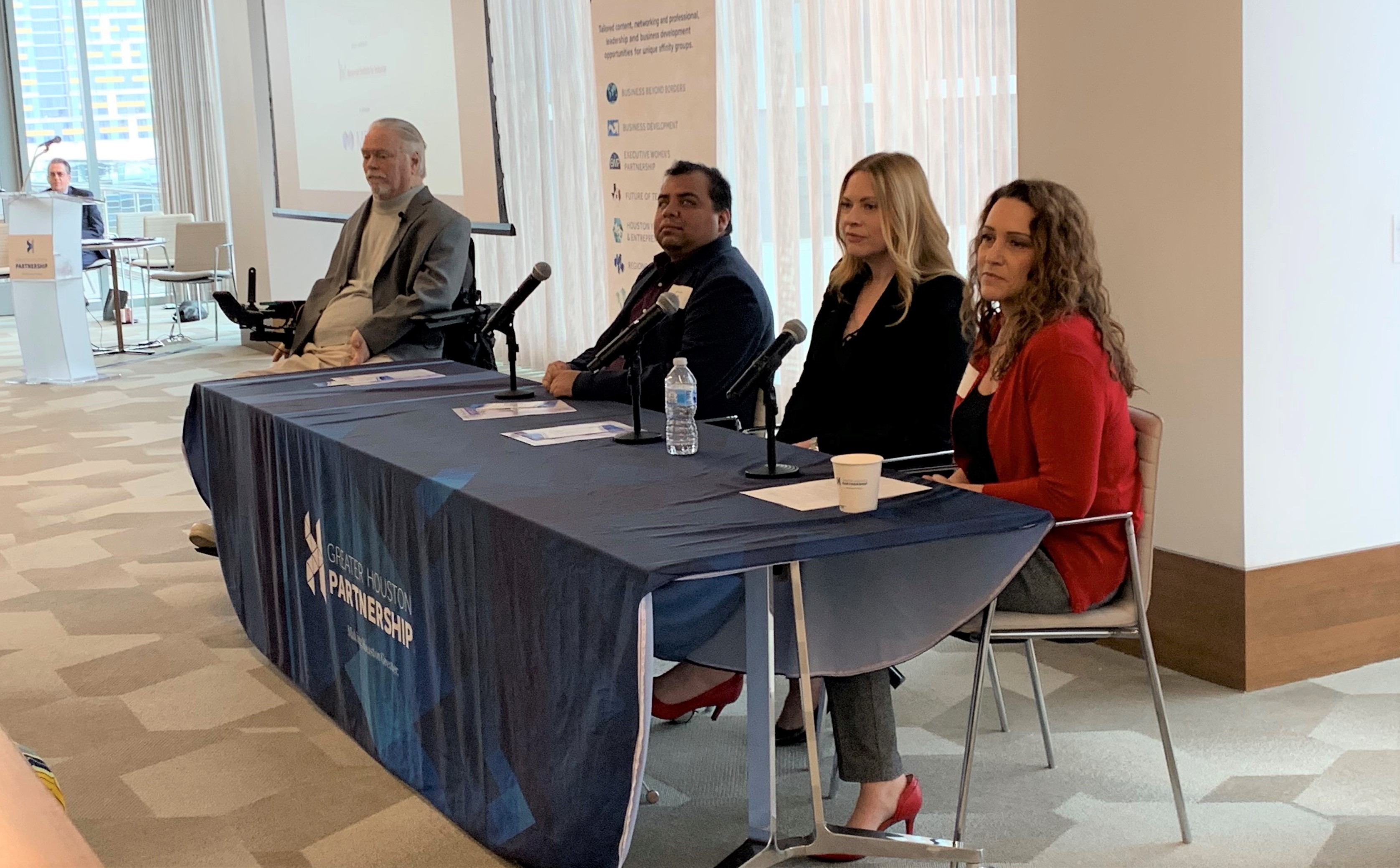 Creating more diverse and inclusive workplaces in this region for individuals with disabilities was the focus of ReelWorkplace, a lunch and panel discussion hosted by the Greater Houston Partnership's Talent Resources Group to help kickoff the ReelAbilities art and film festival.

This year marks the 30th anniversary of the signing of the Americans with Disabilities Act. The ReelWorkplace event was designed to create a dialogue around the challenges those with disabilities face in the workforce. More than 80 people representing Fortune 500 companies, school districts, small businesses, nonprofits and other organizations participated in the discussion.

“When the ADA was passed, it was meant to be a regulatory floor to build upon, to develop a real path toward inclusion,” said Philip Tenenbaum, senior partner with the global consulting firm Mercer. He's also board president of Jewish Family Services, whose Alexander Institute for Inclusion puts on the ReelAbilities festival. But three decades later, many companies and organizations continue to do the bare minimum when it comes to accommodating those with disabilities, Tenenbaum said. What’s more, the employment rate for those with disabilities is no better than it was in 1990.

“The truth is all of us are facing a changing workforce and the time is now to leverage the talent and abilities of everyone who wants to work,” Tenenbaum said. “We must lower the barriers and create pathways to employment.”

Lex Frieden, a professor at UT Health Sciences Center and a leading disability policy expert, moderated the panel discussion. Frieden was one of the architects of the ADA and is serving as honorary chair of this year’s ReelAbilities festival. He was joined on the panel by Gabe Cazares, head of the Houston Mayor’s Office for People with Disabilities; Angela Berg, a partner in Mercer’s diversity, inclusion and engagement practice; and Tarra Reynolds, talent management process owner with Chevron.

Reynolds discussed her role in helping develop a more inclusive workforce at Chevron, specifically a company-wide effort to reach out to employee candidates with both visible and hidden disabilities. Today, the company’s ENABLED employee resource group for those with disabilities has more than 1,100 members, mostly in California and Texas. The company scored a 100 on the American Association of People with Disabilities most recent Disability Equality Index.

For its part, Berg said Mercer has worked to better understand the dynamics of companies’ decisions to develop a more diverse and inclusive workforce. Berg explained what the organization found is that inclusion is the more critical component of the equation. Organizations that focus on diversity in the hiring process more so than creating a truly inclusive environment that offers equal access to opportunity, pay and experience are unable to keep those employees. “The leadership team must be aligned with the goal of inclusion,” she said.

Companies looking to establish a welcoming workplace for those with disabilities shouldn’t wait for candidates to knock on the door, Berg said. Those candidates, she pointed out, may be reluctant to apply if they don’t see others like them already in the organization. Companies can go into colleges to recruit talented people with disabilities or develop partnerships with organizations helping connect those individuals with jobs.

Cazares explained his office at city hall acts as a conduit to connect residents with disabilities with the programs and services they need to achieve the best quality of life. The office also provides disability etiquette training for companies and their employees.

Houston Mayor Sylvester Turner has set forth an ambitious goal of connecting 20,000 young Houstonians with summer jobs this year as part of city’s Hire Houston Youth program. Cazares said part of that effort is reaching out to young people with disabilities and encouraging them to apply for positions that match their skills. The program, he added, helps young people understand the value of work while giving the employer the experience of having employed someone with a disability.

Reynolds said successfully recruiting people with disabilities, particularly those on the autism spectrum, or with similar neurodiversity conditions, often requires companies to throw out the rule book on traditional processes such as interviews. Expectations like a firm handshake or looking the interviewer in the eye simply aren’t effective tools in those cases. For instance, Chevron has trained interviewers to focus on the individual’s work ability by creating mock projects for evaluation instead of focusing on how the candidate communicates.

“It’s important to be aware of what each specific person is going to need to be successful,” Reynolds said. “Everyone should be comfortable at work.”

The ReelAbilities Houston Film and Arts Festival features more than 60 events across 10-plus days and is the largest festival of its kind in the nation, according to organizers, spanning film, art, music, education and other types of events.

For more on the ADA, visit ADA.gov or call the Southwest ADA Center in Houston at 800-949-4232. For information on the ReelAbilities festival click here. Learn more about the Partnership's Talent Resources Group here.