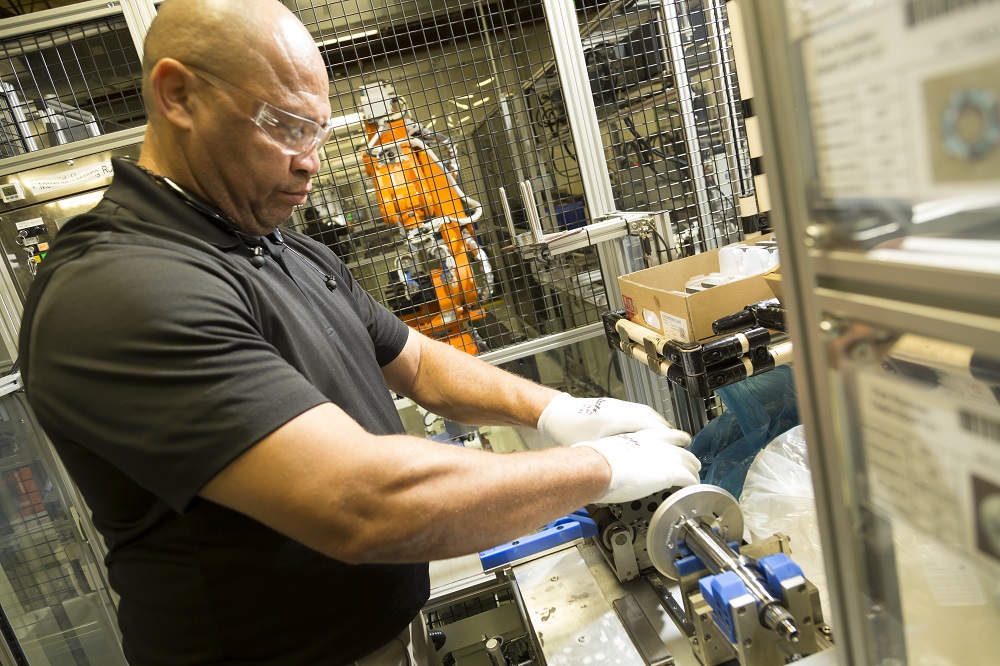 Manufacturing activity in Texas continues to grow, but is starting to slow down. That’s according to the latest Texas Manufacturing Outlook Survey from the Federal Reserve Bank of Dallas.

The survey, released earlier this week, concluded that while factory activity continued to expand this month, it did so at a “markedly slower pace.” The survey noted the production index, an important measure of manufacturing conditions in the state, fell nine points “suggesting a moderation in output growth in October.”

The survey also noted the manufacturing sector’s job growth, which fell in October, but remains positive.

110 Texas manufacturers responded to the Dallas Fed’s survey over a 7-day period.

Survey respondents were also given an opportunity to comment on the challenges and opportunities they’re facing. While many expressed concerns with the current tariffs imposed on the industry, one respondent in computer and electronic product manufacturing reported trade deals were helping their customers and bottom line.

Houston’s manufacturing sector has a strong command in Houston employment and trade.

According to the Greater Houston Partnership's 2019 Houston Facts report, the nearly 6,400 manufacturing establishments in the Houston region employed over 224,000 people last year. That’s about 1 in 13 Houston-area workers in the manufacturing industry, or nearly 8% of total employment in Houston last year.

More than 2,500 Houston manufacturing firms engage in global trade; sourcing materials from overseas, selling their products abroad, or both, according to the Partnership's 2019 Global Houston report. The value of goods manufactured in metro Houston topped almost $83B in 2017 and accounted for nearly 17% of the region’s total GDP.

Over the past decade, at least 517 foreign-owned companies have announced plans to invest in Houston. Manufacturing owns a large share of that with nearly 260 foreign direct investments in Houston stemming from manufacturing in the past 10 years.

The Greater Houston Partnership hosted the 2019 Manufacturing Industry Forum earlier this month, where Rich Wells, Chair of the Partnership's Manufacturing & Logistics Committee, presented findings from an industry survey on the state of manufacturing in Houston.

The short-term outlook among local companies has worsened in recent weeks as the number of COVID-19 cases has increased, and reopening efforts have been put on pause.Â  Nearly 30% of companies responding to the Partnershipâs latest Business Barometer Survey say their outlook is worse this week than it was last week. Just 11% say their outlook is better this week compared with a week ago. Most (80%) of the companies that said their outlook is worse are small businesses with fewer than 100 employees. Nearly 60% say their outlook is the same.Â  About 35% of respondents said their revenues have declined since their last billing cycle, up from 26% who reported such a decline a month ago. Sixteen percent said their revenues have increased since the last billing cycle, down from 22% who reported such an increase in June.Â  Nearly 34% of responding companies say their operations have been severely impacted by the pandemic while another 29% report a moderate impact on operations. Those figures remain unchanged from June.Â  Amid an increase in new COVID-19 cases across Texas, Governor Greg Abbott said on June 25 he was pausing reopening efforts statewide. He also closed down bars and nightclubs across the state and rolled back occupancy limits on restaurants from 75% to 50%. Today, the number of COVID-19 cases in the Houston region stands at 55,365. There were 2,065 confirmed new cases yesterday, July 8.Â  Asked about the impact of reopening efforts that began on May 1st, 7.6% of companies responding to the Partnership survey say they have reopened completely while another 38% say they have partially reopened. Nearly 10% say they have not reopened and nearly 45% report that they did not close.Â  About 67% of companies say they never furloughed or laid off employees while just 1% say they have recalled all employees that had been laid off or furloughed. About 32% say they have recalled all or some of their furloughed or laid employees.Â  About 54% of companies surveyed say they have received Paycheck Protection Program aid while another 10% of companies say they received an Economic Injury Disaster Loan. Two percent of respondents say they applied for federal aid but have yet to receive an answer.Â  As cases have risen, a growing number of companies are not bringing employees back to the workplace. Only 6% of companies have recalled all of their employees since May 1. Forty-four percent have recalled some employees and 46% have not recalled any of their employees.Â  Asked when they expect to resume normal operations, nearly half of respondents say they expect it will take three months or longer, up from 28% a month ago. Roughly 28% of companies say they donât know when normality will return.Â  A total of 98 companies responded to the 11th Houston Business Barometer survey conducted by the Partnership between July 6-8.Â  See results from Week 10. Â  Get information and guidelines on reopening businesses safely from the Partnership'sÂ Houston Work Safe Program. Visit the Partnership'sÂ COVID-19 ResourceÂ page for updates, guidance for employers and more information.
Read More

Texas is one of the best states for businessesÂ to weather economic challenges brought on by COVID-19.Â  As reported by InnovationMap, a new study from Fit Small Business ranked Texas #3 when it came to business owners weathering the economic fallout from the pandemic. Ohio and South Dakota ranked #1 and # 2 respectively. New York was last.Â Â  Click to expand The studyÂ analyzed several metrics, including infection rates, consumer confidence and overall financial health. Texas ranked #1 in the Emergency Reserves & Relief category, which considered the overall reserve of funds the state has to help provide financial relief to those affected by the pandemic. The study noted the state'sÂ adequate economic reserves and unemployment compensation. Authors also cited an articleÂ by Richard Fisher, former president and CEO of the Federal Reserve Bank of Dallas, who called Texas "the case study for economic recovery from the COVID-19 recession."Â  The study also pointed to the state's diversified economy, noting it as a key aspect of a state's ability to recover, andÂ said while Texas has felt some affects of the economic downturn, it has enough resources to weather the storm.Â  See the full study and results from Fit Small Business. Learn howÂ Texas compared to other statesÂ in each of the categories here. Learn more about Houston's diversified economy. Read more about Texas's business-friendly environment in the Houston Regional Market Profile.Â  Register for the next Greater Houston Partnership Economy Series.Â Patrick Jankowski, the Partnership's Senior Vice President of Research, will share a broad overview of major economic impacts from the first half of 2020 and the outlook for the rest of year.
Read More

Partnership Senior Vice President of Research, Patrick Jankowski, will deliver his monthly analysis on Houston's economy by taking a look back at the first six months of 2020. After registering, you will…