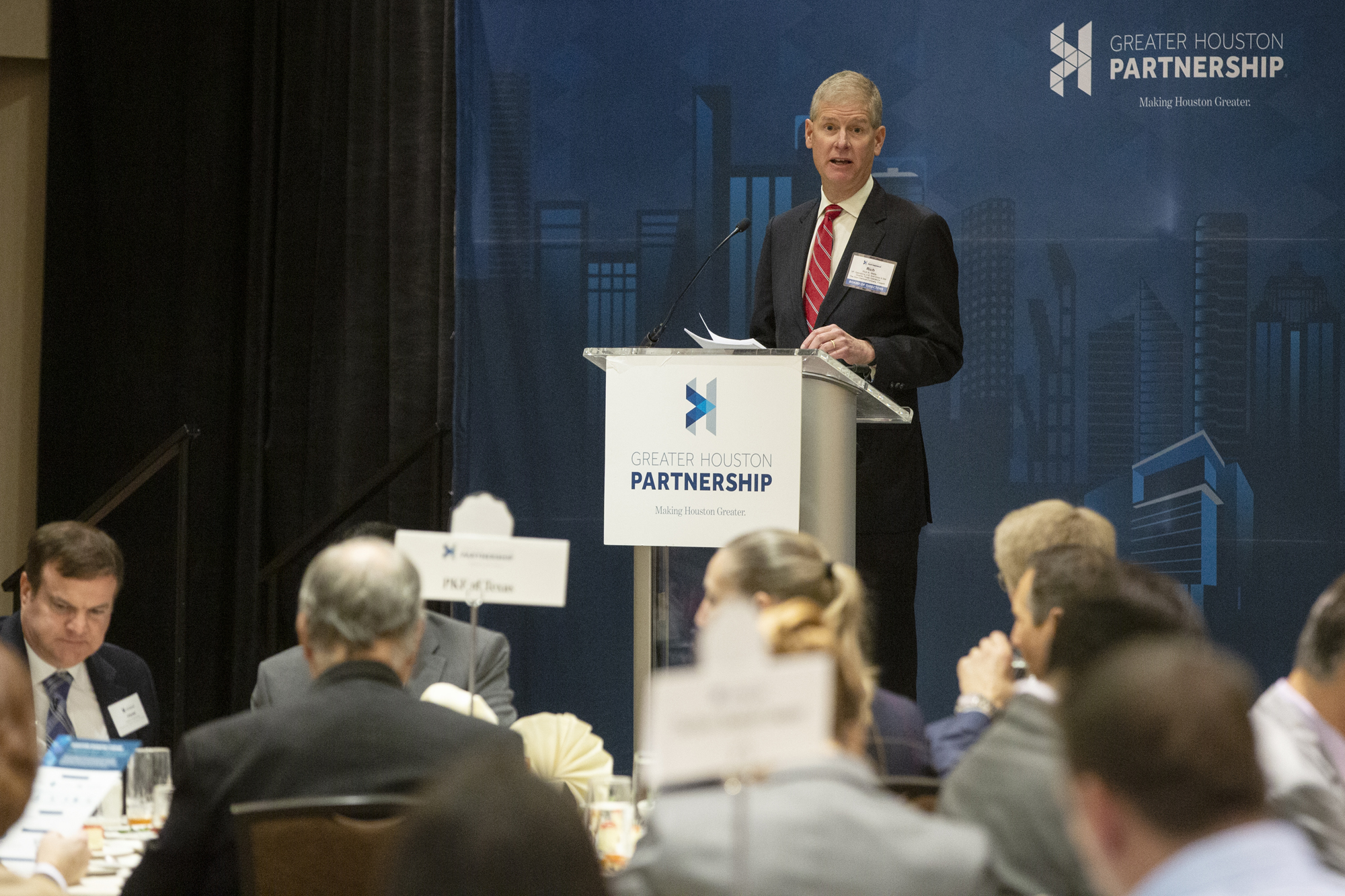 Rich Wells, chair of the Partnership's Manufacturing and Logistics committee

Major manufacturers in Houston are bullish on their expansion plans in the region, which could help bolster Houston’s identity as a hub for various segments of the industry.

That was one of the main discussion points at the Greater Houston Partnership’s Manufacturing Industry Forum on November 6. Mike Molnar, Founding Director of the Office of Advanced Manufacturing at the National Institute of Standards and Technology, gave the keynote address, providing an overview of the national manufacturing landscape.

The Houston region is home to more than 6,400 manufacturers that produce more than $82 billion in products annually. The industry employs more than 230,000 workers and helps drive Houston’s substantial export economy.

The Partnership’s Manufacturing and Logistics Committee is working to target prospective global manufacturers for expansion or relocation to the Houston region. Led by chair Rich Wells, Vice President of U.S. Gulf Coast Operations at The Dow Chemical Company, the committee recently surveyed a subset of 10 companies with significant manufacturing operations in the Houston area to get their perspective on operating here. Together, those companies employ 25,000 local workers, or about 10% of Houston’s manufacturing employment base.

When asked about the perceived strengths of the region to support their operations, the surveyed companies cited the concentration of STEM talent, significant transportation infrastructure, low-cost of doing business and access to global markets.

“As a committee, we were pleased to see that these results align with the way we are already promoting Houston as a manufacturing city,” said Wells.

The companies also cited several specific challenges to operating in Houston, including the threat of natural disasters, poor air quality and poor-quality K-12 schools, among other issues. Wells said the Partnership is working through its various initiatives to tackle each of those challenges.

“We will take the results of this survey and sharpen our work and tighten our pitch to the companies we are working to attract,” Wells said.

In his presentation, Molnar stressed the important role the manufacturing sector plays in the nation’s economy. Approximately 10% of U.S. jobs are tied directly to manufacturing, and it’s in that sector where the vast majority of research and development still happens.

Molnar said that despite the oft-repeated idea that most manufacturing happens overseas in countries such as China, the U.S. still leads the world in manufacturing advanced technology products.

“The U.S. is making more stuff than ever before in our history,” he said. “The golden age of manufacturing is now.”

Texas is the only state that is exporting more manufactured goods than it’s producing, meaning goods manufactured elsewhere in the country, or even abroad, are passing through the state’s ports to be exported to customers overseas. Molnar said that illustrates the critical role Texas plays in the global supply chain.

Certainly, with Houston’s central geographic location relative to the U.S. and to the Americas broadly, along with our numerous logistical and distribution channels, the region is an ideal hub for manufacturing companies that need to reach customers around the world, said Partnership President and CEO Bob Harvey.

Harvey pointed out that the manufacturing industry is in the midst of a transformation, leveraging and developing new digital technologies, including artificial intelligence, industrial internet of things, and additive manufacturing, among others. These changes are apparent at some of Houston’s largest manufacturing companies as well as in the innovation sphere at places like maker space TXRX in East Downtown and TMCx, an accelerator for cutting-edge medical device manufacturing at the Texas Medical Center’s Innovation Institute.

“The exciting work happening in our region positions us well as a competitive place to attract and grow cutting-edge manufacturing companies,” Harvey said.

What Houston Can Look Forward to in 2021Â

Axiom Space will build a 14-acre headquarters campus at the Houston Spaceport where the aerospace company plans to develop its Axiom Station, the worldâs first free-flying, private space station.Â  The project is expected to bring more than 1,000 jobs to the new campus, which will include a 322,000-square-foot facility to accommodate Axiom Station modules as well as terminal space to house private astronauts, operations, engineering and related activities. The campus is being built on the 153-acre first phase of the Houston Spaceport at Ellington Field, less than 20 miles south of Downtown Houston.Â  Axiom Space says its internationally available Axiom Station will serve as humanityâs central hub for research, manufacturing and commerce in low Earth orbit.Â  "While we have confronted the challenges of a global pandemic this year, our work to move our city forward never stops. Todayâs announcement is another leap that demonstrates how Houston embraces humankindâs boldest challenges and lives-up to every bit of its namesake - The Space City,â said Houston Mayor Sylvester Turner. âWith Axiom Space at the Houston Spaceport, we expect to energize our workforce by adding more than a thousand high-quality jobs and engage our communities that are focused and dedicated to the STEM fields.âÂ  Developed by the Houston Airport System, the 400-acre Houston Spaceport is the nationâs 10th commercially licensed spaceport and capitalizes on the regionâs existing concentration of engineering and aerospace talent. Johnson Space Center, which employs more than 11,000 people and utilizes airfields at Ellington Airport, is just minutes from the Houston Spaceport and remains home to NASA mission control.Â  Axiom Space CEO Mike Suffredini said the Houston Spaceport, with its infrastructure and benefits as well as its co-location at Ellington Airport, represents an ideal headquarters location for his company. âThe opportunity to build high-bay hangers where we can assemble the Axiom Station while simultaneously training our private astronauts for missions gives us the flexibility we need as we build the future of commercial space,â Suffredini said.Â  Greater Houston Partnership President and CEO Bob Harvey said Axiom Spaceâs announcement is a game-changer as Houston works to extend its position as a commercial aerospace leader. âHouston is a city built on innovation with a technology-focused workforce, and this move adds to the regionâs momentum as one of the countryâs leading next-generation tech hubs,â Harvey said.Â  Bay Area Houston Economic Partnership President Bob Mitchell said the same environment of innovation that produced many technological advancements in Houstonâs past is creating its next successful venture into space. âThe synergies now being realized at the Houston Spaceport â between Houstonâs dynamic industry partners, its world class training and academic providers, and its far-sighted community investors â are not only benefitting Axiom but will only get stronger over time.âÂ  Across both the public and private sector, Houston is home to more than 23,000 aerospace professionals and roughly 500 aerospace and aviation firms and supporting institutions.Â  Learn more about Houstonâs aerospace and aviation sectorÂ and Axiom Space.Â
Read More

This special two-part webinar dives deep on COVID-19's impact on supply chains and the wake up call for reshoring Of products now sourced offshore, 20 to 30% would be more profitably sourced domestically.…