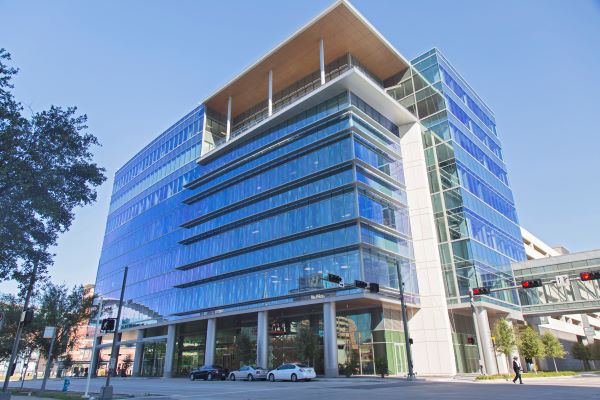 HOUSTON (January 26, 2021) – The Greater Houston Partnership outlined some of the steps needed to grow Houston’s economy in a post-pandemic world, shared the organization’s key accomplishments in 2020, and presented an award to one of the city’s leading business leaders and philanthropists at its annual meeting today.

2021 Partnership Board Chair Amy Chronis, Houston Managing Partner for Deloitte, discussed what Houston must do to ensure it remains a competitive global city in a post-pandemic world. “I suggest it will be those metros whose businesses are focused on developing the technologies and driving innovations that change the world,” Chronis said during the virtual event. “Over time, Houston has both diversified its economy, and more recently, has bolstered our innovation ecosystem…But to build a strong, diverse, 21st century economy, Houston must drive a technological renaissance.” Read Chronis’ full remarks.

Despite the challenges presented by the COVID-19 pandemic and the ensuing recession, the Partnership made considerable progress on several fronts over the last year, said Bobby Tudor, who served as the organization’s 2020 Chair and is also Chair of Tudor, Pickering, Holt & Co. LLC. Tudor, who laid out a plan for Houston to help lead the global energy transition to a low-carbon future at the beginning of his tenure, said energy companies have largely committed to the effort while the region has attracted key new players. One example is North America’s largest “climatetech” incubator Greentown Labs, which announced in June it would open a new Houston facility this year to assist emerging energy companies.

“The momentum in Houston related to energy transition is quite good,” Tudor said. “It will take the continued focus and attention from all of us in the business community to see to it that Houston goes through this energy transition period and comes out of it on the other end with the same global leadership position in energy that we have today.”

The Partnership provided an update on its Houston Next strategic plan designed to advance Houston’s position as a great global city. The plan, adopted in 2019, focuses attention on three core areas: building a strong, diverse 21st century economy; offering a great quality of life; and ensuring opportunity for all. In 2020, the Partnership added that a lens of racial equity should permeate its work to strengthen Houston as a diverse, inclusive and equitable city.

“These have not been easy days for companies in our region, both large and small,” said Partnership President and CEO Bob Harvey. “For nearly a year now, our members and businesses across Houston have struggled to keep employees and customers safe while maintaining operations as best they could. This has proven more difficult for some than others, but time and again I’m amazed by the resiliency of Houston companies to innovate and persevere in the face of significant obstacles. I believe brighter days are ahead for our region.”

Harvey touted other major accomplishments during the year, including economic development announcements from companies such as Amazon and Google Cloud that will add hundreds of jobs. In November, tech giant Hewlett Packard Enterprise said it would relocate its corporate headquarters from San Jose, Calif. to Houston, giving our region another Fortune 500 company. And in a move certain to invigorate the region’s commercial aerospace sector, Axiom Space announced in December it will build the world’s first commercial space station at a new headquarters facility it is constructing at the Houston Spaceport. Read Bob Harvey’s full remarks.

During the meeting, Partnership Board Member and Houston Texans President Jamey Rootes presented the Partnership’s 2021 Robert C. McNair Civic Leadership Award to businessman and philanthropist Richard Kinder. The McNair Award is the most prestigious award bestowed by the Partnership and honors a highly successful business leader who has also made outstanding civic and philanthropic contributions. See release on the McNair award.

Partnership members elected new and returning board members as well during the virtual meeting.  Thad Hill, President and CEO of Calpine, was elected Vice Chair and Chair-elect.

Greater Houston Partnership
The Greater Houston Partnership works to make Houston one of the best places to live, work and build a business. As the economic development organization for the Houston region, the Partnership champions growth across 12 counties by bringing together business and civic-minded leaders who are dedicated to the area’s long-term success. Representing 1,100 member organizations and approximately one-fifth of the region’s workforce, the Partnership is the place business leaders come together to make an impact. Learn more at Houston.org.