The Houston region has quickly become one of the most prominent emerging tech hubs in the country.

Over the past few years, entrepreneurs, investors, academic institutions, local government, and the corporate sector have come together to unite, grow, and promote Houston's startup ecosystem; and the progress is staggering. Today, Houston offers access to key talent, funding and customers, along with the robust support system needed for young startups to thrive.

Every quarter, Josh Pherigo, Director of Research and Data Analytics at the Greater Houston Partnership, takes a data-driven look at the region’s momentum in building a thriving innovation ecosystem through the analysis of venture capital activity and key trends.

The haul from the latest quarter included $373 million across 31 deals. Recipients included some of the most promising young tech firms in the ecosystem. Here are several notable deals from Q2/21:

Cart.com emerges as a top e-commerce startup
One of the most promising tech firms to emerge from the pandemic is the e-commerce-as-a-service company Cart.com. Founded in November ’20, the company has already amassed $140 million in venture capital for its end-to-end shopping platform.

CEO Omair Tariq previously served as CFO of Blinds.com, where he grew the website to $100 million in revenue before it was acquired by Home Depot in ’14. With Cart.com, Tariq and his three co-founders hope to disrupt the e-commerce sector by offering an integrated platform for retailers to scale online.

The company is backed by seven VC firms, including PayPal Ventures and Houston-based Mercury Fund. In early August, investors closed a $98 million series B round that valued Cart.com at $403 million, making it the third highest valued tech startup in Houston. If the results measure up to investors’ lofty expectations, Cart.com could become a landmark company for Houston’s tech economy. 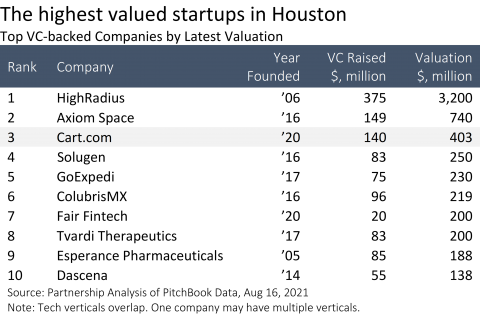 Pandemic tech trends: Health Care, FinTech and Clean Energy lead the way
Seventeen months since the first lockdowns began, we’re getting a clearer picture of how the pandemic has impacted Houston’s individual tech segments. While disruptions from COVID-19 made it harder to for investors to source new deals, fundamental shifts in daily life created new opportunities for many tech sectors.

In Houston, overall VC deals fell by about 20% during the last year. But the companies that did receive funding got more of it. The average deal size doubled as investors poured money into technologies to make life safer, more sustainable and more productive in a year like no other.

HealthTech companies such as Medical Informatics, whose software allows doctors to monitor patients remotely, were more in demand than ever. As were software firms that facilitate online transactions such as the treasury software provider HighRadius, which saw its valuation soar to $3.2 billion. Clean energy also remained a top vertical as sustainability efforts gained momentum.  Here’s a look at Houston’s top recipients of VC deals by tech segment. 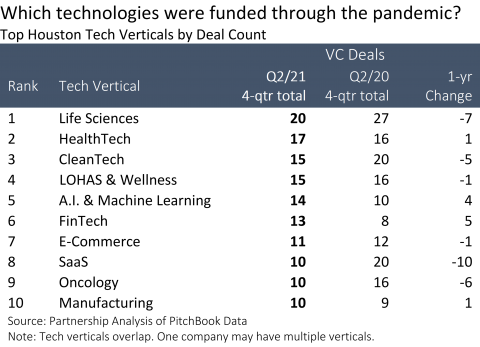 GoCo, WizeHire, Onit make Inc 5000 list
The latest Inc. 5000 list of fast-growth companies was released in August, and 90 Houston firms made the cut. Among the chosen were several notable VC-backed SaaS companies including GoCo.io, an HR software platform, WizeHire, provider of recruitment software, and Onit, developer of automation software for the legal industry. Companies qualify for the annual list if they generate at least $2 million in revenue and have at least five years of sales. They’re ranked by revenue growth over the last year. Combined, the 90 Houston companies on this year’s list created 4,500 jobs in ’20.