The Partnership sends updates for the most important economic indicators each month. If you would like to opt-in to receive these updates, please click here. To receive quarterly economic development updates, click here. 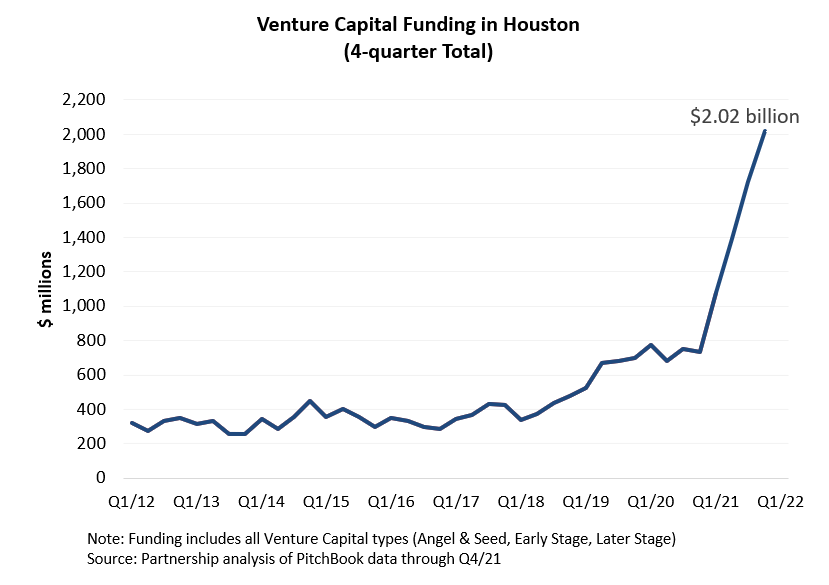 Both investment volumes and deal counts are up compared to pre-pandemic totals. For the four quarters ending in Q4/21, Houston companies closed 219 VC deals, up 26.6 percent from 173 deals the prior year.

The average deal size was $11.6 million during the most recent four-quarter period, up from $5.5 million the year before. Several large, growth stage deals contributed to the jump in funding. The three largest deals of the past year (Solugen, HighRadius, and Lancium) account for over $800 million in VC funding.

On an industry basis, information technology raised $632.1 million in the four quarters ending in Q4/21, up 190 percent from $217.9 million during the prior four-quarter period. Healthcare raised $518.4 million, up 65 percent from the prior period. Materials and resources raised $426.5 million, up 628 percent largely on account of the $357 million Solugen deal. Business products and services (B2B) are up 745 percent, largely due to the $98 million Cart.com deal.  Energy is up 78 percent, and financial services are up 90 percent from the previous 4-quarter period. However, consumer products and services (B2C) are down 64 percent.

Get more in-depth analysis from the Partnership team with a Membership.
Member Benefits