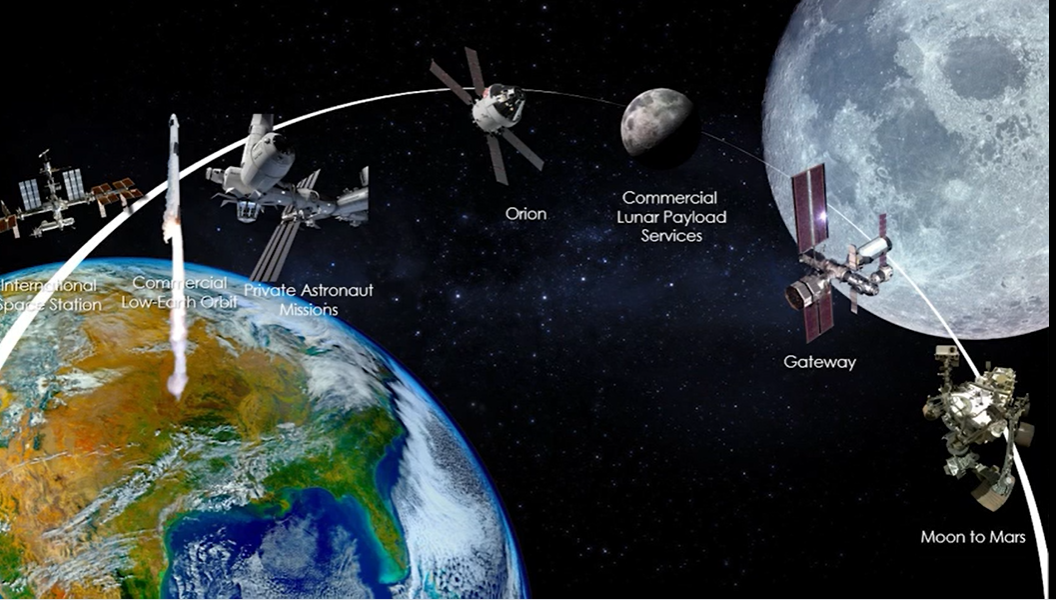 Some of the initiatives happening out of NASA Johnson Space Center

“I want you to think about where we were 10 years ago. We were ending the space shuttle era and were assembling the Space Station, and that’s what we had in space,” Vanessa said. “Now we have a wide array of efforts that are underway as we move forward to the Moon and then on to Mars.”

NASA’s Artemis program will land the first woman and person of color on the surface of the Moon by 2024. This mission is on track, with an un-crewed test flight scheduled to take place before the end of the year.

As part of this mission, the agency is also developing the Gateway, which will allow crews to dock near the Moon’s orbit to acclimate before transferring to the landing systems that will take them to the lunar surface. Once tested, this approach will allow astronauts to move on to Mars on future missions. JSC is also working with a range of commercial partners on its Commercial Lunar Payload Services, which will allow for robotic exploration of the surface of the moon prior to humans getting there.

Many of these partnerships are taking place at the Houston Spaceport, which is serving as a catalyst for growth in Houston’s commercial space industry. It’s proximity and collaboration agreements with JSC are creating a commercial base of innovative companies calling Houston home.

Intuitive Machines is on track to be the first private U.S. company to land its technology on the moon early next year. The Houston based space tech company recently announced plans to build a new 125,000-square-foot building on a 12.5-acre plot at the Houston Spaceport.

“The Houston Spaceport is an incredibly powerful asset to bring academia, government, the private sector together,” said Steve Altemus, President and CEO of Intuitive Machines.

Axiom Space is another Houston-based space company working with JSC. They will be the first company to launch private astronauts to the ISS early next year and are also creating a module which will allow commercial entities to connect into the existing space station. Axiom is currently constructing a 14-acre headquarter campus at the Houston Spaceport.

Other industry leaders joined Dr. David Alexander, Director of the Rice Space Institute, for further discussion the future of the commercial space sector will be in Houston.

“Trained workforce is key for the continued success of Houston as Space City,” said Steve Altemus, President and CEO of Intuitive Machines.

He mentioned San Jacinto College’s EDGE Center located at the Spaceport as a tremendous asset as the region continues to develop the strong technical workforce needed to support the next generation of aerospace companies.

“The innovation taking place in Houston attracts leading companies for collaboration and positions Houston well to be a leader,” said Todd May, Senior Vice President of Science and Space at KBR.

KBR is one of the world’s largest human spaceflight support organizations who last year you became the first company to train private astronauts in NASA facilities at JSC. They are working closely with NASA and today’s most promising space companies including Axiom Space, Intuitive Machines, Blue Origin, Space X, and others.

"The Moon is just an extension of what we’ve been able to do on the International Space Station,” said Tim Kopra, Vice President of Robotics and Space at MDA. “This new effort of exploration provides a platform for other countries to get involved and contribute.”

MDA is a Canadian-based provider of advanced technology and services to the global space industry, working closely with both NASA and the Canadian Space Agency. MDA developed the robotic arm, among other systems, currently on board the ISS. Their next evolution of that robotic arm will support the lunar Gateway program.

Some of the initiatives happening out of NASA Johnson Space Center

Houston Spaceport is getting a new tenant that will host Houstonâs first spaceflight incubator.Â  Collins Aerospace, a unit of Raytheon Technologies, said it will occupy an eight-acre, 120,000-square-foot campus that will support spaceflight and house the incubator. The Houston Chronicle reports the project will break ground in June, with construction slated to wrap up by the end of next year.Â  The new campus will continue to be part of the companyâs Mission Systems business, one of six strategic business units of Collins Aerospace. The 10,000 square-foot spaceflight incubator will create space for startups and universities to collaborate on solving critical space technology challenges, including robotics, medicine and additive manufacturing.Â  Houston Spaceport at Ellington Airport is one of only a handful of commercially licensed spaceports around the country. The facility, located 20 miles south of Downtown Houston, is being built out in multiple phases by the Houston Airport System in collaboration with private sector tenants. Its proximity to NASA Johnson Space Center is a draw for many companies looking to work with, and build off of, NASA technology. Â  âOn behalf of Collins Aerospace, I would like to thank the City of Houston, Houston Airports and Bay Area Houston Economic Partnership for creating a robust business climate and for their strong support of this important expansion of our business,â said Phil Jasper, President of Collins Aerospaceâs Mission Systems business unit. âBuilding on our 40 years in the Houston community, this expansion will further strengthen collaboration with our customer to support spaceflight.â As an anchor tenant of Houston Spaceport, Collins Aerospace will receive up to $25.6 million in financing from Houston Airports for capital improvements. The amount financed will be reimbursed by Collins Aerospace. Collins Aerospace currently has a facility in Houston, which is at capacity, that develops and produces systems for NASAâs human-manned space flight programs. âCollins Aerospaceâs new campus is yet anotherÂ game-changer for Houston as we position our region as one of the countryâs leading next-generation tech and aerospace hubs,â said Houston Mayor Sylvester Turner. âWe are leveraging Houstonâs many advantages, including our dynamic workforce, to fuel the future of aerospaceâ a potentially trillion-dollar, 21st-century commercial space economy.â Bay Area Houston Economic Partnership President Bob Mitchell said his organization has worked very closely with the aerospace community in Houston over the last four decades to help the industry cluster continue to be successful. âThe work Collins Aerospace has brought to Houston for nearly 40 years has provided valuable aerospace career opportunities for Houstonians,â he added.Â  This is the second major announcement for the Houston Spaceport in recent months. In December, Axiom Space announced plans to build a 14-acre headquarters campus there to develop its Axiom Station, the worldâs first free-flying, private space station. That project is expected to bring more than 1,000 jobs to Spaceport and will include a 322,000-square-foot facility to accommodate Axiom Station modules as well as terminal space to house private astronauts, operations, engineering and related activities.Â  Â  Learn more about Houston's aerospace industry.Â
Read More

A Houston-based company is headed for the Moon this year. Intuitive Machines, founded in 2013, is developing a lunar lander to launch later this fall. The company contracted SpaceX to launch its Nova-C spacecraft on a Falcon 9 rocket.Â The company also selected SpaceX for its second lunar mission scheduled for 2022.Â  The lunar landing later this year is one of many "firsts" for Intuitive Machines.Â The company was also the first based at the Houston Spaceport's location at Ellington Field.Â  On this episode of theÂ Small Biz InsiderÂ podcast, we talk with Intuitive Machines President and CEO Steve AltemusÂ about his company's upcoming lunar missions, the future of space exploration through public-private partnerships and Houston's strengths in aerospace innovation.Â Highlights from this episode below. On howÂ upcoming lunar missions are historic The company's upcoming mission to the Moon later this year is the first kind of lunar landing assessment for the U.S. since the Apollo mission nearly 50 years ago. With this robotic landing, Intuitive Machines joins NASA's new era of lunar exploration.Â  "And so here we are, a small business inÂ Houston Space City, returning the United States to the Moon," said Altemus.Â  Intuitive Machine'sÂ CEO said the second lunar mission next year to land an ice-mining drill on the south pole of the Moon is notable because no government or business has ever touched down on the lunar south pole.Â  Intuitive Machines is preparing to announce a third missionÂ thatâs fully commercial set to fly in 2023.Â  On opportunities for aerospace development in Houston Altemus said autonomous systems are essential for future of space exploration.Â  âWhat we should do here in Houston is we should build things," he said.Â "Build spacecraft, build drones, build autonomous vehicles and autonomous systems. And I think coupling our industrial nature as a city with the technology prowess of the city -Â putting those together is really where I think we should attract some businesses.â Intuitive Machine's CEO also notedÂ Houston's significant technical talent in the oil and gas, medical and aerospace sectors, as well as these industries' strong ties to academic institutions.Â  "Houston isnât Silicon Valley and shouldnât try to be Silicon Valley. That community has its own identity." On funding space exploration through public-private partnerships Altemus noted the wayÂ government is working now to move into lunar exploration is through these partnerships that incorporate a mix of federal funding with private capital. He said the model NASA is embracing now is "very powerful and it means that the federal space dollar can go that much further with the compliment of private capital.â Small Biz Insider is presented by:Â  Â  The Small Biz InsiderÂ podcastÂ is part ofÂ our digital series highlighting entrepreneursÂ in the greater Houston region who are making a big impact in the small business community. FollowÂ Small Biz InsiderÂ through these popular podcast players so you never miss a new episode:Â  Listen on Apple Podcasts Listen on Google Podcasts Listen on Spotify
Read More

State of the Airports

The 2021 State of the Airports is sold out.  Join the Greater Houston Partnership as Houston Airports Director, Mario Diaz, describes how Houston’s airports are "Building…