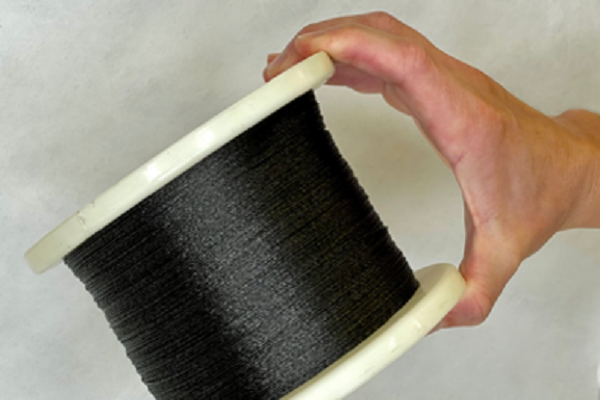 While Houston’s wide-ranging scientific innovations date back to mid-20th century, a discovery in 1985 by two local professors laid the foundation for research and innovation in materials science, electronics and nanotechnology. Dr. Richard Smalley and Dr. Robert Curl of Rice University, and Dr. Harold Kroto of Sussex University won a Nobel Prize in chemistry for discovering a new carbon molecule, buckminsterfullerene.

Houston-based DexMat Inc. is one of various local companies that has emerged from the city’s scientific advancements in the nanotechnology space, positioning it as one of Houston’s top manufacturers of products deriving from carbon nanotubes (CNT). From tape to insulated yarn, DexMat’s patented material “Galvorn CNT fibers” has demonstrated breakthrough advancements in materials science. The Galvorn CNT fibers can be used to create various conductive products and have been recognized by NASA, the U.S. Air Force, and the National Science Foundation, among other elite entities in the scientific community.

The CEO of DexMat, Dmitri Tsentalovich, states that although the product is successful, it has not yet reached the maximum performance of its molecular build-up. ”On average, we’ve been improving the electrical and mechanical properties by about 20-25% a year for the last 20 years,” Tsentalovich said. The cadence of product improvements allows the company to continue growing and innovating new products.

Tsentalovich said he sees Houston’s position as a hydrogen hub as a major opportunity to scale CNT products without generating greenhouse emissions. “You can make them [CNT] with net-zero greenhouse gas emissions while at the same time producing hydrogen.” He also noted the city’s existing infrastructure of energy focused companies creates opportunities for possible adaptations of natural gas emissions to synthesize CNT.

While the products’ conductivity and strength allow for implementation in large technologies, its malleable properties have opened the door for next-gen projects and research.

Sofia Izaguirre, a materials engineer at DexMat, said their product’s flexible characteristics have led to opportunities in the wearable technology space. “The yarn can be sown into a garment, and essentially turn a shirt into a smart shirt [by] connecting it to a hardware,” she said.

Izaguirre said they have partnered with e-textile expert company Hexoskin to explore replacing their current electrodes with Galvorn CNT yarn electrodes. The proposal would improve the products by using more conductible electrodes, according to Izaguirre. She said the CNT electrodes would increase the conductivity with skin by eliminating the need for ECG/ultrasound gel used to decrease skin resistance. The materials engineer emphasized the Galvorn CNT material would improve the contact with skin simply by sowing the fabric with it. “You can sow a shirt with CNT yarn and [have it] act as an electrode (conductor) as it makes contact with the skin,” Izaguirre said.

In September 2020, Rice University announced a $100 million dollar gift from the Robert A. Welch Foundation to establish The Welch Institute. “The goal of The Welch Institute is to attract top researchers from around the world to collaborate with Rice University's internationally renowned faculty and scientific resources, making the Institute a center of intellectual discovery, innovation and transformation in advanced material,” according to a press release.

Estimated to open in 2023, the new institute will join University of Houston’s Center for Advanced Materials as two of the city’s academic spaces dedicated to materials research & development.

With many companies eyeing Houston’s scientific industries, it’s clear a growth for nanotechnology will continue incrementing, following the city’s culture of discovery and innovation.

Learn more about Houston’s energy industries and why it’s set to become the Energy Transition Capital of the World.

Kraken Technologies, Octopus Energy Groupâs software licensing extension, has selected Houston, Texas as its first location for its US headquarters. Kraken Technologies is the foundation of all Octopus products and services, enabling each customer to utilize the energy they need at a price they can afford while supporting a more sustainable world. Its machine learning capabilities allow it to optimize the energy supply chain, which drives energy prices down while increasing customer satisfaction. A year after Octopus Energy established its U.S. headquarters in Houston, the organization saw the potential of Space City as a leading wind and solar generator in the U.S., making it a prime location to establish a Kraken hub stateside. âEnergy is one of the few global sectors still undisrupted by tech â Kraken changes that. It is essentially a big robot that eliminates all the inefficiencies that energy companies have built up over the decades, automating repetitive tasks, allowing humans to do what they are best at, and unlocking smart products,â said Greg Jackson, CEO and Founder of Octopus Energy Group. âWorking with our tech hubs in the UK, New Zealand, Japan and the rest of the world, our new Houston base will be able to expand Krakenâs capabilities to benefit any kind of utilities market, whether regulated or not.â In its first year, Kraken aims to create at least 50 new green jobs across the country while also aiming to attract top tech talent from Space City and beyond. âI am delighted to welcome UKâs Kraken Technologies to the growing list of Texas tech titans,â said Richard Hyde, British Consul General in Houston. âThe decision to make Houston the home of Kraken recognizes this cityâs growing reputation as a tech center. It will bring hundreds of green jobs to the energy capital of the world.â Kraken Technologies will continue to operate under Octopus Energyâs Customer Operations developers as they innovate and evolve their market position through cutting edge solutions. Learn more about corporate headquarters in the Houston region.
Read More

State of the Texas Medical Center

From the world-renowned Texas Medical Center south of downtown to fine community hospitals in outlying areas, Houston boasts medical facilities and expertise second to none. The TMC is a top destination in the world…